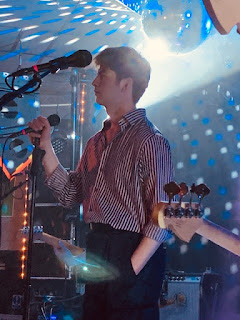 The band of the moment Fontaines D.C. rolled into town with a swagger as they celebrated the release of their superb debut album Dogrel by performing a special matinee performance which included a stunning short, sharp, shock of six songs. Jason Wynne made his way across the Pennines for the first of a double helping.

The afternoon show was part of the album launch on day of release and for those thinking there'd be a watered down version of songs ahead of the full evening performance they were pleasantly surprised as the band delivered a ferocious performance that stunned the crowd into silence.

The Irish quintet don't do things in half measures and this performance will go down in history as one of those "I was there" moments it was that good.

There's an impressive turnout for the near sell-out afternoon show and it's testament to the band that they can lure in so many punters. Many have travelled far and wide, booking days off work, skipping college or just there because they want to see what all the fuss is about with this much talked about band.

Right now the band are on the cusp of something really big. They have a terrific attitude and are in control of their own destiny. If they keep their feet on the ground then the world really is their oyster.
As the band take to the stage the applause is deafening and without even a hello they rip into Chequeless Reckless as they let their music do the talking. Lead singer Grian Chatten prowls the stage darting left, right, back and forth as the harsh guitars screech at breakneck speed and the thunderous drums kick in.

"A sellout is someone who becomes a hypocrite in the name of money" bellows the infectious Chatten as the crowd, complete with their bright yellow Crash Records carrier bags with their prized albums inside, lose themselves in the music. The slow build up before the release of tension..."Tailored dreams of having it all"...it's loud, it's very loud. Looking out to the crowd Grian asks "What's really going on?"

Big is huge. The whole band creating a cacophony of noise. It's shouty post punk at its very best and when you hear Chatten tells us "I'm gonna be BIG!" in that thick Dublin accent you believe him.
The Lotts - a monster of a song on the album - sounds even better live. The Joy Division-like intro matching the movement, the jerks and twitches of an agitated Chatten. Again the slow build up before turning into an angry rant "Devil is the morning and a meiser with a gun". There's something great about hearing the build up of intensity in a song and this is a song that sucks you in and won't let you go. 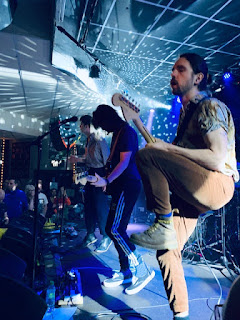 It's relentless as crowd favourite Boys In The Better Land takes it up another level. It still sounds as exciting and fresh as the first day you heard it. With the crowd reaching fever pitch levels it's obvious that this band are on a different level to many bands out there. We get a brief "thanks" off Grian as he's got work to do delivering the rest of the set although we all know the whole band are genuinely appreciative of the support they have.

Hurricane Laughter really does "tear down the plaster" as the guitars do battle creating an excruciating noise. The extremity accentuated by the drums thrashing about. The alarm bells are ringing inside your head as an angry Chatten screams "and there is no connection available" although there clearly is with this audience.

Finishing with Too Real is a master stroke. The Strokes-like intro picks up intensity as Grian roars into life like a man possessed and Carlos O'Connell performs miracles on the guitar playing it with none other than a beer bottle. As the band come together all as one for the last time making a beautiful racket, the Johnny Rotten viciousness of "Is it too reeeealll for yaaaa?" is screamed back at the band with equal intensity.

Six songs, half an hour. Brutal, beautiful and brilliant.

To finish off proceedings in the afternoon the band happily chat, pose for pictures, sign records and various other merchandise as the fans wait patiently in a long line to meet their heroes. The band of the moment might look like they're full of swagger but they're actually well grounded and unassuming individuals who are clearly enjoying the ride they are on right now. Long may it continue.