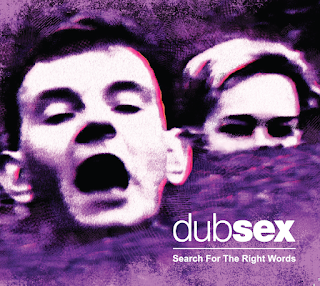 Thirty-three years since their formation, Dub Sex are about to release a compilation of EP tracks, rarities and radio sessions entitled Search For The Right Words. We caught up with front man Mark Hoyle for a chat about the band's history, why they're still here more than three decades later and their plans for the future of Dub Sex.

You've just released a family tree poster that documents the history of the band and the various line-ups you've gone through over the years.  Do you think that the band's line-up being fluid helped in keeping things fresh and keeping the band going when times were hard?

I wouldn't really say that the line-up has been fluid as such ... it's true that we have had a lot of members but this is over a period of more than three decades and it has always been built on rhythm bass and voice ... the very first song that Cathy and myself wrote together Kicking The Corpse Around set a precedent for us that we would re-examine in different ways in future records, but I always love to write on top of Cathy's basslines ... songs like Caved In or Swerve are so perfectly formed at the bass and voice stage that it only takes stripped down and textural guitars to contain the song and keep it under a simmering form of control. Then you can really kick off.

Guitar-wise, Dave Rumney who played on the early recordings died in the late nineties but was part of things at the start. He lived next door to me in the Hulme crescentswith Martin Bramah from The Fall and Blue Orchids, and it was really exciting to do our first Peel sessions together and stuff.

Later, I shared another crescent flat with Chris Bridgett, who recorded our later Peel sessions and The Underneath EP. Hulme was very important to us,it was falling to bits, an abandoned estate, and you could make loads of noise and nobody minded. It was a great place to grow your band.

Chris Cookson, guitarist in the last nineties line up of the band, went on to be Jah Wobble's guitarist, and work with Jaki Liebezeit from Can, and Linton Kwesi Johnson, and all sorts of people.

We even had Chris Nagle on guitar once (at a party for Dave Haslam's Debris Magazine), that was rather special, I must say, to have the producer of these tunes on stage with me. Chris Nagle's input to Dub Sex is often overlooked, and his experience with Martin Hannett made him perfect for us. We worked with Martin too, but it was Chris's patience and intuition that led us to our best work.

The band's name will have created issues in some quarters and possibly formed a distraction for those whose support you needed to push the band. Where did it come from and were there any particular examples where it caused a problem?

Yes. The name, funnily enough, was made up in the dawn of pre-history by Karl Burns (The Fall) who I'd played some music with a few years before meeting Cathy and starting the band in earnest. I always liked it at the time - short, sharp, onomatopoeic - and it always looked great written down, with the symmetry of the lower-case ‘d' and 'b.' The world has become a different place after thirty-odd years though, and googling us can lead you to places you might not want to go … you will get to our wonderful music too of course!!

When you came back in 2013, why did you choose to do that as Dub Sex and not simply form another band as you had with Dumb and Ninebar?

Dumb and Ninebar were totally different bands, although both contained Cathy and myself. In both cases though the approach was similar because it's the way that we work best - bass, voice and textures. We took Ninebar out on tour with Finley Quaye at the height of his Brit Award winning trajectory and it couldn't have been less like Dub Sex, all dub effects and mad samples. At the heart of it all was Cathy's bass and my voice. The two of us alone on stage in these massive venues. Bass and singing. The way it all starts.

Obviously the band's current status means that it's not a full-time proposition at the moment. What motivates you to keep at it and keep Dub Sex alive?

The reformation in 2013 came about because we donated 'Swerve' to a charity album for St.Mary's Baby Unit, and it kind of grew from there... there was never any big plan, and it had to work around everybody's other projects and real lives ... we haven't done many shows since then really, we've just tried to make them all extra-special.

How did the idea for Search For The Right Words come about - and how did you select which tracks should be on it and which not?

I always wanted a release that collected together everything in one place and I wanted to include Snapper, which has always been one of my favourites. The only studio recording we had was from a John Peel session. We spent two days in Maida Vale for that third Peel session, which was unheard of, one complete day of mixing as opposed to a half day, which is why it just sounds amazing. Dale Griffin (Mott the Hoople drummer and BBC producer) really knew Maida Vale, and you can hear it. He died a few years ago, RIP Dale.

And why did you choose not to order the tracks chronologically?

We could have gone chronologically with the album, but we ended up just going with our hearts, as per usual, and it runs beautifully.

Are there any personal and band favourites on the record?

The whole album is full of personal favourites of mine, and I tend to see the whole body of work as one thing. It's been great to revisit songs like Splintered and Play Street, stuff I've not heard for years!!

It's ace to be able to include North by North East from the fourth Peel session, single material in a parallel world. That song has had a long journey on its way to being released, from a hotel room in Sunderland in 1988 to, well, here it is!

It's been nearly six years since you got back together - have you talked about writing and recording new material?

Yes...I've always made music with Cathy, and we've been working on some wonderful new songs over the last year. It's a whole new project, with a whole new approach, but with all the power and beauty that we try to bring to whatever we do. Watch this space...

Is the buzz you get from playing these days different to what you had back in the day - and how has it changed?

I don't think that feeling of elation and the great way you feel when the music is in full flow ever really changes. I still feel like a dog sticking his head out of a moving car window when I hear this uplifting swirl of music and air rushing around me, and probably always will. Hope so!

If you had to sum up the legacy you want Dub Sex to leave, how would you do it?

The records are their own legacy, I think. We crafted with Chris Nagle something really special, and much in the same way as when they were released, there really is nothing quite like them. It's been a labour of love to bring them all together on this album for the first time and I hope they serve as a pure thing in an impure world.

We always had a self-destructive streak, commercially speaking. Being anything but who we were would be impossible to us, and that's a strength in my book - the fact that we didn't bend to market forces is one of the things I am proudest about even now.

I have had an unusual life, and spent many years in council care after a disastrous childhood. I think that if the fact that I could express myself and be part of such great music could ever encourage others to do something similar, well, then that would be the greatest legacy of all ... Oh, and Swerve!!! ... if ever there was a song that resonated with people, well, Swerve is it. It's meant the world to some people, and they've gone out of their way to let me know, both back in the day, and in the thirty-odd years since! I think we can all take a little pride in that.

Search For The Right Words was released on April 5 on CD and can be purchased from here.