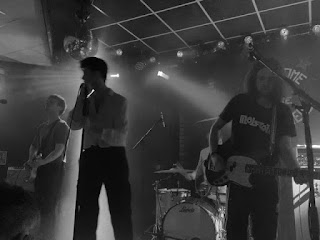 There’s an air of anticipation as Irish post-punk rockers Fontaines D.C. roll into town for the second of their seven date sold out UK tour supporting the release of red hot new album Dogrel. This evening’s show coincides with the actual release date of the album and there’s no better place to celebrate it than at the award winning Brudenell Social Club on the outskirts of Leeds.

The crowd is a heady and healthy mix of old and young. For some of the young ones this is their first ever gig so I’m told……they don’t know how lucky they are - or maybe they do. For the older generation the excitement is even greater and a few people speak of the same kind of tension and expectancy at a Fontaines D.C. gig as they got at an early U2 or Joy Division gig. They even go as far as saying the Irish quintet are on a par with these bands displaying that raw passion and youthful exuberance.

There’s nothing like self-confidence and as the band take to the stage to rapturous applause they start at breakneck speed - pedal to the metal -with the abrasive Hurricane Laughter. They meet the crowd head on with a sonic assault guaranteed to blow the roof off. Grian Chatten is like a man possessed. A caged animal trying to unleash his inner demons. He bounces about, he's agitated, restless, like a coiled spring and he means business.

"I was towelled up to the waist while you were fresh from the confession" spews out Chatten with his opening gambit. He's surveying the crowd, calling us out. The crowd respond in the only way they can by bouncing about and giving back the energy the band are giving them. The moshpit already in full flow screaming the chorus "Hurricane laughter, tearing down the plaster". Guitar God Carlos O'Connell is animated and doing battle with fellow guitarist Conor Curley as the bass of Conor Deegan rumbles and shakes the rooms foundations. There's a ringing noise in the ears that accompanies the repetitive statement "and there is no connection available" - no danger here, the connection between band and audience immediately made.

The groove of Sha Sha Sha hits you right between the eyes. In a recent interview celebrity fan Steve Lamacq asked the band where the term Sha Sha Sha came from. Grian, tongue in cheek, said he couldn’t possibly tell him. Maybe we’re all none the wiser but as the motorik drums and choppy guitars kick in nobody cares as the crowd bounce along to the groove. Chatten tells us "Two men at a rickshaw pumping up a tyre, Tire and tire and tire and tire" in that very distinctive Irish drawl before hitting the chorus, with face contorted, fist in the air, enticing the crowd and shouting out "Sha Sha Sha". 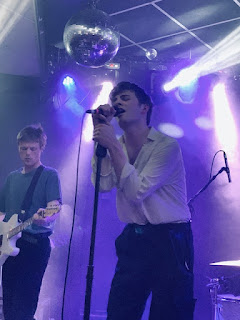 Chequeless Reckless raises the bar higher with its 1960s Rock and Roll intro. Chatten calls it out “A sell-out is someone who becomes a hypocrite in the name of money” and “money is the sandpit of the soul” The crowd surfing is now in full flow and the place is bursting at the seams as the crowd sway back and forth in unison to the music. The guitars chop away, gnawing away at the "empty glass ringing all across the nation". There's a heaving mass of bodies reaching out as Grian asks, on repeat, "what's really going on?"

It's not just comparisons to Ian Curtis with Chatten's stage presence but in the music too with The Lotts. A slow burner at first offering us some respite from the carnage down the front as the bass and guitars tackle each other tentatively initially. The song's hypnotic, like Chatten himself, and the dark Joy Division-like melody gives the song an extra edge. Building up into a crescendo of noise - the frustration inside comes to the fore "Lotts on the corner there ain't nothing here for me". The drums keep everything, everyone, together as the song fades out to crowd and front man exchanging "la la la's"

It's noticeable between songs that Chatten doesn't have much to say to the crowd. A simple "thanks" here and a "thanks very much" there are all you need to hear as he's on a mission to sing the songs as he's clearly in the zone surveying the sweaty, heaving masses hanging on every song. Another soon to be live favourite Television Screens, with it's Cure-like intro, has the attention of everyone in the room, transfixed. "Some become lost, as their passions will see, illustrated well, by the televison screen" sings Chatten showing a finer quality to his vocal than the shouty, angsty one that many are accustomed to.

First single Liberty Belle offers no respite to the buoyant crowd. It’s frenzied, raucous and insane. Think Eddie Cochrane’s Summertime Blues with a sprinkling of John Lydon and you’ve got the perfect punk pop song for the old and the young to embrace together in the now sweaty mosh pit. There's an abundance of stage divers and crowd surfers as "you know I love that violence that you get around here" is snarled by Chatten and for a 47-year old man like myself (and others older who are nearby) it feels like you're 21 again looking out for others, all in it together, living for the moment. You can see the joy on the band's faces. The exterior is one mainly of calmness but you know inside they're buzzing just as much as we are.

You just know after a slow song there's going to be an explosion again and sure enough they give us a double whammy with a two pronged attack of the fast and furious Too Real and the equally high octane Boys In The Better Land. 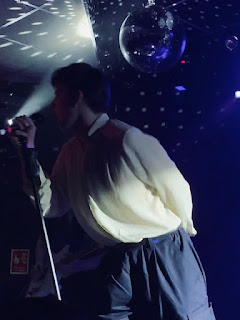 Too Real is a frenzied assault on the ears. Chatten jerks, gesticulates, agitates and confrontates asking us "is it too reeeeeallll for yaaaaa?!" and beating his chest telling us he's "about to make a lot of money" in that now recognisable Dublin lilt. Tom Coll on drums beats us all into submission with his relentless attack. The consistently brilliant Conor Curley and axe-genius Carlos O'Connell have a head-to-head battle to see who can create the greatest noise while Conor Deegan III keeps it all together chugging away at the bass. Cue more stage divers and mayhem.

It's not hard to see why the likes of highly rated Idles are falling over themselves to champion Fontaines D.C. when you see and hear them perform songs like Boys In The Better Land with such fervour and verve. It's raw, passionate and it means something to people. Grian doesn't know whether to stand still or not. One minute he's grabbing the mic stand, holding onto it for dear life, the next he's battering it into submission before going on the prowl again covering every nook and cranny of the stage. The anthemic chorus "the boys in the better land" is repeated with such gusto that it's impossible not to sing along to. The anger and the venom that delivers "Driver's got names to fill two double barrels, He spits out Brits out! only smokes Carrolls" gets the point across perfectly and again the crowd sing from their hearts "If you're a rock star, porn star, superstar, doesn't matter what you are, get yourself a good car and get out of here". The chaotic exuberance of the band transforms over to the crowd and the intensity heightens and it feels like a celebration of how far this band have come in such a short space of time.

The gorgeous Dublin City Sky slows things down much to the relief of the older audience members. A lullaby to the city. Shut your eyes and it could be Shane MacGowan singing in that majestic way that's raw and gritty but can tug at your heartstrings with consummate ease. "As drunk as love is lethal, I spun a lady round, And I kissed her 'neath the waking of a Dublin City Sky". It's easy to see why they're one of, if not the hottest ticket in town right now.

"This is our last one" Chatten tells us. After completing 10 of the 11 tracks off the album already we all know what's coming. Recent single Big is the biggie. It's bold, brave and downright brilliant. Lead singer Grian makes a gallant statement from the off. “Dublin in the rain is mine." For one so young he has a huge stage presence. A mix between Liam Gallagher prowling that stage like a caged tiger, the agitated but alluring Ian Curtis and a Mark E Smith vocal full of crispness rolling those R's "Slick little boy with a mind of rrrrrrrritz". As the band thrash about making a delightful racket Chatten tells us "I'm gonna be big! I'm gonna be big!" Nobody can argue with that. As the band reach the climax of the gig it's evidential there's sweat and tears from both sides and as the music comes to a crashing end all we're left with is a scene of carnage amongst the heaving mass of bodies who have just experienced a band who are unlikely to be playing in venues of this size for much longer.

The buzz outside after the gig is like no other. It feels like you've been hit by a juggernaut, the heart is still racing, the ears are still ringing and the talk is of a band destined for even greater things. The air of anticipation now replaced with an air of expectation. There's no doubting it, Fontaines D.C. are the real deal. Catch them while you can at the smaller venues - they really are gonna be big.