TRACK OF THE DAY : Social Contract - Hoist Their Heads 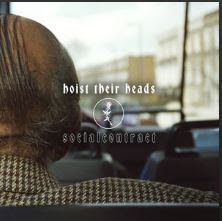 Hot on the heels of their Common Tongue single, South London four-piece Social Contract return today with a new single Hoist Their Heads, a politically and socially charged song that avoids the usual platitudes and calls to arms and instead focuses on calling out inequalities and obsession with stories rather than human impacts.

Social Contract describe themselves as "very light metal" and their Facebook bio is short and sweet simply telling us "I wish I could say, but I simply cannot."

The single takes aim at the disparity of wealth - "You ask why I hate this city. Well the walls are caving in while they bathe in their wealth" - and the way in which the media gloss over tragedy - "Lets use a filter on the face of the girl that died. Romanticise her life and all inside. The city turns to the beat of a drum. Turning over bones on the street" - and don't talk about the real story behind it.