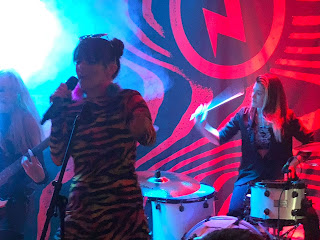 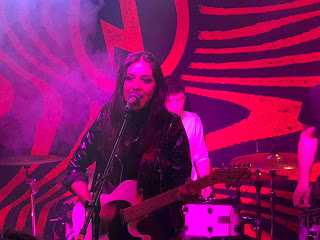 Dollie Demi and Nadia Sheikh headlined the latest This Feeling club night at Jimmy's in Manchester. Two very different bands provided an interesting contrast in style, one rock and roll, the other a melee of garage, pop, punk and all manner of influences but united in their ability to grab the audience's attention.

This is the last night of Nadia Sheikh's tour and she's already got a group of fans down the front, wearing her merchandise and singing along to every song apart from a couple of brand new ones as it feels like she's made a connection with people here and they're keen to support her however they can. Latest single Toxic appears second in the set to knowing cheers of appreciation, big anthemic verses and chorus the order of the day with Nadia's vocal confident and assured, a theme that runs through her impressive half-hour set. 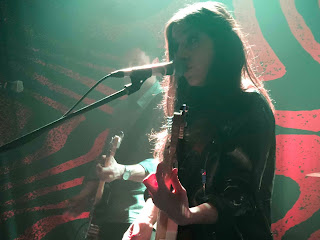 It's two new songs that capture our attention though. Shadows and Fire Away sound like a progression from the rest of the set without compromising on their style and personality on the way. It's always difficult for an out of town act coming and playing one of these nights of local bands, but Nadia takes the right approach in engaging with the audience, encouraging them to join in, particularly on the epic final song Getaway where she encourages us to sing along and chides us for it not being loud enough. The healthy roar of appreciation at the end tells its own story.

You might be forgiven for thinking Dollie Demi are bonkers, they're not, they're going to be a very serious proposition indeed now the band's new line-up is bedding in. They're an intoxicating mix of tongue-in-cheek fun, female empowerment to do whatever the hell you want, one of the best guitarists and rhythm section in town and the infectious energy and hypnotic wonder of their leader Demi, who squats, thrusts, punches and crouches her way through their full-on set of songs with an attitude of take me how I am or don't take me at all.

There's songs where Demi proclaims that someone, and then, after taking off her sunglasses, all of us at the end, are Sexy as F, tells us how she wants to taste our Cigarette and how she wants to B Ur Gal. The next moment though she's laying into a boy who Cries On My Shoulder and takes aim at another who she declares He's Not Getting Some. It might all seem a little schizophrenic and contrary, but it's a perfect encapsulation of the ever-changing nature of human interaction these days where what's happening one minute is contradicted the next. 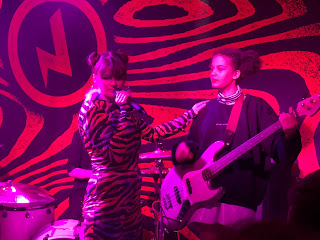 There's a real contrast between her hyper-energy and the studied cool of her band mates who Demi marches up to during the set to try and get a reaction. Ella effortlessly delivers some stunning guitar parts throughout that change the direction of songs and turn them into something out of the ordinary aided and abetted by Mia on bass who seems completely unperturbed by her band mate's attempts to distract her and Gabi's drumming that ties so much of this together. But there's a gang feel to them, a solidarity, solidity and togetherness that tells you not to mess with them.

They finish with debut single Ruby Lips and Demi and Mia out in the crowd among us. In slightly over half an hour they've silenced the chatter in the room, got people out of the seats at the back where the cool kids hang out down the front and charmed a rather out of place stag party. They might not be the most polished band out there, but polished is boring if there's no personality, no energy and no message in what they're doing and Dollie Demi have all three in spades.