Mammoth Penguins - There's No Fight We Can't Both Win 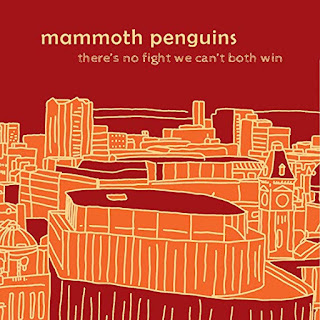 Cambridgeshire power pop trio Mammoth Penguins return with their third long player, There's No Fight We Can't Both Win. Stuart Ralston has a listen to an album from a band that continues to progress their sound without losing sight of their roots.

I first came across Mammoth Penguins back in 2015 whilst listening to Steve Lamacq on 6 Music when Strength In My Legs from the debut long player jumped out at me. There was a freshness to their sound over everything else showcased on that broadcast and debut album Hide and Seek was immediately purchased.

Mammoth Penguins have come along way since Hide And Seek. Follow up, the concept album John Doe (credited to Mammoth Penguins and Friends was a darker affair) and here, There's No Fight We Both Can't Win, singer and guitarist opens up cathartically, sharing eleven candid tales of lost love, breakdown and rebuilding.

The opening lines from There's No Fight We Can't Both Win (from Closure) "never really understood what closure was, last time we met that's what I got" set the tone for the album as Kupa pours her heart out. Meanwhile the band - bassist Mark Boxall and drummer Tom Barden - whip up an upbeat soundtrack. Closure is beautifully augmented with cello (provided by multi instrumentalist Boxall).

The classic punk pop grooves of Dick Move continue the tale of Kupa's lost love. At only two minutes long, it doesn't outstay its welcome before a change of style and pace with the optimistic There Is So Much More. The added backing vocals make Mammoth Penguins sound like The Velvet Underground.

Over the course of this album, Mammoth Penguins again show that they have the ability to create delightful pop music, much in the style as bands like The Pastels - I Wanna and Put It All On You - being prime examples. The epic Let Yourself Be slows the tempo right down and showcases Kupa's vocal talents, there's an honest fragility to her voice whilst the music builds and builds, with layers of swirling guitars and commanding bass lines. The highlight of the album. Cold and Lonely Place is another dominant piece, where the band really crank it up.

You Just Carry On brings the album to an end, and musically, there's a joy and euphoria to the Mammoth Penguins sound, although heartache remains the theme from Kupa's lyrics.

There's No Fight We Can't Both Win is out now on Fika Recordings and can be purchased from their site.