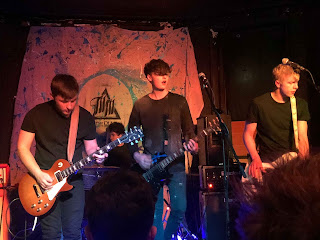 Matter Of Mind celebrated the release of their new single Sunken Revelations with a packed show at Manchester's Star And Garter on Friday night supported by Jekyll and Elephant Trees. A high-energy performance full of crowd participation showed that they're just a break away from reaching a much wider audience.

First up are Elephant Trees. Unfortunately we only catch their last four songs because they're impressive - both in their ambition and the end result. Led by Martha, who one minute channels Ellie from Wolf Alice, the next Thom Yorke and with the four of them venturing from full-on rock to more considered electronic stylings, their songs eschew the normal verse-chorus-verse-chorus-break-chorus structure for something a little more adventurous. Even some struggles with the sound that sometimes obscures what Martha is singing fail to dent that impression. 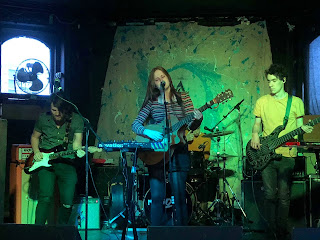 I Don't Know What I Want Anymore is an impressive song that has the gravitas to hold itself up under the weight of experimentation and throwing themselves around the stage that they do. New single 4100 takes them into equally explorative territories and they finish called Evelyn that has an epic ending you'd expect from bands headlining bills in far bigger places than this.

Jekyll also suffer a few technical issues at the start of their set that they take in their stride, joking that they'll do a set of bass improvisations. Fortunately things are soon remedied and Jekyll delight the growing crowd with a six-song set of increasingly impressive maturity. Opening with Lost, their songs are expansive in their intent, similarly built for spaces much bigger than this intimate space. Their recent single Echoes is a prime example and if it's an example of the new material that they're right, it suggests they're remaining true to their base musical instincts but ratcheting up the emotional power that they're attempting to transmit. 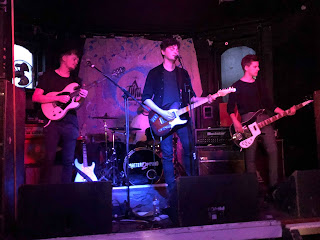 The remaining four tracks are from last year's self-titled EP. This is a slight disappointment in that we'd like to hear more new material, but it's slight because the songs are delivered with such an uplifting passion and power in the performance, that feels constrained by the size of the room and the capability of the sound system, and in Joel's vocals that soar at just the right moments. In a very obtuse way it might actually be what's holding them back; that they've outgrown the venues they're playing in.

The headliners are on the top of their game though. In the past three years they've grown together as an outfit from a raw gang of mates with a slightly nervous looking front man into a band that's got the potential to go a long way given the right breaks, the age-old conundrum for a young band with no management and no means of oiling the industry wheels other than the songs and their live performance and the hope that someone will catch on and take them where they deserve.

Their set feels like a mini greatest hits, covering right back to All In My Mind, their opening track that comes from their debut A State Of Mind EP, through to their latest Sunken Revelations for which they enlist a friend Olly to join in so that Jordan can be freed to play the role of front man more freely. It's an impressive set of songs too and one with a range that many bands of their age and experience don't possess yet. Just A Stranger and Blindside show that they're not just foot to the floor and make as much noise as they can, where as Stay and Sparks In Our Blood demonstrate more anthemic qualities that you could see lighters being raised skywards to in a parallel gig universe. 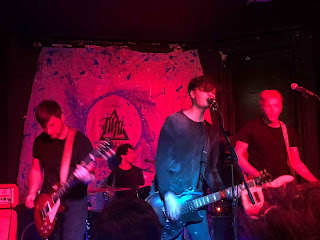 They bring Far Too Wrong back into the set too, their best song to date in our opinion, and it goes down an absolute storm with the rapt crowd, a real mix of gender and age, singing back the key line "I couldn't be more different if I tried" as if it's been written about them. It's the moment where you see them playing this to thousands with that simple line making a connection in a different way to each of them.

Rob and Jordan both venture out into the audience at points, bringing band and audience closer together. Even without that you sense there's a growing relationship between the two as they move past just playing to friends and family and attract a wider audience. Jordan's developed an ability to create a rapport with the crowd and the songs do their bidding for them too. Hopefully their relationship with DHP, who've taken them on for this show and have worked wonders for the likes of The Slow Readers Club and Cassia, will open some of those doors that they need to kick in to get to their rightful level.

Email ThisBlogThis!Share to TwitterShare to FacebookShare to Pinterest
Labels: Jekyll, Matter Of Mind, The Elephant Trees