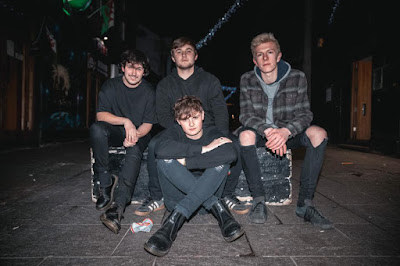 Matter Of Mind returned recently with a new single Sunken Revelations and on Friday they headline the Star And Garter in Manchester. We caught up with front man Jordan for a chat about their recent debut nationwide tour, the single and plans for the future.

In the last six months you've been out on your first ever national headline tour. How was it going out and playing in places you'd never been before?

It was ace! Touring is what we've always wanted and to be given the opportunity to do a small run with our name on the top of the posters was nuts! On top of that, having people come up to us and tell us that they love our music in places we've never been to was crazy. We were amazed that our music has spread like that and even more amazed that people actually showed up to the shows. We just can't wait to go out and do it again!

Did you get the reaction you expected and was there anywhere you particularly enjoyed playing?

It was better than we expected. We didn't expect to be playing to many people at all as we’re still, in the grand scheme of things, a fairly new band so to actually have people turn up to watch us let alone sing back lyrics to us and want to meet us after shows was insane.

Manchester is always a great show for us, as it is our 'hometown show', but I in particular was a bit taken a back by the show we played in Cardiff. What a killer show that was! Cardiff, we'll see ya again soon.

You've just released Sunken Revelations, a live favourite. How do you feel the reaction has been to the single?

It's still a strange feeling that that song has only just been released considering it's been in the pipeline for so long now. I think Ash and I wrote the riff for that song when we were 14, so yeah, a while back.

The reaction has been killer though! We've been getting some ace support from radio, which is a bit of a first from us. We've had radio plays here and there in the past, but to be played on BBC Wales by the legend Janice Long', then to have been played on BBC Manchester AND BBC Sheffield in the same night was a bit mental. Christian Carlisle from BBC Sheffield has played the song a couple times as well now. Mad.

Could you tell us a little about what it's about?

This song is a bit of a weird one when it comes to it's meaning. I think the lyrics can be interpreted in a few different ways - and I know that my view point on the meaning has changed a bit since writing it, which I think can happen with some songs. I love that though, music is subjective and lyrics are supposed to be connected with.

Having said that, the song is about that moment when you find out or hear a something that you weren't expecting or really wish that you didn't hear. That lump in your throat "Oh shit" moment when all you wanna do is lock yourself away or hide from everything for ever, but you can't do that. You've gotta keep your cool and stand there and not look like a muppet.

Do you find you're getting reactions to your songs now and people coming up to you and telling us what your songs mean to them?

I think we've definitely noticed that we have more people singing the lyrics back to us at shows and we've had more and more people messaging us on social media saying that they love our band and what we do which is an amazing feeling. We love speaking to fans of our band and hearing what the songs mean to them, and having people telling us that they've been blasting our tunes and showing all their mates. It gives us so much motivation to carry on what we're doing and makes us want to strive to be the best band we can possibly be.

You're at the Star And Garter on Friday night. Last time you were there you supported The Blinders. Are you excited to be headlining one of Manchester's most legendary venues?

Yeah that was a while back now - I think there was about five people in the room that night, including the sound guy and our mums. We still had fun and enjoyed the show though, so who's the real winner...

We can't fucking wait. We're so excited. It feels like we haven't played a show in ages, the last show we played was supporting Dilly Dally a few months back, which was ace. We just can't wait to get back up their, get sweaty and aggressive and to give the crowd the best seven quid they've ever spent.

Can we expect new songs in the set?

There's only one way to find out...

And do you have more written. With a couple of EPs and a growing list of singles under your belt, are you looking towards an album?

I reckon we're sat on way more than an albums worth of new material. We're constantly writing new music, it's just what we do. We've got quite a few songs in the pipeline which is completely different to anything we've done before as well - ranging from super heavy to almost electronica kinda stuff.

However, at this moment in time, we don't think releasing an album would be the best move for us yet. We want to hook in as many people as possible and then BAM, hit em in the face with a banger of an album when the times right.

What are your plans for the rest of 2019 and what goals have you set yourself as a band?

Our plans and goals for 2019 are to keep writing material, keep playing more and more shows, keep building our fanbase and to release more music... more more more.

We also want to work towards building a good team around us so we can truly focus on the music and the shows. We're still completely unsigned and unmanaged, which can be tough at times. Being in a band these days is so much more than just playing music, but we love it all.

Tickets for the Star And Garter show can be found here.