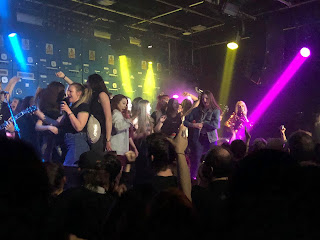 Anteros brought their Where We Land tour to Manchester Gorilla on Wednesday night with the intent to entertain and make a point and they succeeded wholly in doing both. Support came from Sheffield's RedFaces and Good Future, another band hopping off the 192 from Stockport to try their luck in the big city down the road.

Good Future open up proceedings with a chilled laid back set of songs that seek to charm you rather than blow you away. For a band that only played their first gig back in January and only two releases - debut Not In Love and most recent single Modern Romance - to their name - it's a good first impression that they leave with a batch of songs that are cut from the same cloth, one that's wistfully romantic in songs like Love You A Little Too Soon and Call It Off. 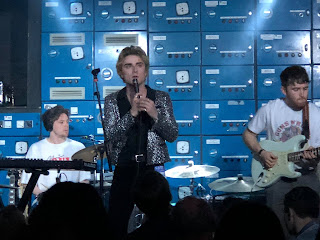 You sense the Stockport five-piece are still learning their craft, particularly the between-song chat, and feeling their way as a band, but to take on a venue of this size so early on is a brave move yet they don't look or sound out of place here and they get a warm reception.

RedFaces have made the short trip across the Pennines from Sheffield and very quickly get a response from the growing crowd. It's not difficult to tell why, their songs have an immediacy to them starting with one of their early singles Wise Up.  The middle of the set has a number of new songs though that suggest they've got a stack of potential singles ready to unleash on us. How To Say No, Naked and Waiting all possess that ability to hit you on first listen and have you knowing the chorus to sing along to before they've even finished your first listen. 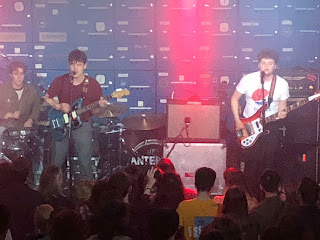 Front man Harry builds a good rapport with the audience as well as being an engaging performer who, like his band, put their all into their set and that infectious energy is contagious. They finish with two of their older singles - Messed Up Feeling and Take It Or Leave It - by which time they've already gathered a whole new set of followers. We wouldn't be surprised to see them back here in twelve months headline.

Anteros' rise has been quite phenomenal. Just over a year ago they were in Jimmy's, since then they've made it here via Soup Kitchen and are close to selling out Gorilla. Despite the speed of that rise, usually reserved for local heroes, Anteros don't look or sound out of place in here as they run through all eleven tracks from their debut album When We Land, plus three songs from their impressive early catalogue - On The Moon, Drunk and Bonnie.

Whilst Josh, Jackson and Harry's contribution to the sound shouldn't be underestimated, in Laura Hayden Anteros have one of the few band leaders around with genuine star quality. One minute playing the show woman in a metallic red dress that captures the impressive lighting set-up illuminating her, the next catching the eye of one of the devotees in the front row hanging on every word like they're telling their own life story and kneeling down and singing to their face. It's the sort of connection that means the world to the person on the receiving end. 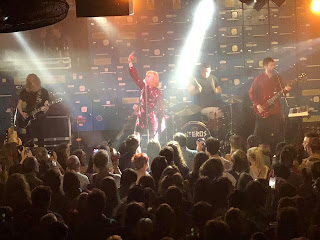 When she leans over to sing Drunk to one of the few boys on the front row, he's not sure how to take it, smiling embarrassed, whilst the girl he's with laughs uncontrollably. A couple of songs later for Bonnie, she invites any girl in the audience who wants to come on stage to join them in order to make the statement that women have every right to be on the stage as much as any man and that space should be safe. She makes sure she greets every single one of them that wants a connection either on climbing on or leaving the stage, telling the rest of us we might have to wait five minutes until they're done. No one minds. Add that into the Bonnie meet-ups before the show and it builds an impressive approach to smashing open the misogynist cliques and unwritten rules that keep the industry's walls and ceilings for women intact.

Anteros are an impressive live outfit, you see how much Jackson's time doing merch with Blossoms has taught them about how to approach this. The set's cleverly paced, building, changing shape and finishing with the bang of the trio of Breakfast, the dismissive Call Your Mother and their own self-titled anthem to complete the night with Laura out in the crowd. There's mosh pits and circles in the middle of the floor behind those engrossed and focused on the band with both doing their thing in splendid isolation from the other. Anteros are fun, they make music that has meaning and a message yet doesn't bore you rigid delivering it and they create a unique connection. There's no reason why they won't just keep growing and growing.

Anteros' official site can be found here and they are on Facebook and Twitter. Their tour concludes at Nottingham Bodega (April 19) and Leeds Key Club (20).