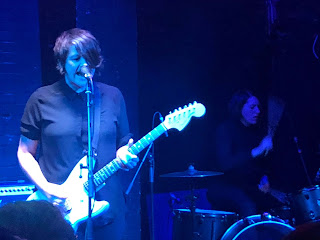 LIINES have been on the road with Sleaford Mods for a few weeks now and we caught up with them opening the night at Chester's Live Rooms venue on Thursday night. A breathless half-hour set saw them rattle through tracks from their debut Stop / Start album as well as play a number of new songs that show them moving forward as a band without losing the essence that makes them magic.

The Live Rooms is pretty much full by the time LIINES make it on to stage, an indication that they're playing to a knowledgeable audience who've either done their homework or who get down for the support band regardless. In opening track On And On, a new song that's got single potential written all over it, the chatter is almost immediately silenced and people listen, some dancing, to music that packs a real venomous punch to it through Leila's drumming, rhythmic, keeping everything in shape and order and dictating matters which allows Tamsin and Zoe to not have to overplay and instead provide the song, and those that follow, with a raw edge that's both sparse yet is powerful and on target.

The confidence that comes to playing to full rooms every night and winning over audiences is very evident, whether it be in the way Zoe and Tamsin stand facing each other with a subtle but knowing smile or the way the three of them actually don't need to look at each other for the rest of the night because they're operating in perfect unison.

The new material is bold and confident, able to shove the likes of Cold and Be Here out of the setlist. Sorry and Can't Get Over This don't hang around, both have lyrics that repeat throughout the song, but this has the impact of emphasis, hammering home the song's message with the bludgeoning power of the music providing demonstrable and forceful back-up. A glance around the crowd assures us that they're getting it too, either confirmation of what they knew or being enticed in and not wanting to leave. 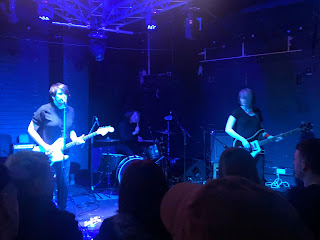 Some of the old stalwarts of course refuse to move. Find Something is played second and almost exhausts Zoe by the end, but that breathless energy that she exudes is contagious, part of the LIINES weaponry as they're visually giving everything. Disappear and Blackout have a harder edge to them, the product of being in the set for a couple of years and having the settings that cause a fire in the belly set to maximum. They finish, of course, with Never There, their debut single and still probably their finest moment, which is not to disparage what's gone before it, simply that it's one of the best songs to come out of Manchester this decade and will, once time has dispensed with the here today gone tomorrow fad bands, be recognised as such in years to come.

It's heartwarming to see LIINES starting to get the recognition they've deserved for many years now. There's no frills or fancies to them just straight forward no holds barred songs that aim for your jugular and don't let go. Powerful, direct, breaking down walls and barriers, they're part of the real beating heart of Manchester music and are taking hold across the country with this tour (and all credit to Sleaford Mods, who we miss because of train engineering works meaning we need to head off sharpish, for taking them out on tour for no other reason than a love of their music).

LIINES' official website can be found here.  They are also on Twitter, Facebook and Soundcloud. They support Sleaford Mods on a massive thirty-two date tour through the rest of April and May before headlining three shows of their own at London Thousand Island (May 30), Nottingham Bodega (31) and Manchester Yes (June 1).