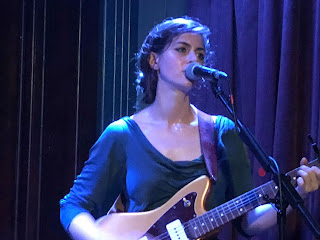 Vera Sola's European tour rolled into the sauna-like conditions of Manchester's Castle Hotel on Tuesday night for a dramatic set made up of tracks from last year's Shades album as well as a raft of new songs, supported by Elle Mary And The Bad Men.

This is for some reason the first time we've seen Elle Mary And The Bad Men, a name we recognise from countless posters yet who never happened to cross paths with on a bill they were performing on and we were at. The four-piece, with an added backing vocalist on Moment, take both songs from last year's Constant Unfailing Night album and new songs and paint them evocatively, one moment faint and almost not there, then the next either building to a crescendo or shifting in the blink of an eye. The songs themselves, one that's dedicated to "your ex" in particular, are crafted with care and attention to detail, the music following the mood of the story line, either reflective or hitting out at someone who's done her wrong. It's an impressive set that goes down well with an already filled room. 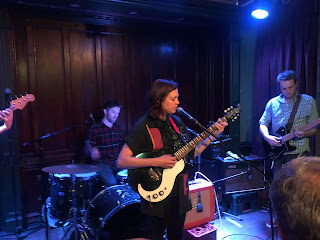 Vera Sola's debut album Shades was one of last year's most interesting releases, an album that required several listens to really get under its skin, revealing new qualities and dimensions with each listen and continues to do so. Putting some of the songs in the live context, alongside new material that makes the story even more engaging and exciting, feels like a unique experience for an attentive audience, who are dead silent when the music suddenly drops before moving off again in a tangential direction.

The set starts with an eerie double bass with soft drums lurking beneath the surface as the tension is built for Vera's arrival. For all the dramatic imagery of Shades and press photos accompanying the album, the intrigue tonight is more musical, in the way the double bass is used like a lead guitar at points and the player's dexterity with her fingers to coax sounds out of the instrument and a huge range of pedals is something special to observe whilst the drums are less prominent, but no less vital to creating the soundscapes across which Vera paints her stories. 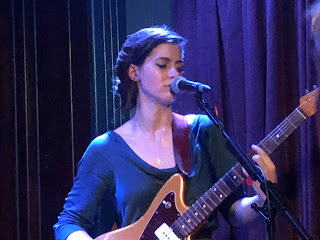 The themes come from life observations, whether they be her own or of people she's met. At times they look like she's undergoing a form of catharsis, songs about love abound and a sense of betrayal pervades some of them like Small Minds and Loving You, Loving from Shades and new songs Lying and the final two of the night Blood and the encore that wasn't an encore of Instrument Of War. It is very self-evident that these are songs that have been lived in and lived through.

Combined with a unique finger-picking guitar style whilst still living out the drama of the songs through her movements that see her crouch to the floor at times, she keeps the audience transfixed in the way only truly exceptional artists can. At moments we see visions of Kristin Hersh in the all-encompassing intensity of the performance, but with a very different musical style that touches most points between full-on Americana and old-fashioned rock and roll as we progress through the set.

She's engaging too, joking that she might be the first to expire with the heat in the venue that adds more discomfort to the unsettling nature of the songs and performance, laughing that we could say "we saw her last", plugging her latest release Crooked Houses with the fact it's free to download or you can pay "depending on the type of person you are" with a grin, and tells the stories of songs about other characters like Honey and Peaches, a bartender from her days working in radio who told her that she "lives and feels" the blues rather than listening to them before recounting the story of the as yet unreleased song. 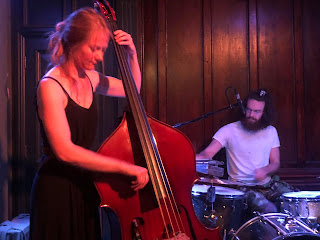 The unorthodox nature of her songs and performance really makes Vera Sola stand out. Tonight she has the audience hanging on every note, waiting for her to give the sign a song has completed its journey before bursting into applause, such is the way they have a life and path of their own that she dictates. Those songs are filled to the brim with so many ideas and descriptive language without ever feeling cluttered, every word and every note essential to the context of the songs demanding attention. With so many new songs showing an evolution in her sound, the future promises to be an intriguing one and if and when she comes back later in the year, her shows will go down as a must see.

Her UK tour concludes at London Lexington (April 24) before she heads to Europe and then back to the US on tour. Dates are here.