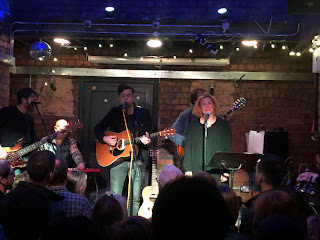 Dave Fidler launched his second album Songs From Aurora with a sold-out six-piece band set in the intimate surroundings of Salford's Eagle Inn, playing the album in full as well as a few favourites from his debut. Support came from a rare set by Joe McAdam and Camilla Sky.

Joe McAdam opens up proceedings with songs from his self-titled album that was released way back in 2010. As he explains he's more involved in the open mic scene now than playing regular gigs and releasing new material and that's a real loss as he's one of the most articulate songwriters around with an ability to craft songs that capture stories and moods perfectly as far back as the days of his major-label band Cherryfalls. He doesn't go that far back but the likes of Parkway Nights, Sweet Sister and Going To New York are very warmly received by a crowd that in the main stand and appreciate his art. 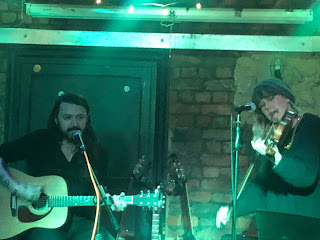 He's accompanied by New Jersey violinist Robin who adds light and shade to these songs, often threatening to steal the show from Joe. He jokes that they've only rehearsed once today, but with songs of such simplistic quality and the ability of the musicians that's no issue at all. They include a cover of Springsteen's Dancing In The Dark, a song they played together within three minutes of meeting at one of Joe's open mic nights and capture magnificently a different vibe to a song that's high on the list of those you really shouldn't cover. He utterly charms the audience too, offering to nip home and get some CDs if anyone wants one, and his six-song set feels way way too short.

Next up is Camilla Sky and the Norwegian songwriter tells us a couple of songs in that she's been having problems with her voice, but we would hardly have noticed had she not told us. An emotionally delicate vocalist, accentuating the words she's singing with the subtle tones of her voice, she also silences any chatterers. 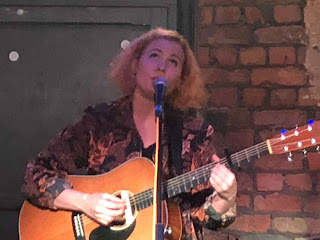 Her songs talk of the up and downs and uncertainties of relationships and the raconteur nature of them sees her explain what they're about before each one. Let Us Part talks of the breakdown and fallout, picking over the remains whilst Love Me, like its title, deals with the early days, willing and wanting something to work. She's humorous in those explanations too which adds to the bond she creates with her audience, somehow linking penultimate song Undertow with camel toe before introducing the final song Flow as without innuendo. It's the songs and her voice though that are the stars of the show.

Dave's assembled a six-piece band for tonight, with his brother Andy on drums, Camilla on backing vocals, Horse on lead guitar, Ray on bass and Alan on keyboards. What they do is take Songs From Aurora and flesh the songs out still further, the rockier numbers are cranked up loud and the more personal intimate moments feel even more so, especially as many of those that they're written about are in the room. There's also a real chemistry up on stage, even more so when one of Dave's relatives Adam joins them for For You which was a song he co-wrote with Dave on the month-long road trip in his caravan Aurora that created two-thirds of the album and gave the record its title. It's an interaction between them that feels genuine and helps to fuel the songs despite the lack of rehearsal time they've had together.

Like Joe earlier what really stands out is the songwriting craft in this varied set of songs that have hints of country, rockabilly, blues and full on rock and roll mixed together yet somehow still feel cohesive. There's complex tracks like Sum Of Days that sees Camilla take on lead vocals for part of it and a blues stomp in the main set's final song Will I Ever Learn yet more simple plaintive numbers like Home yet the set feels cleverly structured to allow all sides to the album to have their moment to be appreciated. What the heavier more complex numbers reveal as well is the breadth and depth to Dave's voice that isn't necessarily immediately or even apparent when he plays the songs solo acoustic. When he has to fight to complete it comes into its own. 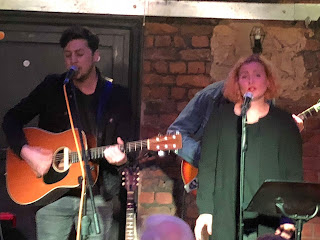 The intimate personal feeling of the night is heightened by Dave's storytelling between songs. Heart Of Stone is explained as meeting an innocent woman who'd been in a Haitian prison for five years the day before her release was granted and Let Her Go is introduced as one of Andy's songs that Dave stole to which he laughs that it's the best one on the record. It's that unassuming nature Dave has despite his extensive talent that makes crowds warm to him. When he talks about Eternal Road being about his mum and the strength she's shown bringing up a family of seven before pointing her out, he's deflecting attention away from himself as he does when Adam joins them and he says he's now with musicians of a completely different calibre.

Dave Fidler shouldn't have to feel in awe in the presence of any other musician though. He creates connections with audiences that don't know him and he deepens them with those that do through the way he delivers them. Whether it be his usual acoustic sets or this full band performance which breathes new life into the four songs from I'm Not Here, the effect is the same. Whether it's intended or not, the encore has two songs about his two children - A Song For Nico and Easy Gone Easy Come - and that underlines without any words being spoken that he writes about the things that matter to him as a husband, father, son or friend. And by default he writes about things that matter to any human being with a heart and soul.