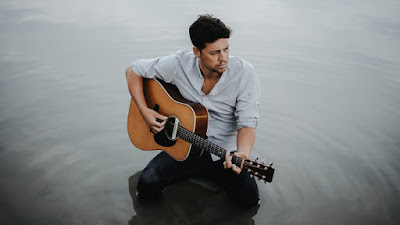 Dave Fidler is preparing to release his second solo album Songs From Aurora on April 5th. We caught up with him for a chat about the unusual methods employed in the writing of the record, the fuller sound compared to his debut I'm Not Here and his exciting plans for taking the record out on the road.

Your forthcoming album is called Songs From Aurora. Where does the name of the record come from?

In August I embarked on a tour of the UK in my caravan, Aurora. It was then I wrote and posted a song a day for the thirty one days of August. Most of the album is made up of those songs so it was only right to name the album after my trusty caravan.

It’s got some very striking artwork. Could you tell us a little more about the artist and how it relates to the music on the album?

The artwork is by an artist called Mia Hague who I’ve been a fan of for years. Both the album name and artwork paint a picture of something ethereal and magical. I think because the album was written when I was meeting new people and having new experiences on tour it all feels like a blur now I look back on it - like I wasn’t even a part of it or something. It seems like it wrote itself or was there for me to find.

Your last album I’m Not Here was recorded on reel to reel and had a very sparse sound compared to Songs From Aurora. Was it always the plan to make a record with a fuller sound?

Yes I always wanted to do more with the production on this second album but was also conscious to focus on having acoustic guitar or piano as the lead instrument on almost all of the songs so they wouldn't sound out of place when I play them solo.

And who did you record the album with - is it you playing everything or did you bring others into the process?

I recorded and produced the album myself at The Fuse Studio in Manchester. I took it to Alan Lowles at Airtight Studios to be mixed. It was mastered by Geoff Pesche at Abbey Road.

Most of the album is made up of me and my brother Andy on drums. I had a bunch of friends and family feature throughout the album too which include Adrian Gautrey, Alan Lowles, Camilla Sky, Adam Shardlow, Rob Fidler, Becky Fidler, Lisa Fasipe, Adam Smikle and Jenni James.

Last August you recorded a song a day on you tube, many of which made this album. What was the idea behind you doing that and was it the intention to use that to actually write a large chunk of the album?

I was inspired to do a song a day off the back of reading a book called Big Magic which talks about creativity being a living thing that surrounds us and the importance of turning up each day and tune into it. When I started the song a day I was convinced that I had writers block. Turns out I just needed the focus of a challenge like that to find my way again as a songwriter.

Could you tell us a bit about the new single Skylark and the star of the video?

The Song was written as part of my song a day challenge in August with a good friend of mine Charles Morgan. I wanted to shoot the video with my daughter Nico on Werneth Low as I spent half my childhood up there. It’s a great place to look out at the rest of the world. My brother Andy animated all of the skylarks that you see throughout the video.

There were a lot of songs around after I’m Not Here - Go To Sleep and Love Listens for example - that didn’t make it onto the record. Are those songs gone for good or did they just not fit on this record?

No they're still around. I didn’t feel like they fit on this record due to the nature in which it was created. I’ve recorded Go To Sleep twice in the past and the plan is to release a version of it on a solo record in the future. Love Listens was written by an old friend of mine Matt Hooper and I’m determined to record it one of these days.

You are a prolific songwriter. How do you go about choosing which ones to progress to recording and releasing?

I asked everyone who followed the songwriting journey to vote on the album selection. I recorded seventeen songs for a twelve song album and asked some close friends to listen and help filter it down to the final twelve. I focused mainly on the flow of the album and staying true to my identity as a solo artist.

You’ve also been working with John Bramwell on his forthcoming Full Harmonic Convergence record and touring that. How has that influenced the way you write and record?

I’m delighted to be working on the new material with him and touring as part of the band. John has been a champion of my music since we first met and he’s a constant source of inspiration when it comes to writing and performing. He’s been a sounding board for ideas and that’s really valuable when you’re in the process of creating a new album.

To support the album you’re out on your first headline national tour. Is it exciting to go out for the first time with your name on top of the bill and are there any places you’re particularly looking forward to going?

Yeah it’s going to be a blast. I’m excited to be playing the Rum & Crab Shack in Cornwall! My launch on 5th April is at The Eagle Inn in Salford which is a venue that I love but have never played. They’re all intimate venues that I’ve chosen to showcase this new material. I’ll be taking a band on the road and we’ll be joined by Chris Hillman in London at the Betsey Trotwood as a guest guitarist.

What are your plans following the album release?

I have a ten-date USA tour in May/June in affiliation with Sofar Sounds and also have a bunch of festivals coming up this summer. All to be announced soon on my website.

If you had to summarise Songs From Aurora in a sentence, your one line sales pitch to someone who doesn’t know you, how would you?

It’s my finest work to date but I can’t remember writing it.