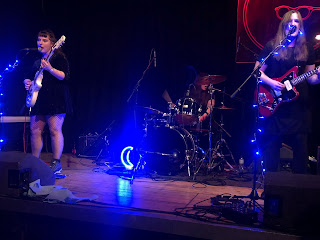 Lunar Sounds played their debut Manchester show at Band On The Wall as part of their regular Free Vibez night with an eight-song set featuring all four tracks their recent self-titled EP and four new songs.

There's something different about Lunar Sounds that's difficult to put your finger on. Perhaps it's a combination of the way Chesca, Anna and Caris exchange lead vocals and instruments throughout their eight-song set, the way they make playing rock music with a message seem like a load of fun rather than dour and serious or simply the natural chemistry that they have with each other that means they feed off each other's energy.

For the first half of the set Chesca and Caris share lead vocals with Anna behind the drums, before they ditch the drums for the closest they have to a ballad, Timebomb from their self-titled debut EP. At the end Anna's on guitar and takes over lead vocals on one song and Caris is behind the drums.

By this time they've already won over the other bands' audiences with the sheer joy they have in performing, whether it be when they get everyone to come forward, join in clapping to a song most have never heard or Chesca bounding around the stage with a huge grin across her face on an unreleased song that takes aim at the patriarchy and the expectation on women to conform. 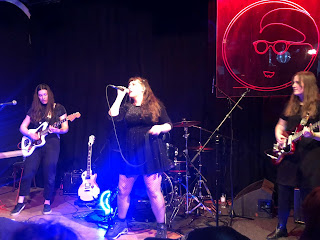 Half way through she kicks over a pint accidentally that she'd placed there about a minute before to no one's surprise other than her own and she looks like a mischievous child at the end as she apologises. There's a few rock and roll moments along the way such as Chesca and Caris bouncing together as they play Out The Dark and Anna and Chesca crouch and lean backwards as they finish final song The Getaway with an old-school pose as the drums crash in to bring the set to an end.

That humour and joy they exude might make you forget that they've got a great set of varied songs going on at the same time. The swapping of instruments has little impact on their ability to deliver songs that have a refreshing looseness to them and an ability to hook you in and not let go yet still assuring you they're in complete control of what they're playing. With such an impressive and varied debut EP, the four other songs in the set suggest that even though they're a new band there's plenty more to come.

Lunar Sounds are exactly what the music scene needs right now. They've got a message to deliver and aren't going to go away quietly, but they make the whole thing fun without compromising what they have to say. They promise it won't be their last Manchester show, the sooner they come back the better.

Their EP can be bought from here - and read our review of it here.