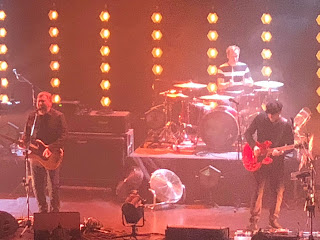 Doves marked their long-awaited return with their first show at Warrington Parr Hall, a warm-up for Friday's Teenage Cancer benefit show at London's Royal Albert Hall. Tickets sold out in minutes as people scrambled to catch one of Manchester's best-loved and often underrated bands return. And return they did in style.

It's nine years since Doves last played together amidst a fog of acrimony. Clearly time has been a healer, and although they're not all hugs and smiles, the chemistry that they have when they start to play together has clearly returned as they run through a career-spanning sixteen songs that touches all of their four albums and most of their best-known songs.

Before they enter Parr Hall at nine o'clock to a buzzing room fueled by the bars around Palmyra Square and further afield to a deafening roar, they have a David Lynch quote on the screen behind them - "Give yourself permission to express yourself as freely and completely as possible, have faith that this is a worthy endeavour and believe that you can do it." It feels appropriate given the love in the room that confirms that Doves returning simply isn't a band coming back to line their pockets and disappear like a band that had their own return in this very room. Tonight and the summer might be about reminding people who they are and what they're about, but the little press they've done suggests new material and taking themselves forward is the driver behind why they're coming back.

Rather than start with one of their big songs they open with the instrumental Firesuite from their debut album Lost Souls. It's almost a marker being laid down as well as a tease, but as it segues into Snowden and the mosh pit erupts down in the stalls, there's a wave of euphoria that carries both band and audience through the night even making the slightly clunky sound in the hall an irrelevance. 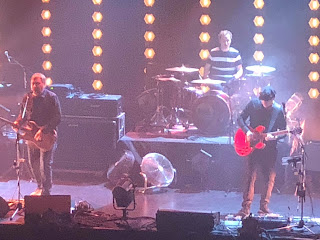 They don't say much, but there again they never have. Jimi issues a cursory "hello" here, "it's been a long time hasn't it" there, compares Jez buzzing off being back on a big stage to Megadeth and demands we jump like we're listening to House Of Pain before they kick into Pounding. As they ad-lib the opening to There Goes The Fear at the end of the night and it doesn't quite work, he laughs that they're making it up as they go along.

What the night does remind us of is how many great songs they had, spread across all four albums. And whilst the likes of Winter Hill, 10:03 and Kingdom Of Rust off the album the latter gave its name to might not hold the iconic status of The Cedar Room and Pounding in the eyes of the wider public, they do in this room amongst fifteen hundred friends. There's points where the audience take the end of the song and sing it back to the band after they've stopped playing, such as on Last Broadcast and the four of them simply stand there and drink it in, realising exactly what they've been missing and how much they've been missed.

Tonight Doves rolled back the years, took us to a happy place and a happier time. They reminded that music needs its jagged edges, its rough diamonds, its unpolished jewels in the crown of a scene that doesn't conform, doesn't play to the standard rules of engagement and yet still succeeds. They don't look like they've suddenly become best friends again, but that edge gave their music a frisson that escaped many of the contemporaries in any case. As There Goes The Fear concludes in a cacophony of percussion alone lit up by demonic strobes then stops dead as the roars of appreciation envelop the room, we wonder collectively just how we've coped without them for the best part of a decade.