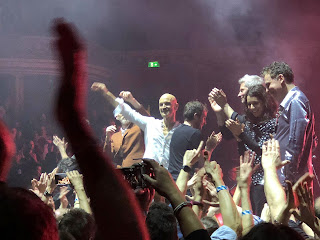 James’ Living In Extraordinary Times tour headed to the capital on Saturday night and the salubrious surroundings of the Royal Albert Hall. Following on from previous nights they opened for themselves with an acoustic set of rarely played tracks followed by a new album heavy electric set.

It’s just Jim, Tim and Saul right at the front of the stage for opening track Just Like Fred Astaire, the whole arena listening intently or mouthing along the words to this crowd favourite that feels even more intense when stripped of its big Millionaires production especially when Tim and Saul share one microphone for the “come dance the water’s rising, just like Fred Astaire” call and response towards the end of the song. “This is a bit cobbled together” Tim laughs as he works out whether they stay at the front for Hello as other band members join them. It feels nothing of the sort as Saul’s violin adds the fluorishes to Mark’s simple plaintive piano.

There’s an amusing moment where Tim’s lyric cues aren’t in place for Backwards Glances, a song they’ve only played live twice and which only featured on the deluxe version of Living In Extraordinary Times, and Chloe tries to share hers but Tim can’t read font 12 as he’s “blind as well as memory deficient.” He says they’ll play Coming Home instead which gets a huge roar which he says is down to people thinking it’s Come Home. The way it’s sung back though, particular the echo on “i’ll be coming home” says the opposite though.

You can hear a pin drop as you would hope when they’re playing such personal songs. When they eventually do play Backwards Glances and Adrian, Andy and Chloe’s vocals give the song a huge lift that fills this massive space. Destiny Calling does get a huge roar of appreciation once it’s recognised by the crowd and stripped back it feels reinvigorated and fresh on the 21st anniversary of its release as a single.

Pressure’s On is a much-requested return to the set, the Wah Wah track (although it’s one of the three non-jam tracks as it dates back to 1991) possesses the requisite emotional intensity as it builds to its climax. They finish with one that Tim tells us “I don’t always get through this one” as All I’m Saying is about the death of a close friend and Tim dedicates it to anyone who didn’t get to say goodbye to someone. You can hear it’s still raw as it feels like it could break down at any point, but they make it through to finish off a triumphant first set. 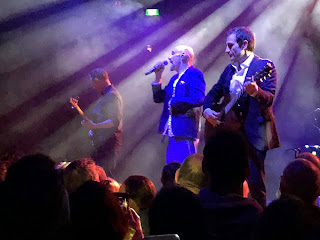 “How were the support? I heard they were shit, I can’t stand over emotional singers” Tim tells once the conquering heroes return to stage. They set their stall out immediately with two of the more ambitious journey songs from Living In Extraordinary Times - the seven minute sprawling masterpiece that completes the standard version of the album What’s It All About and the almost title track’s sonically expansive expressions - which show how well these new songs have connected. While we’d argue we think James recorded work 2008-19 is superior to that of the same time period between 1990 and 2001, it feels like Living In Extraordinary Times is the one record where the songs have connected in the same way consistently and completely on the live stage.

Waltzing Along (and later Say Something) may get huge roars of recognition, you sense the band have to push themselves right to the limits to give these songs the same adrenaline rush as their belligerent younger cousins. Picture Of This Place confirms that thought, Tim right on the edge of the stage channeling his energy outwards and being met by a huge wave coming back at him, particularly where the song stops dead and then explodes back into glorious life before Andy joins him for the “root toot toot toot” ending. Even those around us who’d said they knew little of the new record lose themselves in it. Moving Car, another refugee from the album’s deluxe version, which Tim tells us should have really been a double, slows things down a notch, but the power is replaced by a wandering intensity that skips from section to section.

Say Something sees Tim make the first of three forays out into the crowd, heading into the stalls seats to find connections with the crowd. It gets those that haven’t been swept along by the energy of the Extraordinary Times material moving and on their feet too. Five-O follows and, like in Bath, it feels like it’s been reinvigorated, its DNA spliced with that of the new material, each point where it lifts and soars going a little higher than before.

Heads and Stutter feel like two peas from the same pod, conceived thirty six years apart and which lay bare any notion that people have of James being a safe greatest hits band. We know they’re not of course but some still harbour that delusion. Brutally metallic in their destructive intent using strobes and drums as assault weapons, they threaten to lay the walls and ceiling of this ornate building to waste such is the force with which they are delivered. 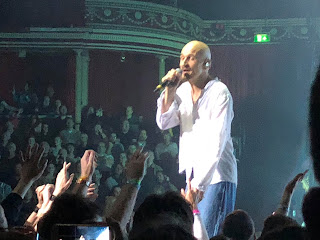 They soothe our battered bruised bodies and ears with a gorgeous How Hard The Day, again using backing vocals to heighten the claustrophobic intensity of the song. Leviathan is gloriously executed and feels like, swearing excepted, it could have been one of their biggest ever songs had it been released in a different time and place. As it stops dead, Tim lands on the front rows and is carried backwards, almost dropped at one point where camera phones were more valued than human cargo, whilst singing the song’s final choruses.

He’s back out amongst us again, balancing precariously on the rail separating the stalls from the arena floor before jumping off into the seats and picking people to dance with. Laid follows and feels revitalised after a short rest from the set, the momentum of the set driving it forward. Ever ones to not abide by the rules though, they finish the main set with Attention, which broods, spits and bubbles its way to a stunning climax.

There’s no way of course anyone is going anywhere. Saul rails against the ritual taking away two minutes that they could have been playing music. Tim dedicates Moving On to those who’ve lost people hoping that death was more a beautiful experience like his mum’s than a painful one. He almost has to stop after the first line but his bandmates notice and repeat a few bars to allow him to regain composure with him and Jim sharing an embrace that speaks volumes for the way band relations appear to be at an all-time high, something which undoubtedly fuels their rich vein of creativity and challenging themselves and their audience.

Many Faces has been tasked with the unenviable task of replacing the Sometimes singalong, which has in our view rightfully been given a time out, and the sound of three and a half thousand voices repeating the song’s all-in-it-together refrain feels particularly heartening in these extraordinary times where our leaders and their acolytes live in increasingly depressing echo chambers. Saul sums it up for many of us when he takes the opportunity to declare “fuck Brexit”. There is only one human race and we all belong here. 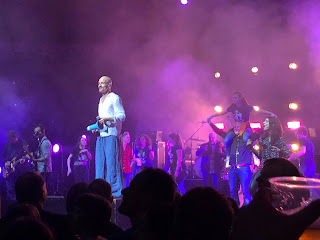 They finish on Sound and as if to emphasize that point Tim selects people from the front rows to join them on stage plus a few others who elude security’s grasp. They dance, a gentleman has a young girl on his shoulders and no one gets their phone out, they just dance and dance as Sound follows its long winding semi-improvised path to the end of the night. You sense James would play all night, but as we hit the curfew there is no more.

Tonight’s set was a little less adventurous than previous nights, as is often the case with big London weekend shows where expectations are raised and the media / record label are there to be impressed. This tour’s sets so far though mean the big guns brought back are part of the thrill of the revolving setlists we’re being treated to. As the band take their well-deserved bows, the roar of the audience from the arena floor to the heights of gallery standing tells you everything.