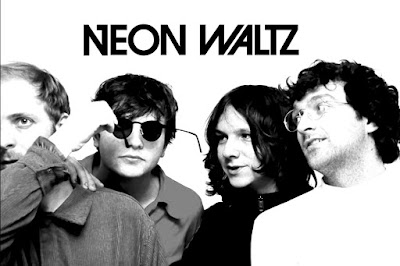 Returning with a new single Friends Who Lost Control, Neon Waltz's second single since their debut album Strange Hymns, and in the middle of a huge UK tour, 2019 might be the year that the John O'Groats band finally see deserved rewards for their infectious and anthemic songs. We caught up with front man Jordan for a chat.

You're in the middle of a big tour that calls in Manchester on the 24th. Is this tour to preview new material or is it more a farewell to Strange Hymns?

A bit of both to be honest. We’ll be releasing quite a lot of new music this year so will be slipping some in the set. We also realise that people who come to see us want to hear the music that they’ve heard already. Most of which is the album.

Do you think Strange Hymns (and the Bring Me To Light EP that followed it) ended up being a bit of a slow burner and took longer to do its work and build your audience than albums normally do?

It’s the case for most bands. Take The National for example. Massive now but they didn’t just blew up right at the start. We’re in this for the long haul. We’re not Catfish and The Bottlemen or have any intention to be apart of that scene of bands that are breaking, but feel we will be heard by a huge audience at some point because we know we write great songs.

You released Stranger Things just before Christmas. Could you tell us a little about what the song is about - and what sort of reaction you got to it?

Its about prioritising what you want to do over what people may expect you to do. We gravitate to that line of thinking in a few songs. Must have something to do with where we’re from.
The reaction was great, people really seem to love us playing that tune live. The video surprised people too I think, and showed the piss taking side of the band.

And you have a new single out now called Friends Who Lost Control?

It’s a song about life without any sort of balance. And the downfalls that come from choosing an abnormal career path. It’s pretty relentless from start to finish. We recorded it in Liverpool with Tarek Musa, which was great. He has such a good ear and worked wonders on the track.


Are you still based up in John O'Groats and is that still causing practical issues in terms of recording and touring?

Yes. I don’t remember it ever really causing any issues with touring or recording. Just means we have a few hours extra travel to and from most of the places we play or record. We’re well used to that now so it doesn’t cause us any issues.

You finished Strange Hymns back at the end of 2016. How much new material have you written since then that you have ready to play, record or release?

Quite a lot. We’ve steadily just kept writing since the album came out, and never really had any sort of cooling off or a break from it so we have loads of new tunes that people are yet to hear. They will soon enough though I think.

And has your songwriting process changed much since Strange Hymns?

Not really. We still go through the same process of: someone has the bare bones of a song, and then it comes together in the practice room. Personally I’ve started writing songs more on the piano than I did in he last few years so that changes the way you write a song.

When will some of the new material see the light of day?