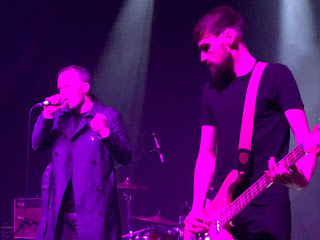 The Slow Readers Club made a triumphant return to Liverpool to play to a sold-out months in advance Arts Club on Friday night. With a set touching on all parts of their back catalogue, they held the audience in their grasp for seventy minutes without ever letting go.

There is one not-so-secret ingredient to the success of The Slow Readers Club. They might not be in the first flushes of youth, strike Insta poses and wear flowery shirts in the videos as some kind of alternative for writing songs that matter to people and have longevity or play many of the games that seem to be the norm these days, but what they do is connect with their audience in a way few bands can. That's why there's a healthy contingent of men and women down the front who go and see them more than one night, sing every song at the top of the voice and join in the ubiquitous Readers chants that echo round this gorgeous room at the end of each and every one.  They write songs that talk about the emotional turmoil of being an adult, of real life worries and concerns and people relate to them because they've lived through the same things.

The set is full on. The absence of slower songs like Don't Mind, Distant Memory and Days Like This Will Break Your Heart mean that the accelerator pedal is very much pressed firmly to the floor as they blast their way through sixteen songs, no encore, that leave you feeling battered and bruised yet exhilarated by the end of it. The sweaty bodies that emerge from the mosh pit at the end tell their own story. 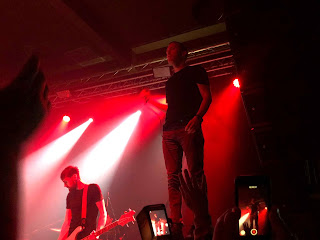 There is a continuity that runs through their work - from Sirens and Feet On Fire from the eight-year old debut through to tracks from last year's top twenty Build A Tower and new song The Wait - of songs that plunge the depths of human emotions yet somehow end up being a catharsis, an escape rather than wallowing in the mess. As you look at the contorted face of the person next to you who is living every word, you see that this music, those words mean everything to those people rather than the disposable three minute banger that catches your attention on first listen on the latest tastemaker Spotify playlist then gets replaced by the next one never to be revisited again.

You sense the confidence that is running through the band's performances these days too. The way in which Jim never stops grinning throughout the show, lost in the music, Aaron struts the stage, coming forward, climbing onto the speaker stack during You Opened Up My Heart to survey the heaving mass below him. By the time they reach the end of the set and the crowd have taken that riff from On The TV off them and made it their own, they've delighted their hardcore faithful and won over a whole load of curious observers if the deafening READERS chant is anything to go by.

The Slow Readers Club might not be the coolest band around, given they're not in the first flushes of youth, but when have the bands that really mattered, and last, been cool?  Their journey proves that the underdog can still make themselves heard, that the good guys do sometimes win, but above all that music that makes connections, that talks to people, is the music that matters the most. However old you are.