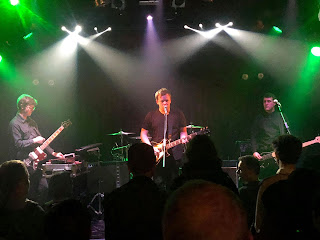 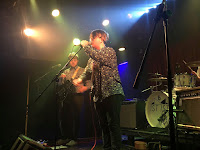 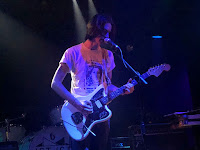 Ist Ist opened their nationwide Everything Is Different Now tour with a busy show at The Lending Room in Leeds supported by Bakelite and Roaches. Showcasing songs from their two EPs and giving us a tantalising glance into their future with a new song, they both delighted older fans and converted new ones with one of their strongest performances to date.

Bakelite opens up proceedings; a one-man project that takes live guitar and a bank of machinery and creates a lo-fi experimental sound. Nikolai is however beset by technical and mechanical problems, a guitar strap coming loose and sending his guitar crashing on to other kit and then another machine refusing to work and requiring the old on/off trick and a bit of under the breath cursing. When everything works, the likes of recent double A single The Opening / Heart and a song about John (Lennon, we think) get a good reception from the crowd as the combination of man and machine flow well together. 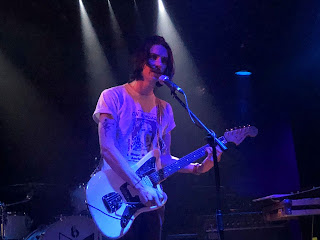 Next up are Roaches, a young band with only one demo release to their name that clearly mean business, with an impressive confidence and stage presence with the songs to back it up. They introduce themselves at the end of the first song by means of a poem that paints a dark picture of the world before declaring “we are Roaches.” What particularly impresses us about them is the way they use three vocals at times to make these songs stand out from other angry young bands with the fire in their bellies. 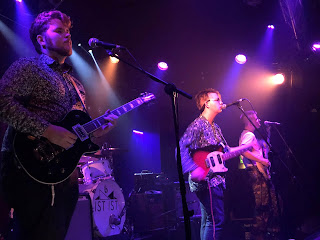 Miss Dopamine, Ligature and Reno are the stand out tracks in a set that avoids the usual pitfall of new bands starting out of having a couple of stand out tracks surrounded by songs that will fall by the wayside. They maintain the high standard throughout and keep the audience, including a healthy contingent of their own, engaged and into them. 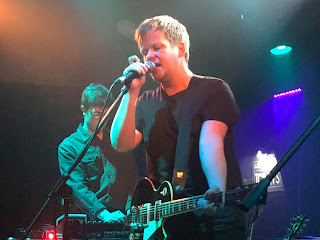 That Ist Ist can attract a sizeable crowd to an out of town gig on a week night is testament to their growing reach as last time they were in Leeds they played to about five people in a pub window rather than the hundred or so that are here and glued attentively to the stage.

The Lending Room is a great venue, ideal for the 2019 version of Ist Ist as the set up allows for all the subtleties in their sound to be heard in the intricate delicacy of I Want To Disappear and Undignified and for separation when they ramp things up on Jennifer’s Lips, Exist, Emily and new song, and possibly their best yet, Black. Whether it be Andy’s bass solo that announces Son Is The Father, the atmospherics that Mat adds to Preacher’s Warning or guitar as Strangers builds to its final glorious chorus, Joel’s drumming that provides the raw power or nuance as required or the real expression of raw personal emotions that you can hear in Adam’s voice, the balance for the band is perfect. 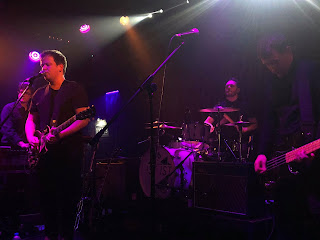 Their set takes in all the tracks from their Spinning Rooms and Everything Is Different Now as well as early singles Strangers and Silence plus the aforementioned Black, an impressive collection that puts to bed the insulting lie that they’re simply rehashing iconic bands of the past that simpletons throw at them. The devil is in the detail of these songs, in that subtlety that we mentioned and in Adam’s words that reveal dark thoughts and experiences in the way only a select few lyricists can do and still connect. And connect they do as you look around the room to see people eyes closed mouthing the words back as if they were their own. That’s not to say they can’t knock down walls and be accessible and radio-friendly too - Emily, Exist, Silence, Strangers and Black do that - but there’s something deeper and more lasting here than a chain of three minute identikit songs aimed at playlists and hit counts. That’s evidenced perfectly in Diversion which closes the set, a bi-polar song of many parts that broods then explodes into life and then drops right back down at the end. It somehow manages to feel both clinically executed but at the same time right on the edge of collapse under its own weight.

It’s a triumphant opening night proper of the tour not just in terms of Ist Ist’s performance but in the reaction they get. With healthy sales for the other out of town shows it feels like their hard work, rather than the excess promotion that lesser bands seem to get, and excited word of mouth might yet still dividends. Stronger, more intense, yet at the same time opening themselves up more to their audience, they might just yet achieve more than the hallowed reverence of those in on their secret.