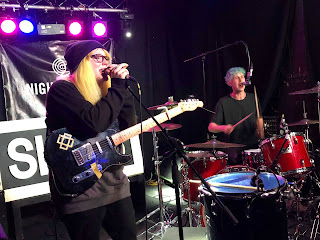 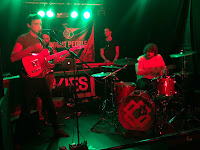 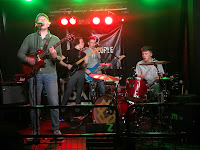 SKIES closed their X tour on Saturday night at Night People in Manchester, the Kent duo playing a thrilling set to a busy crowd supported by Stockport's Red Bricks and Nantwich's Bluelights, who both performed deservedly well-received sets.

Red Bricks open up proceedings with an impressive set. Starting with recent single Rosé and Lemonade it’s clear they’re a band with something about them, big uplifting songs with choruses that’ll stick in your head and manage the rare trick of not sounding like they’re trying to be someone else. Joel’s voice is powerful, confident and helps convey a richness and depth to the songs, particularly when they’re lifted by Dan’s backing vocals. 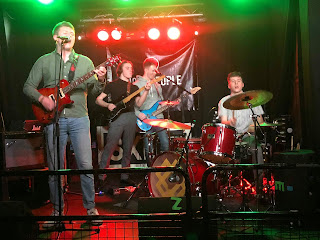 Songs like Sister, She’s A Poison and the wonderful and wonderfully named title track of their forthcoming EP Sea Breeze and Bumble Bees suggest that they’ve got plenty of ammunition ready for their onslaught in 2019 which already has a headline show at The Deaf Institute in April in the works. The nods of approval from around the room from those listening to them for the first time tells its own story - that Red Bricks are definitely a band to keep an eye on.

Bluelights, one word Dan tells us, are an assured bunch with very much anthemic tendencies to their sound and performance. They encourage the audience to get involved and they respond. Early single When You Were Mine has a repetitive chorus line that quickly becomes an earworm and has people hearing it for the first time singing along. White Noise is less immediate, but no less imposing. 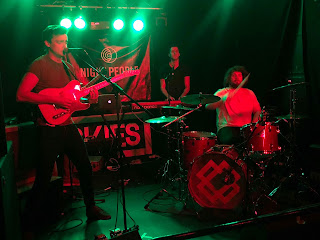 They’ve been around a couple of years now and that very much comes across in how tight they sound, particular the combination of Jonathan’s bass and Adam’s powerful drumming that give the songs the rigid foundation on which they layer Sam’s keyboards and give Dan license to play the front man role and convey their ambition to write songs to fill rooms bigger than

There's so much joy to be had in watching SKIES play; their infectious, voracious energy that they put into their forty-five minute performance is magical. The combination of Alie's guitars, Jericho's drumming and their electronic wizardry that helps them is an intoxicating one that powers songs like Afterwards, Green and X and makes you wonder why they're not filling festival tents across the land and inciting people to lose themselves in the beautiful chaos that they create. Whether it be Alie standing tall on a box, smashing a solitary drum at the front of the stage or falling to her knees or whether it be Jericho's arms that move so fast you can hardly keep track of them whilst somehow still adding vocals to the mix, you simply cannot take your eyes off them. 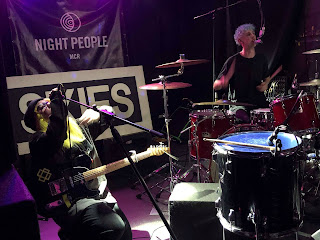 For a band with just two people and the restrictions that can place on the sound there's a genuine variety to their set too. Hold On swerves between anthemic and head rush whilst their cover of Enter Shakiri's Live Outside is at least the equal of the original and like everything they do they draw their own unique mark all over it.

SKIES are a breath of fresh air at present, they sell themselves by not selling themselves, but by being themselves. They're not trying to win any cool points or make some big political statements with their music, but they want us to have fun and they do that by having fun themselves, throwing themselves into the performance with everything they have and that gets them the response they deserve from an impressively sized Manchester crowd for a band over two hundred miles from home with no label or managmeent support.