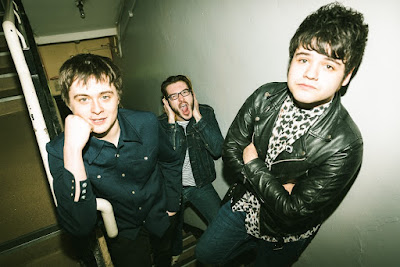 Touts recently released Before We Go Forward, a cover of a long-lost Joe Strummer song. We caught up with them as they embark on a big UK and Ireland tour including a show at the Night And Day in Manchester on the 29th March to talk about their songwriting ethos, plans for an album and the Brexit elephant in the room.

Before we start, could you introduce Touts to our readers please?

Touts are three boys from Derry who think they’re funny, enjoy a pint here and there smoke amberleaf and then play tunes when they can fit in.

Your first release of 2019 is Before We Go Forward, a cover of a little-known Joe Strummer track.  What inspired you to choose that particular song?

We got a message about a year and a half ago asking if we wanted to cover it. This was before it was even out so we were amongst the first to hear it which we took as a  privilege. When someone hands you a lost Strummer tune it’s not wise to turn it town. We recorded it about a year ago and just had it waiting ever since. We were told about a month ago we could release and now here we are.

You wear your hearts on your sleeve with the music you write, whilst a lot of bands sanitise their songs and don’t address the political and social issues of the day. Do you think it’s still important for music to have a message and an impact rather than being simply entertainment or a soundtrack to something else?

It’s a tough one. Ultimately I suppose each to their own. Some people do just enjoy music as a form of entertainment. But I think I speak for a lot of people who would call themselves “music heads” in saying it’s much more than that.

And I don’t mean in the sense that it has to be a bulletin board for political issues. It’s important that songs at the very least mean something to you. For us it dictates more or less everything we do. Even down to our often questionable dress sense. It’s never a case of sitting down and saying “right let’s write a political song”. We write about what gets our blood going which is often political and social issues.

But as of late we’ve been writing songs about other things that make us tick equally but in a different way. As a writer it’s important not to lie to yourself in terms of “manufacturing” a song. You can but I can’t imagining it being the same. The reason we give so much to our live performances is because we’re reliving the songs every night, they mean something to us and by keeping the lyrics somewhat ambiguous people can take whatever they want from it. Even in the political songs if you listen to the lyrics there is a lot more in there than what you would assume.

Do you think that approach has disadvantaged you in some ways?

As I mentioned above it’s not an approach, we have a song called “Go Fuck Yourself”, we probably have more songs that aren’t about politics than are about politics. I suppose some people pigeon hole us a political band. But that’s just the way we are as people.

We have plans for what the first album, second album and so on are going to be like. Our influences go much further than punk and politics. Then again someone needs to take the mantle and talk about real important issues. There are only a small number of bands that actually do it without being watery.

Like it’s so easy to say “fuck trump blah blah blah” but there’s so much more that should be talked about than cheaply exclaiming “fuck this and fuck that”. The bands influences stretch far further than punk and politics. The music I listen to most is The Rolling Stones and Simon and Garfunkel. As I say the band's not set on being this or that we just do whatever we want so I don’t know only time will tell what direction we go.

The current political situation with the coalition government and the Brexit farce has particular implications for you coming from Derry. How has it changed the city and the outlook of young people like yourselves?

It’s not changed the city that much. There has been a few bombs and bombscares that apparently aren’t connected to brexit but the general public doesn’t think that. It’s making everyone more politically aware. And thus realising how fucked up politics is. In Derry the border with the Republic of Ireland is about a fifteen minute journey maximum in every direction. Our bassist for example lives in Muff which is less than ten minutes from our practice room. Does Brexit mean he’s going to be searched and have to show a passport everytime we practice? The answer is nobody knows.

It’s nine days away from when the UK is meant to be leaving. The north of Ireland was not considered at all in our minds when it was put forward. Now it presents such a huge unthought of problem that it’s on the tips of everyone’s tongue. I was sixteen when the vote happened so I couldn’t vote and now look at me at eighteen having to chat about something I had absolutely no say in. I’m really fucked off talking and hearing about it. I think everyone is.

You’ve been pretty prolific to date with three EPs in a couple of years.  Is there more to come and can we expect a Touts album on the horizon?

Aye, we’re big boys now so no more EPs for a while the next big thing will be our album.

And you’re out on tour this month for a couple of weeks. Can we expect old material or will your set focus on new material?

Since it’s our headline tour we have a longer set, and we’ve wrote a lot of new material for the album so there will be plenty of new stuff, but there’ll be plenty of songs people will have heard before

If you had to describe Touts to someone who hadn’t heard you before, where would you start?

Come see us or listen to our tunes that’s where you’ll find what we’re about. People can take us or leave us it doesn’t bother us.

Email ThisBlogThis!Share to TwitterShare to FacebookShare to Pinterest
Labels: Touts