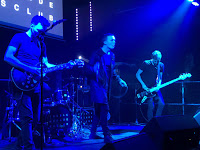 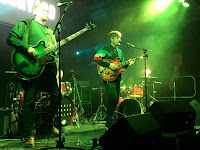 The second night of The Slow Readers Club's mammoth UK tour saw them play to a packed room at a snow-bound Brickyard in Carlisle. A career-spanning set covering all three albums also included a new song called The Wait from their recent demo sessions. Support came from Liverpool's The Tea Street Band.

The Tea Street Band are labelmates of The Slow Readers Club at Modern Sky and similarly have taken their time to get recognised. They both formed out of much-loved bands that for some reason never made the breakthrough their potential suggested. Last year's Frequency album was four years in the making from their self-titled debut, but seemed to make their star start to rise again.  Tonight they're a "man down" as keyboard player James is absent so they play as a three-piece, but still get a warm enthusiastic welcome from the Readers crowd, and that's primarily down to the fact that, like the headliners, they have an intrinsic understanding of the fundamentals of how a great tune can appeal to people and even without their keyboard player who contributes a lot to their sound, the songs stand on their own two feet in the new arrangements. 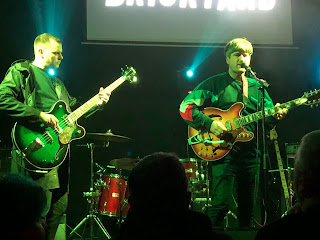 Whether it be Disco Lights from the debut or the likes of Sacre-Coeur or Only Love from Frequency, there's a warmth to them that it's difficult not to fall for. Unassuming in their approach, focused on the music rather than show, they let those songs do their talking for them. They finish with Feel It, one of Frequency's singles, a warm summery shimmering track which effortlessly recalls all sorts of lush romantic connotations.

It's intriguing to see The Slow Readers Club back in venues of this size after the success of last year which culminated in their huge sold-out Manchester Apollo show. Any worries that this might feel like a comedown are quickly dispensed with as they open with Fool For Your Philosophy and whilst the scale of the light show and the booming sound of the big shows might not be replicated, the intensity and sense of occasion is still there. Every show feels like an affirmation that their success is simply correcting a historic wrong dating back to their Omerta days. The proof of this is in the way the songs from their debut - Feet On Fire, Lost Boys and Block Out The Sun - have blossomed, as Aaron alludes to, into difficult to move objects in the set. Its follow-up Cavalcade has even heavier representation and with at least six new ideas laid down (and one of them, The Wait, being debuted on the tour) for Build A Tower's follow-up, the issue they're going to have is which songs to leave out.

They seem keen to mix things up though. Distant Memory, in our view one of their best three songs, makes a welcome return and shows off a harder edge to their sound, the last minute and a half of chaos a far cry from the more melodic moments of singles like Plant The Seed, I Saw A Ghost, You Opened Up My Heart and Lunatic which all receive rapturous receptions and huge singalongs. Aaron jokes that they don't play Here In The Hollow very often because it's a hard one for him to sing, but it's another highlight of the set full of them. 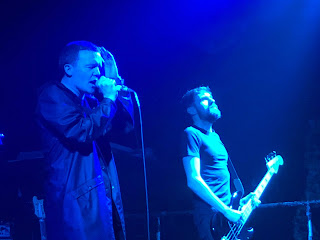 They shrug off technical issues with Jim's bass, which they lose completely at one point, and which trouble him later in the set. Whereas in the past it might have fazed them, they simply laugh it off, particularly when Aaron tells us the next song is Start Again and realises the irony of what he's just said. Tonight Jim's bass seems to be up in the mix, almost playing a solo in the introduction to Forever In Your Debt. It's minor details but it feels like going full-time has allowed the time to make subtle adjustments to how they play some of these old favourites.

New song The Wait already feels like an old favourite yet still a progression in their sound. Whilst not quite as immediately accessible as the likes of You Opened Up My Heart, it very much demonstrates that their creative fires haven't been dimmed by success and the increased focus they now have by being a full-time band. The crowd adore it of course, some even mouthing parts of it even though they only debuted it the night before. One of the more spectacular aspects of the Readers' ascent is the relationship they've got with their fans, and as they conclude with On The TV, Kurtis has to stop playing to laugh as the song's hook is sung back to them so loud that they can't hear themselves. As it concludes, the audience take it back from them and force them to add an instrumental refrain before they're allowed to leave the stage.

This tour is about spreading the word further, taking the band to places they've never previously been able to play so the audience is a real mix of the hardcore and new fans, but by the end they're almost indistinguishable such is the connection between floor and stage that these songs generate. This tour very much feels like a step back before moving back forward and further. If there's pressure on them to succeed with that, it hasn't impacted their performances.

The Slow Readers Club played Fool For Your Philosophy, Supernatural, Start Again, Forever In Your Debt, Here In The Hollow, Never Said I Was The Only One, Distant Memory, You Opened Up My Heart, Plant The Seed, The Wait, Lost Boys, Block Out The Sun, Lunatic, Feet On Fire, I Saw A Ghost and On The TV.