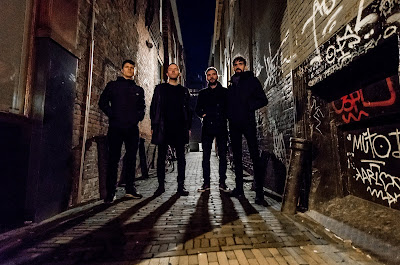 As they embark on a forty-seven date tour of the UK and Europe we caught up with Aaron, Kurtis, Jim and David of The Slow Readers Club ahead of the second night of the tour at Carlisle Brickyard to talk about the difference going full-time has made to them, the new material they've started to write for their fourth album, planning setlists and the challenges and excitement of playing towns and cities that they've never visited before.

You’ve just started a tour, the first one when you’ve not been working full time. How’s it changed the band - not having to do the day job and then the band stuff in the evening?

Jim - I think we feel more prepared, whether it be for recording or for gigs. Before we’ve always done it in the evening and always wished we had more time for it because we were so limited to what time we could spent. Now we have the time to prepare properly, spend more timing writing and that time is during the day.

David - You’re more mentally prepared for it at that time.

Aaron - That’s certainly the biggest thing because on the last album and Cavalcade, we’d go into the studio with the ideas still in embryonic form with the basics of the song and in the most cases no lyrics at all. It was an exciting way of working and I liked the idea of putting something down as close to conception as possible.

So you don’t get tired of it by the time you release it?

Aaron - Exactly. We spend a lot more time on getting parts down and people will notice the change. That’s not to say what we’ve done before isn’t perfectly fine, but for us in terms of process I think we’ll be happier with what’s committed to record.

That’s time isn’t it? You can go over something again, you’re not constrained by saying you’ve got two days to finish a song.

Aaron - We have a reasonable process with it as well. We might have a single coming up possibly, but we haven’t been working to a particular deadline. Our process is that we jam something out, the bones of an idea, melodically and parts wise and that’ll go to a What’s App group and then we’ll live with it for a few days and then decide which ones are coming through and they bubble up and ended up as finished tunes. We’re dead pleased with what we’ve got so far.

How much time are you spending doing band stuff now? Is it five days a week?

David - We’ve been getting in the studio three days a week for four hours at a time. That’s practice and writing. That was January, but there’s still all the other band things to do too. Planning the tour, messing around with merch and all the business side of it, we’re doing that as well still.

Jim - We did the gig out in Holland too, which we wouldn’t have been able to do before as it was midweek in Europe.

David - The BBC Quay Session in Glasgow too. So we still have lots of things going on and we’ve been working on the beer too. We wouldn’t have been able to do that before.

Aaron - We’re tour managing ourselves too so we’ve been doing things like booking accommodation, the social media, advertising; it’s a business as much as it’s a band if you know what I mean.

You’re going out on this tour which is the biggest one you’ve done by a long shot to places you’ve never been before and playing smaller venues. After the big gigs of last year at the Apollo and the others, it’s stripping it back to 300-700 capacity venues. Does that feel more exciting in some ways?

Kurtis - Yes I think so. When you look back at those big shows last year, you put a lot of pressure on yourself. Those gigs like the tiny one we did at Hebden Bridge was one of the best we’ve ever done.

Jim - Last night was like that too. And Stoke at the end of the May tour last year, one of the smallest we did.

Kurtis - We also don’t know what we’re going to get when we get there, so it’s a surprise sometimes.

Do you think it will be a bit strange when you play a gig that’s not sold out now given the ones did at the end of last year?

Aaron - We’re not going to be playing to empty rooms. And there were some last year like Cardiff that were half full so we’re used to it a little bit.

David - It can look weird, but you just have to go with it.

Aaron - You have to try and impress the people who are in the room though so they’ll tell their mates so that next time you go there it’s fuller.

David - We’ve been very fortunate in the way we’ve been able to sell out venues of late.

You’re sussing out where you’ve got an audience too, I guess, as you’ve not been even close to places like Inverness, Aberdeen, Exeter and Truro so far?

Aaron - We’ll see. This is about getting out to the places where we’ve seen other bands who’ve been full time getting out to over the years and we’ve been envious of them. In the future when we do the big shows, hopefully those people will want to come too.

Kurtis - The important thing is playing a good gig.

Aaron - When we were in Omertà and in the early days of The Slow Readers Club, we went out on tour and played to no one and we’re not doing that. Even a gig with a hundred people in the room, we’d be happy with that given what we’ve done in the past.

And you’re going to Europe too. Is that through the label or something you’ve done yourself and is there anywhere you’re particularly excited about going to?

Aaron - There’s some really cool places on there. Amsterdam obviously as that’s sold out and people are going to party. Germany is one place where we’ve already been making inroads so tickets are moving faster there.  We’ve not announced supports yet either. We think there’s a market out there for us everywhere.

Does that include the States as well?

Aaron - We got a bit of radio play on KEXP in Seattle and we’ve had some people approach us from New York PR companies and booking agents, but it’s about when it’s practical too. This European tour won’t be as financially lucrative as doing the UK, but we’re trying to build for the future. It’s a real ambition for us to get out to America actually. We might go out to China again too as our label Modern Sky are owned by them and have a whole infrastructure there for us to go and do festivals.

In terms of new material, you played a new song The Wait last night. How far down the line are you with writing album four?

Jim - We’ve got some solid ideas.

David - We’ve got about half an album if we looked at it. Songs, not finished articles, and plenty of ideas. They do turn around quite quickly though. Obviously we’ve had to down that a little bit with the tour, but in the summer festival season we’ll be able to go back in again during the week and rehearse and work on new material again. It shouldn’t be too long before we have an album’s worth of material.

Do the new songs sound different?

Aaron - There’s certainly one or two. I like to think what we’ve done before is quite varied and we obviously want to continue that. The one we played last night (The Wait) is faster than anything else in the set and a bit harder, but I don’t think we’ll been unrecognisable. There’s one, and I don’t like to draw comparisons, that’s a bit more Vampire Weekend in direction, a bit summery-sound which is unusual for us. It’s not nice jangly pop though like The 1975.

David - It’s not experimental for the sake of being experimental. When you’re in there for four hours you’re not looking for the easiest thing and you’re more relaxed and work on an idea for longer. I think, musician wise, we’re improving too before we’re doing it more.

Is this tour the end of Build A Tower and then it’s into a new era?

Kurtis - We were discussing this yesterday, how weird it will be when we’ve got another album’s worth of songs and we do a lengthy tour, we’re going to have to ditch more songs.

Aaron - This time we’re going to try and bring in some that we didn’t normally play at the last gigs.

Your setlists are quite varied. You’re not just playing Build A Tower, you’re playing as much off Cavalcade and parts of the debut album too.

Aaron - And when we have a fourth album and we have to move some of the old favourites, that’s when it’ll get weird.

David - The next big tour is likely to be related to some sort of album release, but if we’re charging more at that point maybe we’ll just play longer. I don’t think our fans would be unhappy if we played more, if twenty songs was the norm.

Aaron - I was making the point yesterday that established bands couldn’t just play the best of and there’d be lots of songs that I’d want to hear that I didn’t. But as a band we’d want to play the new album. We’d have to try and satisfy as many people as we could.

It helps keep it fresh too for you, changing it around, when you’re playing as many dates as you are.

Aaron - One of the difficulties we have is if we play something off the first album, I don’t really have a sense of what people would want to hear from that other than the standards we have in at present. We’ll keep on moving things around though.