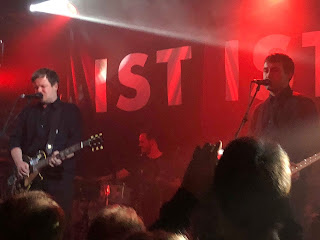 Ist Ist returned to Gorilla for the biggest headline date of their Everything Is Different Now tour. Supported by the impressive Red Light Effect, they played an hour's set of tracks from the EP, its predecessor Spinning Rooms, some early singles and a new track called Black to a rapt audience drawn in by the four-piece's power and intensity.

Red Light Effect are a band that wears its heart on its sleeve. They trade in a big ambitious reaching sound yet the intense nature of the performance leaves you a little unsettled. This is a good thing. Dale's vocals fill every corner of this railway arch like a booming preacher with a message to impart, aided by a set of buttons attached to his microphone stand to give maximum effect, but it's his bandmates - two Ians on guitar and bass and Alice on drums - that create that big sonic platform for him. 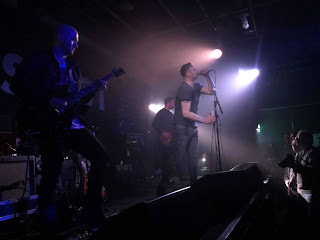 Songs like Phosphorous and Cherish are prime examples of what they trade in. Last year's single Empress is the stand out track, although the standard never really drops once they've dispensed with that as their opening song. They deservedly get a great response from a crowd that understands what they're trying to achieve.

It’s clear from the offset tonight that Ist Ist mean business. Four hundred and fifty people are packed into a dark hot Gorilla witness a band that’s out on a limb deliver a set of precision and power. Eighteen months on from their last show here, the sheer adrenaline rush of likes of Things Will Never Be The Same Again, Rats and Seven have been consigned to legend and replaced by something that has made Ist Ist’s ascent feel like it’s gathering momentum despite the ignorance of the self-appointed tastemakers of the city’s music scene.

There’s an argument that the best bands make their name through word of mouth and that’s exactly what it feels like is happening here. Adam acknowledges towards the end that people have travelled from afar to this gig and that tells its own story. Tonight’s crowd is a mix of long-time fans and curious new followers yet the minute the opening bars of Preacher’s Warning strike up they’re as one in being sucked in towards Ist Ist such is the power emanating from the stage.

What’s different with the Ist Ist of 2019 is the way they’ve learnt to control and channel their power and anger. You can hear the emotions bleeding out of Adam’s vocals, thanks in part to the best sound we’ve ever experienced in Gorilla, the raw stripped to the bone baring everything words to Son Is The Father, Emily and I’m Not Here setting hairs on end as it feels like we’re witnessing a cathartic experience. Like most of the very best music, Ist Ist tell you that it’s ok to be not ok and you’re not alone in your darker thoughts. 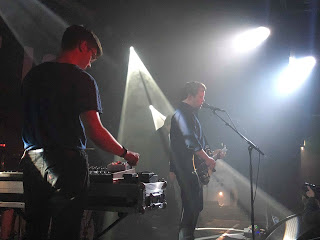 And people sing along to them. Adam acknowledges just how special that is at one point. It strips right away the preconception that somehow Ist Ist are “difficult”, which they are if your definition of difficult is actually having their own steadfast vision of what their band is about, a robust set of principles and a confidence that there is an audience there for what they have to say. Growing crowds around the country with only the band’s own promotion behind them suggest that they’re on the right track.

The tracks from their recent Everything Is Different Now show that they’re pushing the boundaries of what they do. Exist and Jennifer’s Lips are the type of driving bruising song that would be lauded as saving guitar music if it came from a group of skinny trousered New Yorkers whilst I Want To Disappear and Undignified are so achingly bleak and desperate yet utterly compelling. They also demonstrate how Ist Ist have grasped that sometimes less is more, allowing us to hear Andy’s bass, Joel’s drums and crucially Mat’s magic tricks from his banks of keys and pedals.

There’s space to go back to their early days. Night’s Arm, which Adam tells us was the first song they ever wrote, Strangers, Silence and Right Before Your Eyes have had to grow to retain their place alongside their more recent work. Strangers, in particular, is so swaggering and belligerent in its intent that you feel it lift the audience. But when they play a new song Black and Adam sings “I can’t make the seas part for you, there’s nothing I’d rather do” over a beautiful uplifting bassline you suspect many of them may be gone by the time of their next tour.

As they finish the set with Diversion and Adam lets loose one final blood curdling scream, Ist Ist leave the stage in triumph. Constantly evolving, opening themselves up to their audience without compromising, making those who insist on comparing them with that band look more stupid with every passing show and with an ever-growing canon of work the size of a band with a couple of albums under their belt, it feels like the momentum behind them is starting to snowball and people simply won’t be able to ignore them any more.