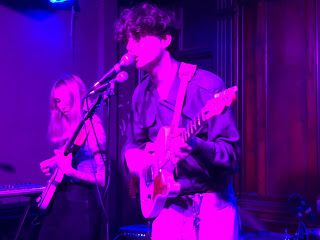 There's a real buzz about Working Men's Club, a word of mouth excitement that feels different to the usual hype that gets thrown around a new band that comes anywhere near threatening the mould of which bands out of Manchester are usually cast from. We caught up with their latest support slot at The Castle Hotel and watched them cast their spell over a packed room.

We don't ever recall The Castle being quite so packed for a support band and there being quite a sense of anticipation as they take to the stage. What Working Men's Club do so well is push the boundaries of what you'd expect from a four-piece band, there's plenty of touch points to many of the most celebrated bands of the past but they're simply that as if they've built their own identity by throwing their record collections up in the air and piecing them together from where they land.

There's moments where you look at Syd and he's lost in his own world, as if the music has transported him out of his body. It reminds us of some of those iconic Ian Curtis live photos where you see a body and a performer as two separate identities, separated by the music. It's disconcerting, but also exactly the impact of music should be, to take you out of your body and to a different place. 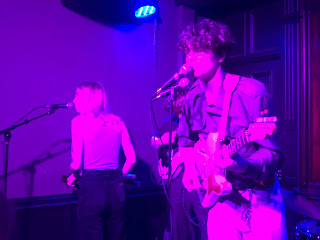 Those expecting them simply to give us half an hour of variations on their 6 Music playlisted debut single Bad Blood are going to be disappointed because the rest of Working Men Club's set is more fluid and loose whilst retaining the concise urgency of the song that's drawn so many in towards them. Syd and Guiliana swap vocal leads, they swap instruments, Jake's unique visual and aural drumming style opens up many possibilities and later in the set they ditch the drums for a drum machine and crank up the guitars a notch further.

They do all this and with each song the connection with the audience grows deeper as their myriad sprawling yet still fragile sound is rolled out in front of us. As the set comes to an end, they're implored to simply kick back in and improvise the refrain to the final song. A guy near us tells his friend they could have continued that all night and everyone would have stayed to listen to where they took it. He's spot on, there's something about Working Men's Club that hooks you in and doesn't let you go. They're the most important young band in town right now and it's only a matter of time before they're packing out their own headline shows in places much bigger than this.