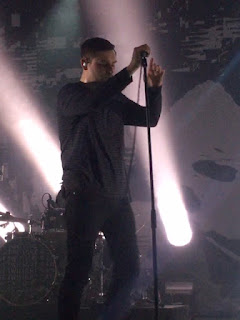 Following on from the release of their critically acclaimed album It Won/t Be Like This All The Time The Twilight Sad finished a 4 date run of sold-out gigs in 5 days by playing a triumphant gig at their spiritual home, the legendary Glasgow Barrowlands, leaving a 2,100 strong capacity crowd mesmerised and ensuring there wasn’t a dry eye in the house. Jason Wynne was front and centre to take it all in.

Glasgow – the city that rains more than Manchester – is expectant for the band that have just had a number one album in their own country and a number 17 album in the UK charts. As the clouds open and the deluge becomes relentless there’s a different atmosphere to any other Twilight Sad gig I’ve attended before. Everyone is up for this like never before. The miserable weather and the miserable band go hand in hand – yet it’s not dampening the spirits but fanning the flames and firing up an audience that has travelled from all over the world into an uncontrollable and complete frenzy. The Barrowlands holds a special place in the band's heart and James Graham had previously commented that his grandad had been involved with the organisation of the laying of the springy dancefloor adding extra meaning to what this place means to him.

The band walk out to rapturous applause. The noise is deafening and you can’t hear yourself think. Lead singer James Graham is visibly moved by what he’s seeing and hearing yet there’s something comforting for him knowing we’ve got his back just as he has ours.

[10 Good Reasons for Modern Drugs] sets the tone for the show. It’s cranked up another level to combat the partisan crowd and from the first note there’s bodies bouncing along in unison as James, singing in a slightly lower octave to usual, exclaims “We’re hanging on by a thread”. The reasons for the slight variance in voice only coming to light later as James has been suffering with a poorly throat after 3 successively brutal nights at Glasgow King Tuts, Manchester Gorilla and Camden Electric Ballroom. “Why can’t you remember me?” he concludes. We do, we will, always. We’ve seen it all before, we’ll see it again.

With barely time to catch breath they launch into a quartet of songs that blend into each other perfectly - Last January, VTr, The Arbor and Reflection of the Television. Last January is frenetic as both James and the crowd lose themselves in the music, arms aloft, demonic, eyes wide shut, jolting and shaking to the music. Andy MacFarlane’s Fender Jaguar guitar, like a dagger through your blackened heart, scythes you down. “This isn’t you that I came here for, this isn’t you that I waited for” although on a night like tonight, at the Barras, you think the exact opposite.

VTr will be remembered in years to come in the same breath as Joy Division’s “Love Will Tear Us Apart” is. We’ve been waiting for the band to deliver this anthemic song for a beaten, downtrodden generation. MacFarlane and Johnny Docherty go head to head – lead versus bass – counteracted by Brendan Smith’s poignant synth and those brutal drums of Sebastien Schultz. “There’s no love too small” is sung from the bottom of James’ very heavy heart as a banner with the very same words is unfurled right before the bands eyes. Something they thought they’d never experience but such is the momentum they have right now that surprises are aplenty. There’s a wry smile before the reality of the song takes over. “I won’t be surprised if it kills us all” screams James.

Only three songs in and The Arbor offers respite with the ambling, sublime bassline of Docherty meandering and navigating, taking us on a journey of twists and turns. It’s a slow burner but it pulls you in all directions as the synth of Smith lets out a painful cry that gets more intense as the song progresses culminating in the Scottish Morrissey – MacMorrissey himself - finally asking “why did you leave in the night?”

Reflection of the Television, taken from the album Forget the Night Ahead (something we’re never going to do), is the perfect answer to The Arbor. James, “more than a fighter, you know”, rolls back his eyes, battles through the cacophony of noise from the band and audience, as well as a painful throat, to deliver an almost impossibly brilliant version of the song. This is what makes the band special. To pour out your heart and soul every night with such emotive language requires strength of character and despite the tears rolling down the cheeks and the apparent fragile state of mind this is James at his best – standing proud of what he and his band have achieved together and on their own personal levels.

The fact Auge/Maschine with its haunting “I can’t believe you hit me and it’ll never show” and Sunday Day13 with the now immortal words “It won’t be like this all the time” survive the strains are testament to a man possessed and determined that the biggest night of this bands life is not going to suffer.

In Sebastien Schultz the band have found a phenomenal drummer who is fast becoming a band favourite with his precision drumming fast becoming the heartbeat of the quintet, dictating the pace, keeping everyone alive and the way he hammers down at the drums on the start of There’s A Girl in The Corner is incendiary as the crowd unleash a deafening roar. What you get with The Twilight Sad are songs that connect deeply with their congregation and with James bearing mind, body and soul on every track it’s hard to not get lost in the emotion of it all – “you’re not coming back, you’re not coming back from this.” 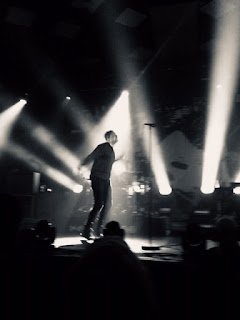 While the band have progressed in terms of size of venue on each of the four nights the feeling of claustrophobia and intensity has heightened when encountered with the bigger challenge. This is something only special bands can do and right now they are at a moment which suggests the world could be their oyster. With that in mind I’m Not Here [missing face] is delivered with ferocity from Andy McFarlane’s Jaguar Defender. “You’re too close for comfort” is sung as passionately by the frenzied crowd as James himself. You listen to the words, you relate, this is a band not scared to approach the demons we all have – “Why do you do this to yourself?”

For a band that has suffered the lowest of lows and the highest of highs Let/s Get Lost is the perfect emotional rollercoaster of a song to meet head on. There’s no avoiding this juggernaut as it careers towards you with flashing lights - “I’m losing, losing you every day” to “But I’m still yours”. The pain of Let/s Get Lost doesn’t ease with Videograms. The self-doubt, insecurities and fragile state of mind come to the fore as this band goes where many bands fear to go. “So don’t start, don’t you start on me” bellow the audience as James asks “Is it still me that you love?” For me the most emotional vocal of the night.

Crowd favourites Cold Days From The Birdhouse and The Wrong Car deliver a left-right combination that floor you and ask you if there’s any way to get off the canvas. Cold Days is introduced with James telling us he didn’t particularly enjoy people singing this song back to him but now he needs us more than ever, not just because of tonight’s sufferings but because he really does need us all to be together, taking good care of ourselves and each other. This is definitely an “I was there” moment as James looks shocked, emotional and incredulous as we sing our hearts out and carry each other singing those words “and your red sky at night won’t follow me, it won’t follow me now.” The Wrong Car is delivered with its usual ferocity although it’s now tinged with more emotion after some explanation to the meaning of the song. James is manic, almost deranged, gesticulating, fighting back the tears, pushing the boundaries of his inner-self.

Like a boxer beating the count, the crowd drag themselves off their knees and rise to their feet but you know the knockout blow is seconds away as Frightened Rabbit's Keep Yourself Warm is delivered with beauty and grace before the brutality and ferocity of the lyrics takes us down again. James looks up to the heavens and you just know that the late, great, Scott Hutchison is looking down on his good friend saying “you’re doing me proud” and he did just that with this heartwarming tribute. This cathartic moment brings everyone together and people deal with it in various ways – some hug, others close their eyes, there’s crying, smiling, screaming, bouncing, standing open-mouthed in awe of it all – most importantly everyone is in this together but dealing with it in their own way too. It’s okay to not be okay and in that moment in time you know it registers.

And She Would Darken The Memory concludes a night never to be forgotten at the iconic Barrowlands. We know “the rabbit won’t die” and as the band pull together for one final push you just know they’re tighter and closer than ever. It seems almost unfair as they put the boot in one last time when we’re already grounded but when a band gives everything you give everything back. It’s a two-way thing and as James slumps to the ground one last time you know the ride is over for now. James tells us “you have made a massive difference to our lives” as he leaves the stage tentatively, almost as if he wants to stay there forever and survey the magnitude of what just happened.

Finally getting the full respect and recognition they deserve we appreciate it won’t be like this all the time for the band. It’s a triumph against the odds and their wings will not be clipped. You can’t help but think they are moving on to even bigger and better things in the very near future but for now a sold-out Barrowlands crowd step out onto the wet, miserable streets of Glasgow, arm-in-arm, hailing the most important band in the world right now.

The Twilight Sad played [10 Good Reasons for Modern Drugs], Last January, VTr, The Arbor, Reflection of the Television, Auge/Maschine, Sunday Day13, There’s A Girl in The Corner, I’m Not Here [missing face], Let/s Get Lost, Videograms, Cold Days From The Birdhouse, The Wrong Car Keep Yourself Warm and And She Would Darken The Memory.