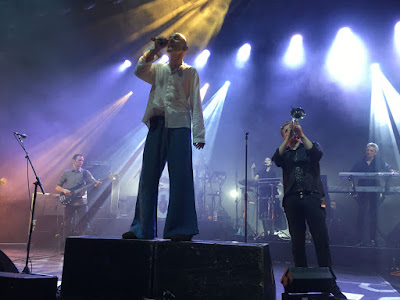 James' Living In Extraordinary Times tour made its way to Cambridge on Monday night. With the clever idea of supporting themselves with an acoustic set, James fans got two for the price of one, albeit two very different sides to the band. Dan Starr went along for an emotional evening laced with surprises from the band's extensive back catalogue and some modern day James classics.

You could hear a pin drop. Well actually just the quiet hum of the air conditioners in the background and 1,700 people catching their breath. I’ve never been to a James gig that has stunned the audience in to silence. This was it.

Being their own acoustic support band on this tour is pure genius. It gives the band breathing space to sneak up on you, reach into your heart and grab your soul.

The acoustic set opened with Pressure’s On, which starts to permeate the spine right from the first chord, setting the audience unconsciously swaying. It hasn’t been performed for 25 years before this tour, so it’s a real treat for fans. The knack that James has of raiding their lockbox of 340 songs to polish up a gem or two every tour is one of the things that fans adore about the band.

The stripped back versions of Hello, Coming Home (Pt2) and Broken By The Hurt make the lyrics all the more accessible and touch a nerve with the audience. I looked around me and people were surreptitiously wiping their eyes.

Changing tempo Just Like Fred Astaire lifts the crowd. They’ve been playing the unplugged version of this for a year now whilst promoting Living In Extraordinary Times. It sounds fresh and crisp, and is particularly suited to the acoustic form. 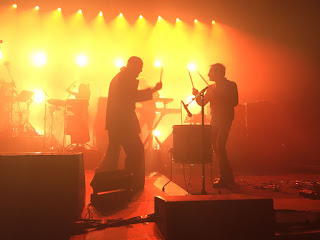 For the final two songs of the acoustic set the band dip into La Petite Mort territory, which has themes of life and loss. All I’m Saying is about the death of one of frontman Tim Booth’s dear friends. Before starting Tim says he may not make it through. In many, many James gigs I’ve never seen him breakdown and unable to finish a line. He did tonight. He said having his wife at the gig made it even more emotional. Clearly the stripped back acoustic set allows him to reach deep inside.

In these moments of public but personal soul searching it’s great to see how tight and connected the band members are these days. There is lots of eye contact and support as they adapt to allow Tim to recompose. The final line of “See you next time” leaves the audience raw and stunned as the band leave the stage. It was a jaw dropping set.

After the techs and roadies reconfigure the stage for the electric set, James is back to show they mean business. The opener Hank states their intent. It struggles mid-set because it is such a punch in the face – up front is the right place for it. They roll right through What’s It All About and Heads. This trio from the latest album are a masterclass in live musicianship. These aren’t light or frothy pop songs with made-for-airplay hooks. They have crammed lyrics, soaring trumpets and keys, pounding drums and rabid guitars; they are dense, multi-layered jack-in-the-boxes that spring out in a live setting to grab the audience by the throat, revealing a little more every time.

Old fan favourites return for the mid-set, with Getting Away With It (All Messed Up), Tomorrow, and Five-0. Unusually, in what Tim frames as a Brexit vote, he stops to give the audience the choice to pick the next song between Stutter and Sit Down. In what feels like a 52%/48% vote, the audience pick Sit Down.

During Moving Car Tim stops to admonish a gig security person for coming between the audience and himself to hand out water at the barrier. It’s pretty light hearted and leads to some good banter with the audience. It is clear the band is very relaxed and feels at home on the road. 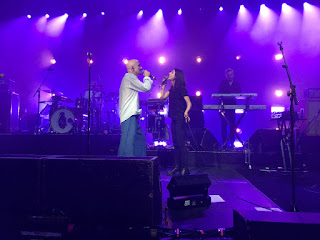 The second rare treat of the night is up next, I Defeat. Having Chloe in the band means that this dazzling duet can have the dust blown off it. During the VIP soundcheck rehearsal Tim explained that when they recorded it Sinead O’Connor happened to be in the studio, popped by and they wrapped it in about a half hour. They thought it too light, so stuck it on a b-side. It was only later that they realised it would have actually made a huge single. Being contrary is what James do best.

The back-end of the set featured more songs from Living In Extraordinary Times and finished with Attention – the perfect reverberating, but less brash bookend to Hank.

The encore was generally pretty standard stuff, with Many Faces filling feel-good sing-a-long slot vacated by the resting Sometimes. It is still a little hit and miss if the audience will actually pick it up and sing it back in the breakdown. The band probably though the odds were pretty low for a Monday night Cambridge crowd. But they did, and they sang and sang, demanding the band to pick up the beat again. James and audience left elated and exhausted after what was a stunning gig.

After the spectacular Royal Albert Hall gig two days before I was worried provincial Cambridge would be a bit disappointing. Not a bit of it. A smaller audience suited a more intimate and personal acoustic set and connection between the fans and band. I danced, I sang, I cried, and I sang some more. You can’t ask for better than that.

James played Pressure’s On, Hello, Coming home (Pt2), Broken By The Hurt, Just Like Fred Astaire, Quicken The Dead, All I’m Saying, Hank, What’s It All About, Getting Away With It (All Messed Up), Tomorrow, How Hard The Day, Moving Car, Five-0, Sit Down, I Defeat, Picture Of This Place, Leviathan, Laid, Attention, Moving On, Many Faces, Come Home.