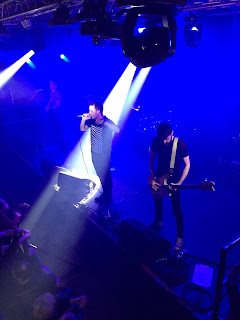 Show six of the mega tour and The Slow Readers Club are in Edinburgh for the first time, playing another triumphant gig. Stuart Ralston returns to his favourite venue in the Scottish capital.

The fourth and final Scottish date of the tour sees The Slow Readers Club take to the stage of the prestigious Liquid Rooms. It's testimony to their stature that they are making their Edinburgh debut here. The Liquid Rooms is a big old venue and is packed by the time the now familiar strains of I Feel Love booms from the PA system.

A storming, in-you-face Fool For Your Philosophy gets the show underway and gets a great response from the buoyant crowd. There's a slightly different feel to tonight's show from the previous night in Dundee. It's the start of the weekend for many and there's a party atmosphere. Unfortunately this means we get several “here we f'cking go” chants tangled within some of the songs!  It seems customary to behave like that at Scottish weekend gigs these days – save it for elsewhere please.

A pulsating Lives Never Known follows. Band are on top form again and Aaron's vocals are commanding. Lunatic is as fresh and sharp as ever, with Aaron utilising the huge Liquid Rooms stage to full effect. The keyboard riff of Start Again is greeted with knowing cheers from the crowd. Start Again is a fine example of a Readers classic – each musician occupies his own space, with Kurt's subtle guitar licks, Jim's lead bass lines and driving drums from David.

The only slow song in the set, Days Like This Will Break Your Heart, is stunning. The sound engineer added a touch of reverb to Aaron's vocals, making an already poignant, atmospheric song even more so. Since first appearing as the b-side of Forever In Your Debt, I've long since sang the praise of Days Like This Will Break Your Heart. It has never sounded better and gets an incredible response from the crowd. Kurtis takes lead vocal duties on early classic Lost Boys and owns it. Transitions from first to second and third album tracks are effortless and demonstrate what timeless songwriters The Slow Readers Club are.

Jim's haunting bass gets Forever In Your Debt underway. The pace builds and builds as the song progresses and it's the first big audience sing-along of the night. Lead single from Cavalcade is followed by lead single from the self titled debut and Sirens makes a welcome return to the set. In truth though, every Readers song tonight sounds like a single.  Sirens live has a greater urgency and energy than the studio version and another audience sing-along follows.

Supernatural has more bounce than Zebedee and is once again dedicated to their merch man Justin, much to his delight! You Opened Up My Heart just gets better with every outing. It's an incredible song in all departments; An impassioned, powerful vocal. Stunning lyrics. A dance groove from the best rhythm section around and those subtle, understated guitar riffs that only Kurtis Starkie can deliver. Sequenced again into Plant The Seed, the audience “sing” the keyboard intro and love every minute.

The only new song to feature on the tour so far, The Wait, has gone down well with the crowd and tonight is no exception. It seems more assured and is shaping up to be another big classic. Starting with Jim's punky bass line, Aaron delivers another soaring vocal. Back on familiar territory with Block Out The Sun. It's another big anthem and sing-along moment. When you look at the set lists the band have been playing, especially over the last year, it's incredible the depth and strength of material they have. Feet On Fire is yet another big hitter and a firm favourite with the crowd. At just over three minutes, it doesn't outstay its welcome. I Saw A Ghost and On The TV bring the set to a close. On The TV has become the favourite song to end the set again with the crowd singing Kurt's guitar line before the band start it up. The band have added a coda to the end of On The TV and it's sounding better than ever.

In just over an hour, the band rattle through fifteen of their finest compositions, and a future classic. It's all over too soon and it won't be long before we are all looking for ninety minute or two hour long sets, such is the quality of their material. We've said before that The Slow Readers Club should be mentioned in the same breath as bands like The Smiths, Joy Division, James and Elbow. On current form, it's easy to see why.