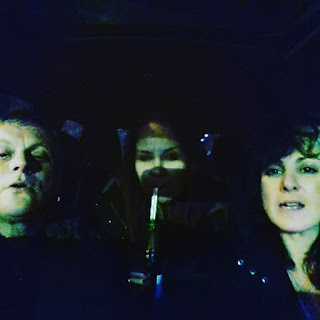 Cold Water Swimmers recently released their double A-side single Summer Breeze / I'll Be Your Witness. Ahead of their upcoming performance at Manchester's You Are Not Alone Festival at the weekend, we caught up with front man Chris to find out more.

Could you introduce Cold Water Swimmers and tell us a little about how you got together?

Cold Water Swimmers are Carrie Lawson , Selina Clements Woolnough and me. I spotted them playing at The Castle and told them the only thing their band needed was me, I was right. It blossomed from there really. Our first rehearsal was in Selina’s house in Prestwich on January 24th 2018, the day Mark E Smith died.

The name’s intriguing, it conjures up some deep conceptual meaning. Where does it come from?

I read about how your body reacts when you cold water swim “within seconds your heart begins to race and your blood pressure spikes” I like that it sums up how I feel about the best music.

Also, a friend sent me an article about how cold water swimming cures depression and I liked that too.

You’ve just released a double A-side single Summer Breeze / I’ll Be Your Witness. Could you tell us a little about them starting with Summer Breeze?

I call Summer Breeze a redemption song and hopefully the message is inspiring. It was a favourite from the first time we played it live, so we had to record it. We recorded it with long-time collaborator Ding at 6DB we wanted to get as close to how we sound live as we could and keep it raw and passionate. I think we did that we’re happy.

The single’s video is quite striking in the way it uses imagery of the band with lots of effects superimposed. What was the thinking behind the idea for it?

It was a case of my mate has got a studio in town, Deadbasic Studios, and a green screen and a couple of cameras. I just wanted us to perform the song and have fun there was no other art direction.

It’s just us miming along to the track and having a bit of a laugh to be honest took about 2 hours to film and our video director Thom Jackson a few hours editing and messing about, he’s done a great job for us.

And I'll Be Your Witness?

I’ll Be Your Witness is darker I wrote it on bad day in January. It came from a conversation I had with a mythomaniac. It’s about being able to live with yourself and all the things you say and do. I don’t think it’s a B-side I like the two tracks together like this a bit of light and a bit of dark that’s why I put them out together I hope they eventually get listened to like that.

You’re playing the You’re Not Alone Festival at Jimmy’s at 5.30 on Saturday. There’s been a lot of talk about mental health in music recently with some high profile suicides. Do you think enough is being done to highlight awareness and the right conversations are starting to be had on the subject now?

We’re happy to do whatever we can can to help, playing helps each of us protect our mental health so it’s a win win. Our music community suffers, often, more than most and I think we can all play a part in improving things. Our message is be kind and respect each other. How you do this music thing is so important for mental health, do things like give advice to younger bands and pass it on, say how much you enjoy another’s music, reply to messages and emails, keep an eye on each other and be kind, try to be honest…. It’s tough out there and we’re all going through roughly the same stuff but we can all be part of the solution.

…..Yeah but you’re right 5.30 Jimmy's… we can’t say we cure depression but we can say you’ll forget about feeling shit for thirty minutes at the very least…

How do you write songs? Is it a jamming process or does one of you bring songs to the others?

I bring the songs, Carrie and Selina bring their magic.

You’ve all been in bands before. Does it feel easier or harder now to build an audience and get acknowledged?

The audience will come when it’s ready to come; we try not to think about it. Is it harder to build an audience now to say in 1988-1998? I’d say yes, there’s so much choice and noise plus many have the attention spans of goldfish. There’s a risk that bands can try too hard become a PR wet dream in the pursuit of an audience they imagine they should go after then fail at being a band.

What are your plans after the festival on Saturday?

We’re going back in to the recording studio again with Ding to record two more songs, we’ve got gigs happening..next one after YANA is at the Salty Dog Northwich on Good Friday, April 19th with our mates Pagans SOH and Tinfoils that’ll be a cracker well worth the trip out of town for.

If you had to describe Cold Water Swimmers to someone who’d never heard of you before, where would you start?

I’d say do you like The Stooges and if they said yes I’d say you’d probably like us.