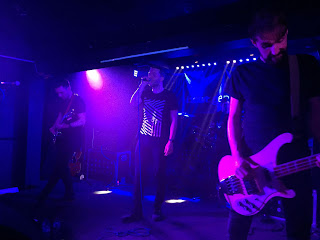 The fifth date of their marathon UK and European tour sees The Slow Readers Club in incredible form, mixing up old and new, and winning over yet another new audience. Stuart Ralston enjoyed the short trip to Dundee to catch them.

Beat Generator is a classic rock n roll venue situated in the heart of Dundee and the perfect location for The Slow Readers Club to showcase their craft to another new audience. The Scottish leg of the tour has already delighted crowds in Inverness and Aberdeen and tonight's Dundee crowd were well and truly mesmerised as the Readers delivered an incredibly diverse set.

Lives Never Known, a rarely played cut from last year's Build A Tower album slows the pace a little after Fool For Your Philosophy. Lunatic cranks it up again and the band are on impressive form - this full time approach sees the band tighter than ever and Aaron Starkie's vocals are positively soaring, ably backed by brother Kurtis. At the back, David Whitworth drumming drives Lunatic along and the band have managed to turn a heartfelt song into an uplifting triumph. The same could be said for the next Build A Tower rarity Not Afraid Of The Dark.  It's almost been given a makeover from the album version with some extra flourishes from Kurtis and added falsetto from Aaron.

Classic single Don't Mind is the only slow song of the night and holds its own against some of the newer songs in the set. For me, it is reminiscent of The Smiths, both lyrically and in mood. A real highlight in the set tonight. Aaron suggests the dancing can resume as Lost Boys gets underway.  Lost Boys reminds us just how good that first album was.

Forever In Your Debt can pop up anywhere in the set, and despite being an ever present over the past six years, it never disappoints. Jim Ryan's bass bounces along. For me, it still remains the Readers song I'd play to someone who had yet to experience the band. Whilst Ryan's bass dominates, Kurt's guitar slots in so subtly, Aaron's vocals are anthemic and Whitworth's drumming finds a Northern Soul groove. Now, it's almost impossible to top that but somehow they manage to – Grace Of God sounds incredible. Delivered with a real passion and drive, it surpasses the studio version.

My favourite cut from Build A Tower, You Opened Up My Heart, starts with that beautiful Spectoresque guitar riff oozing from Kurt's vintage Vox amp, before the incredible rhythm section of Ryan and Whitworth kick in. There's so much in there, and after the opening section, the "Believe Enough To Lose Control" mantra is stunning. As is now customary, You Opened Up My Heart sequences into the electro pop joy of Plant The Seed. Of course, the crowd love it.

New song The Wait sounds fantastic. Opening with an almost Stereolab inspired bass, it's another up-tempo song with loads in there to listen to. Whilst some fans have considered The Wait to be still at the demo stage, it seems well formed to me and album four is already looking promising. The Wait is almost a return to the slightly darker sound of their debut long player and we look forward to hearing more new songs over the course of this incredibly busy year. The Wait is warmly embraced by the crowd - “it's passed the consumer test” laughs Aaron before he dedicates Supernatural to their good friend, driver, merch man and magician Justin, who spends tonight watching from stage left, positively beaming. There's no let up in the set and the closing section (Block Out The Sun, Feet On Fire, I Saw A Ghost and On The TV) is every bit as upbeat, inspiring and uplifting as the rest.

Anyone present tonight who witnessed the seventy minute set, and wasn't a fan beforehand has undoubtedly left converted. The musicianship, the songs, the anthems and some obscurities were all there tonight, whilst Aaron Starkie owns the stage with a commanding, engaging, presence. The Slow Readers Club are a team though, and each and every member adds their touch of brilliance and genius to the proceedings.