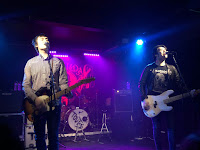 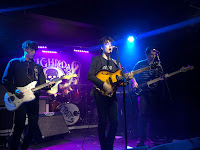 Touts' tour in support of their recent single Before We Go Forward hit Manchester's Night And Day Cafe on Friday night with an hour-long twenty one set that was confrontational in its raw punk energy. Support came from fellow Irish band Inhaler.

Inhaler came highly recommended. They also came with the caveat that their front man Eli is the son of Bono. The first point was valid, the second frankly irrelevant other than possibly being an unwanted distraction because Inhaler are very much their own men, an impressive five-piece that already at this early stage in their career possess everything they need to become a very big deal. Over the course of six songs, concluding with their recent single It Won't Always Be Like This, they demonstrate an ability to craft soaring rock anthems that deal in human emotion rather than cliche and by being a band in the proper sense of the word. 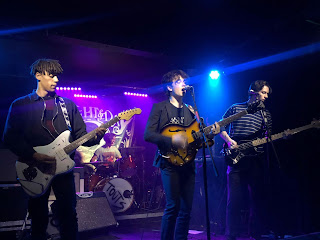 They've already cast aside their previous single I Want You from their half-hour set and replaced it with the likes of Ice Cream Sunday and My Honest Face, songs that should catapult them further forward. Driven forward by Ryan's drumming and Josh's impressive guitar work, they both tick all the boxes that make them radio-friendly yet still show musical ambition and the desire to stand out from their peers. We're impressed.

Touts seem angry. They're provocative in their approach to the crowd, telling us it's like a funeral rather than a Friday night out demanding that we get involved. They get their wish by the end but we're half way through the mammoth twenty one song set before the mosh pit starts. It’s a little frustrating that they judge whether we're into what they're doing by whether we're jumping around or not when the response when they pause for breath gives that answer unequivocally.

For a band without an album to their name it's an impressive canon of work they've got to their name already and it's got a fierce fuck you spine running through it. Matthew and Luke's vocal onslaught is unrelenting throughout, there's no pause or respite as songs run from one into the other rarely taking the foot off the accelerator pedal and veering off course.

Their Joe Strummer cover Before We Go Forward is dispatched early on and whilst we're not often fans of covers, it's the perfect encapsulation of what Touts are about. They channel the energy of their heroes and translate it into their own modern day interpretation, inevitably coloured on the likes of Bombscare by their own experiences in Derry and on Frosty Cack and Saturday Night Scumbag (where they tell us there's plenty of inspiration in the room) by the experiences of anyone growing up in a place where times are hard. 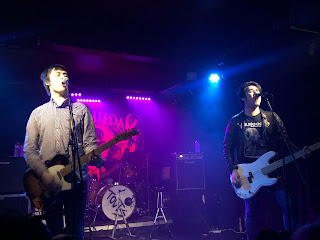 Their vitriol is aimed wider on Pretentious Revolutionist and Political People yet they never lose the directness that keeps them sounding fresh despite the mammoth number of songs in the set. Despite Matthew telling us his throat is fucked, and it's no surprise given they're approaching the end of the tour and their all-or-nothing approach doesn't provide for protecting it, it simply adds to the rawness of the performance. And that's Touts in a nutshell - no holds barred, in your face, all-or-nothing and refusing to stop until you've succumbed to them.