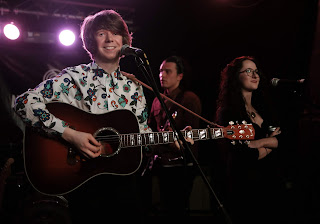 James Holt launched his new single Come Out To Play at Manchester's Night People on Friday night. Julia Grantham reports back on the outsider who's barging his way into the conscience of a growing band of admirers. His headline set was preceded by Mano McLaughlin showcasing songs from his forthcoming Then Lightning album.

Becoming familiar with a band or an artist these days is an organic process if you associate yourself with a particular musical scene. James Holt is someone who has been on my radar on and off for a while, and having been mentioned to me by various friends, musicians and having seen him on social media, I finally decided to stop and listen: I made a point of getting in touch with him and offering to review his music without ever having heard a song of his all the way through. And why? It just felt right. His latest single Come Out To Play grabbed me like a warm hug from a dear friend as soon as I hit play via my inbox.

Walking into Night People in central Manchester on Friday evening just gone, was a little bit like walking into a Christmas Party. That thing when you arrive with people you love, greet people you want to see and are introduced to people you feel happy to then know. I urge anyone to go to see live music if you really feel the need to be there, and James Holt? Well I’d highly recommend you see him too. Having been described as possessing a voice like John Lennon, and being compared to The Beach Boys, he is steadily earning some well-deserved attention from radio and established artists such as Brian Eno. However, despite being able to understand where those musical references come from, one thing is for sure: James owns his own sound and it was a privilege to see him perform his wonderfully honed and crafted songs with a full band. 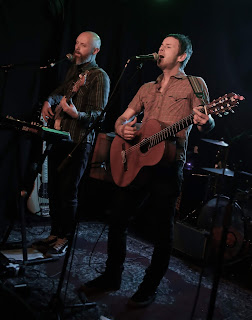 I managed to catch the second support act and regretted not seeing the first: Toria Wooff, who has just the most beautiful voice. I did arrive, however, in time to see Mano McLaughlin, an artist I’d never heard of, and one for whom I am very grateful to now know. He had all the charisma and charm of the kind of person who is quietly confident in himself and his art- rightly so, and yet humble and friendly simultaneously. Little did I know that he has been acclaimed by Guy Garvey of Elbow, or that he has previously been chosen as a featured artist on BBC radio 6. I was immediately struck by the use of a melodica on stage, something I have only recently come across, and yet it works so well as both a pleasing aesthetic and as a reminder of how such a simple instrument can be used to great effect to add layers to a song.

Highlights during Mano’s set were Dog's Leg which had a very wonderful Spanish guitar sound in places and the harmonies reminded me a little of Crowded House. Secondly, Gee Bees which was altogether more bouncy, and driven by bass and percussion. The vocals were delivered first in a two-part harmony, before building up to all four band members singing together, giving the song a wonderfully heart-wrenching and rich sound. What a pleasure it was to behold such a lovely set which created a buoyant atmosphere ahead of James Holt.

Arriving on stage, it was immediately apparent that James was happy to be there. He appeared comfortable having the attention, holding the floor, and seemed to genuinely enjoy entertaining his crowd which he did with ease and charm. Between little anecdotes, jokes and the enticing way in which he encouraged audience participation, came some truly wonderful music. People talk of musicians being tight on stage, but this was something more. There was a sprinkling of magic in the air when James and his band started to play. Perhaps it was just the anticipation of the crowd, the simplicity of people enjoying music, and yet of all the gigs I have been to, this one seemed to have that rare feeling of just being right: new music at its very best, both perfectly created, layered and with potent and meaningful, easily articulated lyrics.

The crowd was good mix of people and those people were smiling, polite, courteous and kind. It was a beautiful thing to be a part of, and my attention was caught and held throughout his entire set. The tempos and rhythms ebbed and flowed, songs were sad, uplifting and political, showcasing an intelligent ability to write powerful songs, but demonstrating also that James Holt is a musician with a lot to say, yet with the skill to impart that with a breadth of musical variation. Very impressive and pleasing at the same time. 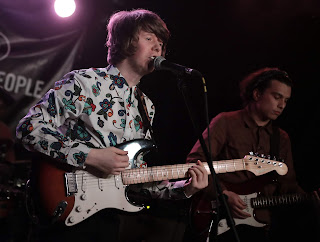 It’s hard to talk about my highlights as the whole set was so wonderful, that I’m struggling to recount it in words! Someone once said that ‘sad songs are the best songs’ and as such I would have to say Alone Again stood out as being melancholy, with a kind of swirling bluesy folk feel to it. The verses are stripped back to just simple vocals and guitar and yet when the title line is sung, it is accompanied with a heavy percussion, enticing the audience to dance and sing, almost as if to suggest that being alone again is merely a new beginning. I loved that air of positivity within a sad song.

Come Out To Play is a perfect example of a catchy, melodic pop song and yet one of superb quality with lyrics that had James’ crowd singing, swaying, smiling and dancing. I glanced over the room during this song and you could see, sense and feel the jovial vibe of this number spreading its wonderful melody throughout all of those that were fortunate enough to be a part of it. It’s a playful song, and yet one full of hope. The repetition of the title in the chorus seems to impart that no-one should hide, and yet to hear it live and have it sung in front of you gave it a sense of conviviality: we had all come out to hear James play!

This was the very first time I came out to hear James Holt perform live, but it certainly won’t be the last. All I can really say is: if you like songs that are wonderfully rich in harmony, layers and sung with a beautifully articulate voice, then please listen to this fabulous young artist. He might just be on the cusp of reinventing modern pop music. I really hope that he does just that.