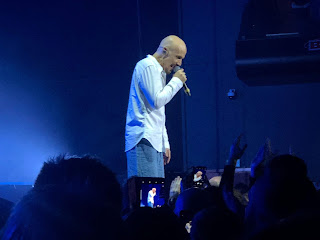 James’ Living In Extraordinary Times tour came to an interesting conclusion at shiny new Hull Bonus Arena for the last night of the tour.

The acoustic opening set has been the highlight of the evening at many of the shows across the tour, but tonight any fears about it not working are realised. First of all, the sound simply isn’t loud enough for the hall we are in, the volume needs to be at least double what it is. That creates a number of problems; some of those that aren’t familiar with the rarities that make up the majority of this set start to talk, meaning even half way back into the hall, it’s almost impossible to hear the band properly. More people talk because they can't hear the band and it becomes a concertina effect.

Tim tries to direct them towards the bar, but that’s a difficult sell given the band whose name is on the tickets are on stage and the fact the bar area is just that, a bar area with not a great deal of space to stand around and talk. So what you get is the two sides of the James fanbase in the same place - those that want to listen to everything and those that just want a few of the hits that they know James for - and that’s never a good mix. 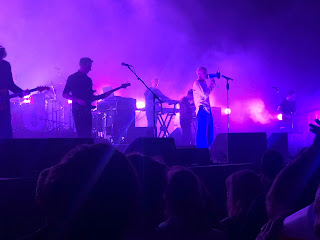 Most of the intimacy and subtlety of the acoustic set is lost as a result of this and probably would have been even without the talkers. Sit Down obviously changes things for four minutes, although when they change the second verse to the one from the original rather than the hit version there’s some confusion and Just Like Fred Astaire does also get the crowd going to a lesser extent. The other five though are no one’s soundtrack to a raucous Friday night out - the difference between an intimate seated show in Bath and an arena show in Hull becoming very apparent. It’d be a real shame if this put the band off from experimenting with something similar again because it’s been exhilarating when the connection has been made at other shows. The venue choice and timing needs to be right though.

The volume level doesn’t get much louder for the electric set if we’re being honest, but there’s much more going on sonically and there’s more familiarity to most of the set. The powerful message, including the visceral visual one of the strobes, of Heads opens up proceedings followed by a twisting winding What’s It All About. You sense there’s a bit of fire in the belly on stage, a steely determination to get their message across in an arena where there’s clearly a bit of an edge. More of that later.. Curse Curse is one such example, yet it’s Ring The Bells that really gets the place buzzing. Tim shakes the life of his maracas, thrusting it into the air as Andy screams into the microphone as the band let loose as the song takes its rollercoaster ride to its emphatic euphoric conclusion. 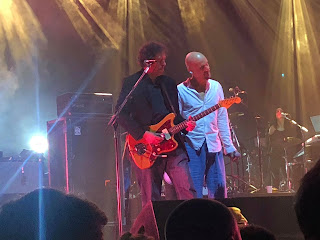 Any hopes of a hit-laden set to soothe the tension that feels palpable in the hall though are dismissed by.a glorious Five-O with Saul’s violin at the helm, the stage bathed in beautiful purple light, is a highlight of the night with Tim losing himself in the band’s creation as he sits on his chair to rest his injured foot. Extraordinary Times has him down on the walkway as the industrial guitars crank the volume up as far as the limits will allow them.

Johnny Yen feels reinvigorated, the improvised middle section urging us to let go of our boredom, frustration and many other downers on life and turn them into inspiration. Moving Car and Attention show a side of the band that the casual fan might not be aware of - the seismic changes in listening habits that Spotify and the need for instant gratification rather than listening to a piece of music as a whole have made life more difficult for album tracks and even more so for b-sides. It’s moments like this where James walk a fine line.- it’s not an unreasonable expectation to expect bands to play their best known songs at fifty quid a ticket, but there’s a counter-argument that if you want to just hear the songs you love play the way you’ve always heard them, you’re better off at home listening to it. Tim does tell those disapproving of the choices when introducing Moving Car that it is the Living In Extraordinary Times tour, so those who didn’t listen and do their homework will get told off by their teacher. 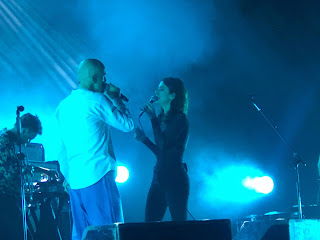 Things then take a sinister turn. Picture Of This Place is a verse in when Tim stops everything. There’s a fight in the middle, he tells security to get in and sort it out which they do eventually, but not before he moves to go in himself to resolve it before Saul tells him not to. He’s visibly shocked though and the blood mixed into beer on the floor at the end suggests it wasn’t pretty. But from it comes a moment of beauty. A woman grabs his attention, whispers in his ear that she lost her husband a year ago and life’s too short and not worth doing that for. They change the set and play Moving On instead. Tim goes on what looks like a very brave and bumpy crowd surf to the sound desk and back, risking his foot to the alcohol-fuelled crowd, but safe for one idiot who grabs him towards the back, he’s returned safe and sound.

Laid and Getting Away With It (All Messed Up) send the place into delirium, everyone lost in unison whatever their views have been on the evening’s proceedings so far, although there’s more trouble down the front at the start of the latter that requires Tim’s attention and a request for us to look after each other. Leviathan soars majestically with the declaration of hope of finding love before they drop the bomb, drops and then roars back in.  The main set is finished by a roaring version of Sound, Andy ending up on the steep banks of the balcony seats as Tim stares intently up at him as he demands “do something out of character” as the song takes its own path.

With all the shenanigans that have gone on, there’s only time for a one-song encore. “This is our only answer to all this” Tim tells us before they start Many Faces, an antidote to what’s gone on in parts of tonight’s gig and what’s going on in the country and the world in general. As the crowd take the song’s message of hope and unity “there’s only one human race, many faces, everybody belongs here” from the band and sing it back, the power of the connection is palpable and the utopic message crystal clear. Whether it sunk in or not is a different matter.

James played Coming Home (Part 2), Hello, Broken By The Hurt, All I’m Saying, Sit Down, Pressure’s On and Just Like Fred Astaire followed by an electric set of Heads, What’s It All About?, Curse Curse, Ring The Bells, Five-O, Extraordinary Times, Johnny Yen, Moving Car, Attention, Picture Of This Place (cut), Moving On, Laid, Getting Away With It (All Messed Up), Leviathan, Sound and Many Faces.