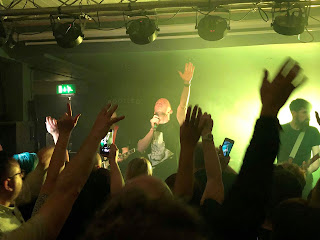 The Slow Readers Club tour rolled into Blackpool on Thursday night for an intimate sold-out show at the Bootleg Social. In front of an adoring crowd they ran through tracks from their three albums to date as well as a new track from their recent recording sessions as they continued their seemingly endless trek through the provincial towns and circuit venues of the country on their first major nationwide tour as full time musicians.

"Is anyone here from Blackpool?" Aaron asks half way through the set to a huge roar from the back of the room. The front rows are filled with the Readers travelling family who are probably currently seeing more of them than their own families, such is life on the road. Whether people are seeing them for the first time ever or the fifth time this week though, there's an air of celebration in the air. The Bootleg Social is a real gem of a venue, nestled in a basement among a street of karaoke bars and fish and chip shops that characterise the modern day seaside town. It's an impressive little place, capacity we'd estimate at around two hundred and fifty, but it's bringing bands back into a town neglected by most on tours and it does things properly with excellent sound throughout the night and staff that know what they're doing.

It feels like The Slow Readers Club are on a real roll now, that going full-time has allowed them the time to rehearse and get themselves tighter and tighter in their performance without it ever feeling like they're just playing songs by numbers. There's an energy to the whole set, from opening track Fool For Your Philosophy through the closing I Saw A Ghost, where Aaron's almost drowned out by the hordes singing back to him as two hundred and fifty pairs of hands are raised skyward as some form of communal exorcism.

That sense of unity runs through everything the band does like a coronary artery, absolutely vital to what the band have created over the past decade and brought to wider audiences in the past three years. When they get to the end of recent single Supernatural, Aaron initiates a call and response on the "can't wait, won't wait" vocal with the audience who respond. As the crowd try and take On The TV and its signature riff off the band and make it their own, Jim admonishes them for failing to clap in time and makes them practice it with an impromptu refrain of the song that's become the band's unofficial anthem. 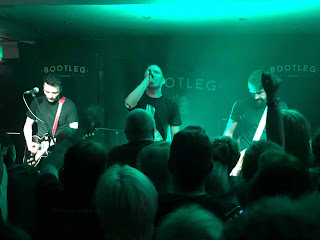 For the uninitiated in the Readers' music and those that came to the party with last year's top twenty album Build A Tower, there's plenty to learn and discover in the set - half a dozen tracks from their breakthrough album Cavalcade and three from their debut as the band seek to mix their set up as they progress across the country - which makes them an irresistible proposition, a new band to many but with a set of songs that allows them to pull off a seventy-five minute set without the quality dropping.

That keeps the crowd bouncing throughout, a look around at the beaming faces mouths open singing along with every word confirming the special place the band have captured in the hearts of many. It's not a cool crowd, but one that will remain loyal and not have their heads turned by the next shiny bright things and that augurs well for the band's brave decision to go full time. It's all over too soon, the READERS chants almost deafening anyone within earshot as the crowd holler in vain for more.

We may not see them in venues this size ever again, but even having sold out Manchester Apollo late last year with a capacity fifteen times bigger than this, the band don't scale anything down or hold back. This genuinely felt like an arena-ready band playing an intimate show rather than a breaking band doing the leg work to take the next step.

The Slow Readers Club played Fool For Your Philosophy, Lives Never Known, Lunatic, Lost In Your Gaze, Start Again, Lost Boys, Block Out The Sun, Supernatural, You Opened Up My Heart, Plant The Seed, The Wait, On The TV, Cavalcade, Feet On Fire, Forever In Your Debt and I Saw A Ghost.