Louie Louie - So It Begins EP 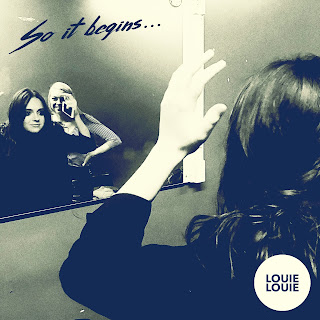 So It Begins is the long-awaited debut EP from Louie Louie. Across six-track the Anglo-Portuguese four piece finally capture on record the sound that has made them much loved on the underground scene in Manchester.

The EP starts with Going Down, a song opening with a confident riff and with crisp clear vocals laced with lush harmonies running through it. “I’ve been looking for some kind of direction, I’ve been searching for another dimension” sings Rita with a romantic optimistic tone to her voice.

Careless Collision is ushered in by a rhythmic drum pattern that dictates the more claustrophobic opening of the song with what feels like Rita pouring her heart out. The song goes through a number of sections, opening out as it progresses into a more widescreen vision, more vocal harmonies lifting it and a guitar solo taking it off in the distance before the chorus comes back.

Carry The Man will be familiar to longer term followers of Louie Louie. This version feels even more dramatic, as if scripted from a dark movie where you don’t quite know what’s happening and it unsettles you. Rita’s vocals hint at an unspoken menace, of having dominant control of the situation. It might not have the delicious harmonies of the previous two tracks but its impact is more potent.

Solstice is more sparse in its opening, a reflective look back to earlier days when they were “three sheets to the wind in the back of your car,” building slowly but surely to the guitar kicks in and Rita extols the virtue of “live, whisky and art” before those memories get brought back into the here and now.

Play House was their recent single, a tight taut with hints of glam rock allowing Rita to let loose more than previously on the EP, big backing vocals and a huge guitar solo running through it. It visits lots of standard rock and roll touchpoints, but Louie Louie ensure their personalities prevent it ever being predictable in any way.

The EP concludes with the stripped down Build A House. The sparse instrumentation allows a more rich expressive side to Rita’s vocals as she muses “I was thinking maybe we could build a house, find a new place, find a new start” as she travels through the uncertainty of love and relationships in the song.

So It Begins has been a long time coming, but what it does is perfectly summarise why Louie Louie have a special place in the Manchester music scene. Low-key in their presence, but loved by those who have crossed their path, they have an innate understanding of how to craft songs that take their influences and merge them into something of their own with their personality writ large across it.