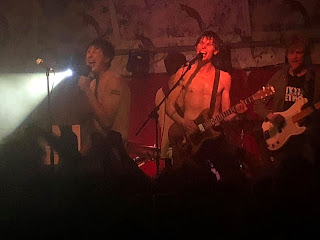 With the release of their debut album proper Nihilistic Glamour Shots behind him, Cabbage are regrouping and refocusing as they prepare the follow-up. They recently announced a low-key tour and we caught up with the third night of that tour at a raucous sold-out Deaf Institute in Manchester for a set of old favourites and an insight into their new direction.

Heavy Rapids open up proceedings with a set that echoes their name - heavy and rapid. Their quick-fire songs are like mini explosions of energy, sharp angular guitars, insistent drums that shoot staccato bullets at the crowd and vocals delivered with such urgency that sometimes it's hard for the audience to keep pace with them. And for the most part they don't, which is a real shame because they seem like a band that send so much energy and feed back off it having seen a couple of songs at one of their hometown shows in Glasgow a while back. 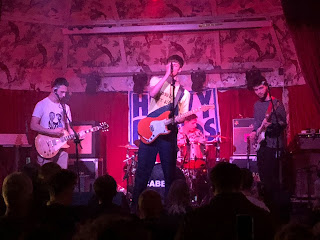 It's an odd audience reaction and an undeserved one given how they respond to Cabbage a short time later and the fact that songs like new single Paisley Pattern and their debut Going Down, which finishes the set and is introduced with a reference to Wembley, possess that same direct energy of the headliners and the way they share and exchange lead vocals adds diversity and an extra edge to their tense set.

Cabbage's crowd is an interesting one from gnarly old punks excited by seeing a band that's rooted in their ideals (and the eulogies to the dearly departed Ray Boddington feel like they've lost an immediate family member) to young kids excited by something that doesn't fit the mould that's being spoon-fed to them by radio and social media and which excites and provokes them. It makes for a real contrast although from the minute Cabbage strike into Torture, the newly-reinforced floor of the Deaf Institute's music room is subject to them bouncing as one. 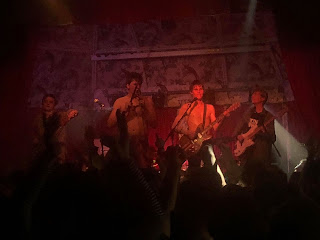 The set feels like it's looking back and starting to draw a line under Cabbage to date. There's early singles Kevin and Dinner Lady from their debut Chou EP, the three glorious singles Uber Capitalist Death Trade, Terrorist Synthesizer and Necroflat In The Palace with which they announced themselves to a wider audience coupled with Tell Me Lies About Manchester and Fickle from the former's EP, five tracks from Nihilist Glamour Shots, EP track A Network Betrayal (dedicated to anyone who's had a shit experience on Northern Rail which is basically everyone) and three new songs that point to where Cabbage are heading next.

They open with Torture, their recent single and Lee jokes at the end that they're "masquerading as a pop band." It's a tongue-in-cheek statement, but one that also bears some credence in the sense that it and the other two new songs - Raus and You've Made An Art Form - feel like a return to a more direct, loose approach that characterised those early releases. The crowd reaction is strongest, very noticeably, to those early songs rather than those from Nihilist Glamour Shots as Cabbage suffer a little from the syndrome that afflicts most bands that have got popular in the last fifteen years in that people want to hear those early songs above everything else. Hopefully Raus and the 70's inspired punk sound of You've Made An Art Form will help redress that balance and on first listen they sound well set to. 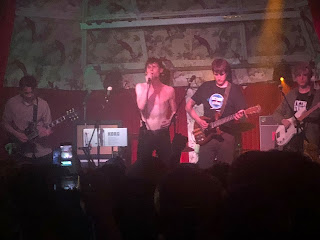 The tribute to Ray is a heartfelt one, Lee heading side-stage to unfurl a Piccadilly Rats banner that they'd been given earlier in the day and dedicating Tell Me Lies About Manchester to him. When it reaches the line "The Piccadilly Rats discovered the ecstasy pill" it feels like everything else stops as three hundred people scream that line as one.

The song itself is chaotic, like most of the night, as Cabbage breathe new life into old songs, seemingly permanently on the edge of collapsing under the weight of their own madness. It's in those moments though where Cabbage are at their most powerful best, the anarchy, unpredictability and sheer momentum of what they're doing far outweighing any notions of note-perfect replication of the records that could never hope to capture the spirit of this band. In these venues where you can see the whites of their eyes and the hairs on their chests and they feel like they're amongst friends, Cabbage are still one of the most potent bands around.