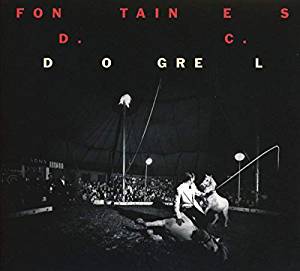 The burning question is are Fontaines D.C. the most important band out there right now? They represent a number of exciting new bands from across the Irish Sea producing great new music and they are at the forefront of an exciting new scene. Jason Wynne takes a closer look at their highly anticipated debut Dogrel.

Fontaines D.C. are the band that everyone seems to be talking about. All band members met at Liberties College, Dublin and through their love of poetry a unique bond was formed. They are post-punk, predominantly guitar-driven and Irish – some might say they've heard it all before but with their fantastic, eagerly awaited, debut Dogrel we have a bold, brash, soulful record that might quite possibly be the best debut album I think I've ever heard.

The Irish quintet of Grian Chatten (vocals), Conor Deegan III (bass), Conor Curley (guitars), Carlos O’Connell (guitars) and Tom Coll (drums) have unleashed an album to the world that they should be incredibly proud of.

Big opens the album with even bigger drums and thunderous bass and Chetten's exclamation "Dublin in the rain is mine, A pregnant city with a Catholic mind" grabs your attention from the off. The enigmatic ultra-confident frontman Grian Chatten continues the battle cry by telling us "My childhood was small, But I’m gonna be big". In the space of two minutes the riotous Stooges-like opener lays down the marker for an album that doesn’t disappoint.

The shouty Sha Sha Sha with its tumbling drums and strumming rhythmic guitars complement and balance each other perfectly. Put into the mix the unmistakable infectious brogue of the self-assured Chatten and you have a spiky punk pop classic. "There's always going to be tears" claims the frontman with the repetitive raspy "Sha Sha Sha" chorus.

Too Real has a Strokes-like intro with its heavy guitars before the record hits punky breakneck speed. As the guitars swirl, collide and battle with each other we hear Grian tell us "I'm about to make a lot of money" before turning into a menacing, snarling beast asking us "Is it too real for yaaaa?!!" The repetition in the chorus is a masterstroke throughout the record and this song, already a live favourite, is another example that this album is full of singles. All killer no filler. As the impressive Conor Deegan III's bass closes out the song we move nicely into my favourite song on the record.
Television Screen offers another new dimension for a band accused by some of being a bit too one dimensional at times. Imagine a New Order bass, drum and guitar intro but with a beautiful Irish drawl of a vocal to lead the song on a meandering path. Often criticised for talking rather than singing the songs this is the best vocal on the album from Chatten. The bass of Deegan III is mesmerising and like most of the songs from a slow start there's a release as the song explodes into life with the guitars doing battle with each other as the drums thrash about.

The beautiful ugly sounding Hurricane Laughter with its warbled poetry is Mark E Smith–like if you could imagine Smith telling the tale to a bunch of regulars down the local boozer while downing a pint of Guinness. It's spirited and chaotic as Chatten rolls his r's, rants and challenges the piercing guitars of his bandmates to do battle. The rhythm section is tight and the riff is easy on the ear. As the guitars screech you can feel yourself stuck in a room with its walls closing in, claustrophobic like, “tearing down the plaster”. The song closes out to the repetitive "And there is no connection available" as the intensity gets higher as the anger and frustration in the vocal increases.

Following on from the intensity of Hurricane Laughter we have the mellow Roy’s Tune. A perfect chill out song whether it's the first song you hear in the morning or the last thing at night. Again the dulcet tones of Chatten draw you in. A love song of sorts - "There is no warning, there is no future" before he tells us "The lights in my eyes they were evergreen". It appears you can be young and still be an old romantic hanging on trying to keep that romance alive.

The Lotts is possibly the darkest song on the album. A bleak tale of misery and sadness. The opening chords remind me of early Cure. The music is primitive with intelligent lyrics just like the rest of the album but when Chatten tells us "Lotts on the corner she ain’t ever coming down" and "there aint nothing here for me" you can sense he's engaging himself in deep thought and feeling anger and frustration at the way the area he frequents has changed. Battered and bruised but not broken we even get a "la la la la la" moment where you can imagine when played live the crowd will sing along in harmony as Grian and band stand there with wry smiles incredulous by what is happening.

Chequeless Reckless is more rock and roll than anything else on the album. From the opening salvo of guitars there’s an immediate impact on the ear. With lyrics like “A sell-out is someone who becomes a hypocrite in the name of money” and “money is the sandpit of the soul” Chatten spits and snarls his way through the song ably assisted by his tight knit band of merry men. Like all the songs on the album it’s incredibly catchy through its simplicity and the song closes out with the question on everyone’s lips right now - “What’s really going on?”

Liberty Belle is a raucous and sonic assault on the ears. The band create a cacophony of noise with the thunderous drums of Tom Coll adding extra bite to this punk-pop number. As if on the backstreets of Dublin this song smacks you right between the eyes as Chatten bellows “You know I love that violence that you get around here, That kind of ready-steady violence, that violent 'how do you do'”.
It’s a song based on the Liberties area and, in particular, The Liberty Belle boozer in Dublin 8 where the band would frequent and where they would encounter certain characters just “very very tired of having that same old boring conversation, Just like me. Just like you”.

Like most things Fontaines D.C. the boys are unashamedly Irish - Dublin County (D.C.) actually - and this, like a lot of their songs, examines the humour, the wit, the charm and the many personalities that make this city so great.

The anthemic Boys In The Better Land reminds me of an early Oasis - when Oasis were good. The attitude, the swagger, the full frontal attack of the guitars of Curley & O’Connell. A togetherness and a confidence in the sound they are creating. Being Irish is cool again and the debacle of Brexit in the UK only accentuates this further. In a recent interview with the band they talked of a sense of increase in Anglophobia given the current state of affairs. “He spits out Brits out!, only smokes Carrolls” hollers Chatten although this isn’t necessarily the case as the character Grian talks about here tries to grab hold of anything that might make them feel part of something or give them an identity they feel they don’t have. They tells us “If you're a Rock Star, Porn Star, Superstar, doesn't matter what you are, get yourself a good car, get outta here”. This wouldn’t look out of place on Definitely Maybe although the mere mention of Joyce “a face like sin and a heart like a James Joyce novel” most certainly would. The song’s fast-paced, frantic and furious and leaves you gasping for air. With only one song to go we get the breather we need.

As we reach the final song of the album we get the sense of the romance of Dublin from a dreamers perspective. Dublin City Sky is a love letter to the city and it could be The Pogues/Shane MacGowan serenading us back to those places we long to be at. The guitars and drums are gentle and it has a traditionally Irish folk sound as we are taken on a journey of love, loss, change and not being able to let go. “I love you even still” coos Chatten. We are soothed by the heartfelt vocal as we gently float down the River Liffey, dare I say it, as the sun breaks, “underneath the waking of the Dublin City Sky” reflecting on the love-hate relationship of a city that appears to have been gentrified and has lost its charm “and it all makes sour to watch my lover wrap herself around the flag of power”. Exploring where it all went wrong but also where it can be made right again....keeping the light alive, keeping the culture alive.

Fontaines D.C. are on the cusp of something huge. They’ve been pulling up trees Stateside with their enthralling live shows going down a storm most recently at SXSW where they were simply on fire. Back in the UK and Ireland they are getting a vast amount of attention right now – the fruits of their labours. With the hugely anticipated release of Dogrel comes the huge expectations and here we have as strong a debut album, if not the strongest, I think I’ve ever heard. It’s safe to say they’re gonna be big.

The most important band out there right now? The answer is yes if this album is anything to go by.