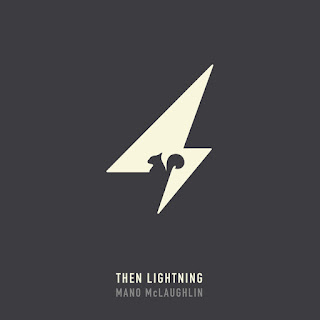 Then Lightning is Mano McLaughlin's long-awaited second album, the follow-up to 2013's Peach Got Bones and demonstrates why many of his contemporaries rate him as one of the best singer-songwriters around despite the lack of recognition he's had from the industry over the past few years. Then Lightning might not change that, because things aren't as simple as great music automatically getting the acclaim it deserves, but it's a record that will disarm and charm anyone fortunate enough to cross its path.

10 Metres From Rats is an intriguing start to the record, the album's first minute the one point where it veers away from the art and craft of songwriting into something a little different. A child's voice and a guitar that sounds like it's soundtracking her story until it gets louder and Mano's voice takes over. Lyrically it strips back the important of the individual in a world that's run by invisible forces, declaring the impotence feeling of "We're only monkeys in hats throwing rocks at the moon" before the voice comes back at the end.

Any thoughts of the album taking tangential routes are dispersed by Thirteen Pieces Of Quiet, Mano's story of the events of Bloody Sunday and the deaths of thirteen protesters at the hands of the British Army in Derry. Rather than deal in big political statements of other songs written about the tragic events, it's a personal reflection of watching it on the TV and the impact that it had on the community and the music follows a similar path, its intimacy accentuating the song's words rather than seeking bombastic impact.

The Morning After, one of the album's lead singles, is proof that the accolades thrown at Mano by his contemporaries are more than justified. It's simple in its execution, no adornments for effect, just a beautifully crafted song that reflects on learning lessons - "got stuck in the tick of time, I named this moment mine" - with female backing vocals providing additional warmth to Mano's world-weary reflections, despite which the song leaves you feeling that everything will be alright.

I Haven't Changed has a similar feel to it and demonstrates why Mano makes such intimate connections with his listeners. It looks back with a wistful "there is no myth, no mystery to me, tea cake for breakfast and curry for tea" compared to the song's other subject who changes like the seasons. Clocking in at just two and a half minutes it envelops you in a comfort blanket that feels like familiarity, but is actually just the sheer quality and simplicity of the songwriting.

Sick Like A Wheel is stripped back, allowing Mano's vocals to take centre stage, produced to emphasise the emotional qualities of his voice as he declares "there is nothing I have learned except to hit the bottom is to have returned back to the place the trail started from, we've got the map but they've got the gun." Backing vocals are layered carefully in the right places to lift the song where it makes the most impact.

The album's title track is more adventurous in intent and production, laced with a feeling of drama and building as additional instruments and vocal harmonies provide the lift to the song to give a different perspective on Mano's songwriting, the ability to take the bedroom demos and develop them, allow them to bloom into something more expansive without ever losing sight of the core of the song.

Who Broke My Ego starts with a mouth organ, usually the sign of a song that's going to deal in self-reflection and self-assessment and this is no exception. Warm vocals in the chorus help to soften the message a little as the song deals with piecing yourself back together and not been quite straight but getting on with it in any case rather than wallowing.

Don't Look is another song where there's a positivity to the reflective mood that Mano's voice creates and once again the crisp, clear and uncluttered production gives the song space to breathe and the listener space to relax and breathe in the song's structure.

Big Truck takes a more political stance, using the analogy of the steering being fucked to lament the lack of control people have over what goes on in politics as we approach a place where "my head hit the wheel, heading for a land where the Tories own the mountains."

Northern Line strips things back in the verses, talking of how people are judged by where they're from whilst countering it with "you're ashamed to be English, but you've gone and got a tattoo of your Mum"as how stereotypes can be created. The chorus has layered vocals and have the feel of coming from another song, impressive given it clocks in under three minutes.

Till Now Is Tomorrow finishes the album, a tense raw to the bone song that sees Mano at his most reflective, vocals allowed to linger to allow the meaning of the words to hit home or with layers placed under them to provide a lilting lift at points.

It closes the circle on an album that justifies all the praise that's been thrown at Mano over the years either as a solo artist or in bands like Meadow. Like the man himself, it's modest in its outlook, but that simply adds to the charm and makes it easy for the listener to immerse themselves as it's so free of pretense, false statements and compromising to fit a mould. With the aid of Tim on drums and Gary on bass, the songs are given extra life, but without smothering the songwriting ethos that is at the core of the record and which makes it and its creator such an endearing and unique character.

The album is launched with a show at the Castle Hotel in Manchester on Friday (March 5). Tickets are available here.

The album can be bought here.