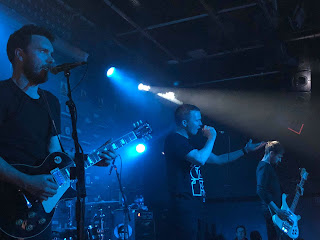 The Slow Readers Club made a triumphant return home on Thursday night from their gruelling thirty-two date tour around the UK with a sold out in minutes show at Manchester Gorilla. Covering all bases from their career so far they raced through a twenty-song set in front of an adoring audience that never once stopped bouncing. Support came from Liam Frost with songs from his recent Latchkey Kid album and an old favourite.

At first Liam finds it hard to silence the chattering crowds excited at seeing their heroes in such intimate surroundings, but a couple of songs in and you notice that people start to become captivated by these raw stripped down versions of songs from his new album. The likes of Going Steady and and Didn't It Rain possess different qualities without the band behind him and it feels strange to hear Pomona without the backing vocals that we find ourselves involuntarily adding but what shines through, as it always does whatever form Liam performs his song, is their craftmanship and quality and their ability to delve into human emotions and find the nub and core of the subject matter in question. 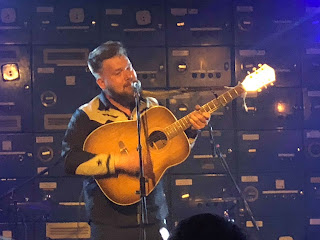 He's on good form, laughing at a time he had his zip open and comparing himself to Woody Goth, yet that's part of his modesty, that self-deprecation that plays down his rightful position at the pinnacle of songwriters out of Manchester in the last decade or so. The intensity of The Slow Knife and Smoke do that bidding for him and he finishes with what we consider one of the greatest songs ever to come out of this city, The Mourners Of St Pauls.

There's then an expectant half hour wait before the sound of Donna Summer's I Feel Love envelops the room and everyone knows what's coming next and explodes like a ticking timebomb as they start with Lunatic and six hundred or so arms aim skyward to mimic Aaron as he declares "Build a tower, hundred stories high." The Slow Readers Club are building something bigger right now though. Three and a half years ago they sold out this room to a growing hardcore and a lot of curious onlookers, tonight tickets were like gold dust and these songs mean everything to people in this room which makes it quite fitting that they've chosen to circle back. 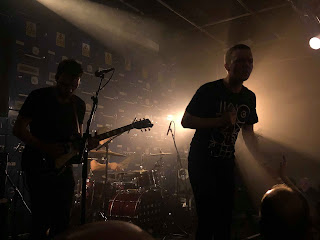 Their confidence is sky-high, their chemistry now so natural that five weeks on the road have rid them of any doubts that might still have lingered post their sold out Apollo headline in December that going full time was the right thing. Everything seems to be falling into place. The sound is possibly the best we've ever heard in Gorilla and the lighting perfectly captures the mood of the songs. The songs have grown with that, Fool For Your Philosophy and Lost Boys now sound like they're ready to fill academies and rather than it seeming like a pipe dream you'd bet your house on them getting to that level with the next album. The songs have that magical quality of feeling very much like a complete body of work without ever seeming like they're retreading old ground.

The older songs like Sirens, Feet On Fire and Block Out The Sun have become what those of us around at the time of their release believed they should have done. Those from Cavalcade - including that run of singles that one by one broke down walls for them in Forever In Your Debt, Start Again, I Saw A Ghost and Plant The Seed - are a celebration of them beating the odds and scaling the walls of the industry and radio and succeeding. The former is preceded by a thank you to everyone who's supported them along the way and is followed by the loudest READERS chant of the night. They're almost cast in shade by Grace Of God though, Cavalcade's great lost single, which makes a welcome return to the set.

Build A Tower had to be a great record to top those and the songs from it tonight show that they handled the pressure of expectation. You Opened Up My Heart is a huge soaring anthem with a message of hope that feels like it's been adopted as a way of living by this crowd that have found a band to believe in much in the same way this city's most celebrated bands did back in their time. Distant Memory shows a different side to them, one that they'll hopefully explore further, as they let loose at the end in a wall of noise. On The TV, which finishes off the night, is reprised first by the crowd and then by the band before they bid their farewells and if you'd just walked into the room you'd think there was some sort of religious ceremony going on. 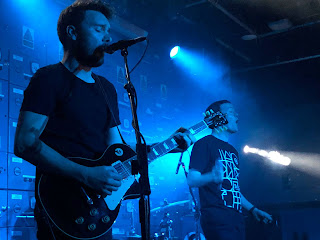 They also give us a taster of their recent recording sessions with The Wait. It shows a progression in their songwriting without losing what is right at the core of what has made The Slow Readers Club so beloved. It's main line "now you are here, you are all that matters" is such a simple statement, but one that draws people together. Half of the room already know it and sing it like an old favourite.

Whilst this was always going to be a banker home win for them in Manchester, tonight showed that their move to full time is paying off handsomely. They're doing the leg work now around the country and further afield in the next two months rather than resting on their laurels and playing guaranteed sell-outs in the big cities and that's brought them closer together, fitter and tighter and it feels like the momentum behind them is going to take quite some stopping now.