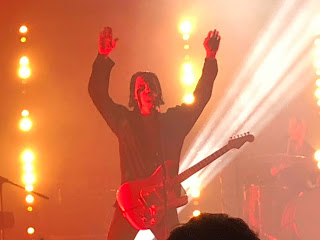 The Blinders' biggest headline show to date in their adopted home of Manchester on Saturday night proved to be their biggest triumph so far with a magnificently staged set, tracks from their debut album Columbia and an exciting signpost to where they're going next with some rapturously received new material. Topping off the night were support slots from two of the most highly-tipped bands around - The Ninth Wave and Working Men's Club.

It's already been a big week for Working Men's Club having announced the worst kept secret of their signing to legendary indie label Heavenly and this is a big stage and a big room for a band that's still in its formative stages with just one single under their belt but with a growing reputation. They have issues with the sound at the start of their set which means we struggle to hear Giulia singing the second song of their set at all. It's soon rectified though by the time they get to their debut single Bad Blood, lighting effects that have been mostly absent up to that point kick in, and you sense that the audience is being won over more and more as the set progresses. Equally impressive is a song seemingly aimed at the disposable nature of some of their contemporaries - "turned on my radio, Good God" - that has a razor-sharp edge lyrically and musically. 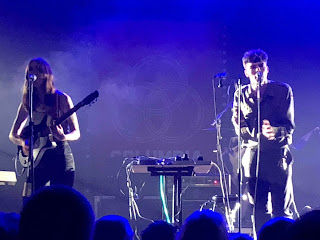 At points their music doesn't seem to follow any sort of song structure as if they're jamming to a backing track, but it's that unpredictable nature of their work that makes them so intriguing and thrilling to watch as they're blossoming as a band before our eyes. Sid might recall a young Mark E Smith or Ian Curtis in his mannerisms and at times in his vocal delivery but the dexterous fluid nature of their art means that it is simply a touchpoint rather than a cornerstone. Whether they achieve cult status or mainstream acclaim remains to be seen, but they seem to be taking every step up in their stride.

The Ninth Wave are an inspired choice as main support. The duo of Haydn and Amelia are expanded to a four-piece live and their songs and their sound are bold and enthralling enough to fill The Ritz as if it were their headline show. They infuse a real joy and energy into their performance too that's infectious and the crowd respond in kind. The set focuses on tracks from their debut album Infancy that's due in November - their last single Used To Be Yours, Sometimes The Silence Is Sweeter, Half Pure and Swallow Me are stand-outs in a set that starts with a bang and never lets up through the half hour they're on stage. 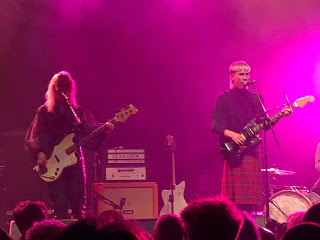 The pair feed off each other perfectly, a heady mix of rock and roll and ecstatic drama both in performance and in song. New single First Encounters is a case in point, a real uplifting track with a haunting electronic beat underpinning it whilst it builds to a huge soaring chorus where their two voices fuse together and complement each other wonderfully. They have most of the crowd eating out of the palms of their hands by the end, such is the impact they have on those here to see them and those like us seeing them for the first, but certainly not the last, time.

It is The Blinders' night though. This gig is close to twice the size of their previous biggest headline in Manchester, but this legendary venue is full with an expectant crowd waiting to pay homage to these unlikely heroes. The only minor hiccup is before they even make the stage as their intro tape which laments the mess politicians have made of society uses a declaration of the Brexit result and a minority cheer, completely missing the point. But as the tape concludes and the Columbia poem booms out around the room and the band make their entrance that's all forgotten.

Often a band can shrink in a big room, but tonight feels like a coming of age for The Blinders, a night when they create a notion of possibilities far in excess of what they've done before. Visually exciting without taking anything away from the music, their light show and backdrop is just perfect for what the three of them create on stage. Thomas slugs from a bottle of wine as air raid sirens bounce off the walls and they dispatch Brave New World and Gotta Get Through, the two songs that spread them to a wider audience, first up as if making the statement that they're about much more than being played on the radio. And they are. There's a real sense of community and union in the crowd, a mix of those needing false ID to get served at the bar and those that could probably pass as their grandparents, as The Ritz's infamous sprung dancefloor gets its toughest workout for quite some time.

These shows are effectively an end to the Columbia era, and what a send-off it was given as the likes of Rat In A Cage, Hate Song, Where No Man Comes and a spiteful bitter I Can't Breathe Blues send the throbbing mass of sweaty bodies into ecstasy as the air is punctuated by flying pint glasses that shower anyone in their path. L'Etat C'est Moi and Hate Song have a venom that's amplified by the surroundings, a vitriol and anger spewing from the stage at the state of the world and those that rule it. 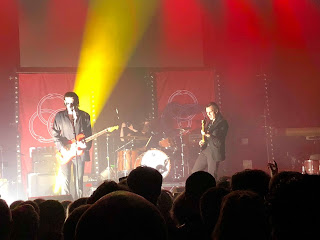 Over the past few years The Blinders have managed to distill their rightful anger into a message that doesn't take sides, but focuses on injustice and the power of the individual and the collective to change things for the better. When they slow things down, as they do on the gorgeous Ballad Of Winston Smith and the encore of Orbit (Salmon Of Alaska), that have people swooning at their ability to take their foot off the accelerator pedal and still have people transfixed by them, you sense that here is a band that have made an immensely powerful and transcendental connection with their audience that goes far beyond just the music.

They own this huge stage. Freed from the risk of taking out the front row with the head of his bass, Charlie acts as the agitator, the conductor at times, whilst Thomas demonstrates just how much he's grown as a front man, even as the black mask of the face paint melts in the sweltering heat revealing his own features and Matt, raised up centre stage, dictates the beat that drives the whole thing forwards. And speaking of forwards, two of the new songs they play tonight - Forty Days and Forty Nights and Lunatic With A Loaded Gun - blow any concerns about future direction out of the water. They retain the DNA of Columbia, but feel more expansive and ambitious in intent, buoyed by the response to that album and pushing the boundaries.

This is still though a celebration of Columbia, the progress they've made since leaving Doncaster, and they make sure they let everyone know that is where they are from, for the bright lights of Manchester and those scrappy early gigs where they had potential, but not the precision, power and focus that they have today without losing any of the excitement. As the duo of Et Tu and Brutus conclude the main set and Charlie points his bass at us like a loaded gun, the crowd draw on their reserves of energy to throw themselves around as they build to its wild climatic ending.

They finish the encore with the rarely played Swine, their debut single, which sends the audience into one last frenzy before they depart into the rainy Manchester night. In seventy minutes The Blinders delivered a set that exceeded wildest expectations - full of powerful emotionally charged moments where they converted all their ideas into a show that will go down as one of those nights that people will talk about in excited tones for years and years, a coming of age, a widening of horizons and a triumph of music that has meaning and a message to impart over the mundane and uninspiring.

The Blinders' website can be found here and they are on Facebook and Twitter. They play London Scala (30) before heading to Europe at Cologne MTC (May 7), Hamburg Molotow (8) and Berlin Cassiopeia (9).