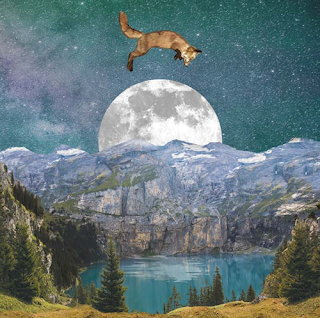 Dave Fidler’s second solo album Songs From Aurora is a significant progression from his debut I’m Not Here. Eschewing the reel-to-reel recording methods and stripped-back solo approach of the debut for something deeper, richer and more varied in tone, it’s a record that sees him blossoming out, discovering himself musically and delivering a record that is set to charm anyone lucky enough to cross its path.

The album opens with On The Line, a song whose opening resembles a bright summer’s day and life on the road, quite apt given most of the album was written during a month-long roadtrip in Dave’s caravan Aurora. Whilst there’s more instrumentation on this record than the debut, what’s immediately clear is that the record’s production still allows every little detail to be heard, whether be in the guitar or the evocative nature of Dave’s voice.

Eternal Road starts with a mouth organ that gives a longing meandering wistful feel to the song, one that runs throughout it. It’s a theme that runs through much of Songs From Aurora and one that allows the songs to wrap themselves around the listener like a comfort blanket. Songs are personal, either to Dave or people who’ve crossed his path - “your hands were made for working and that’s just what you did, head down, raised such a strong woman from a scared little kid” - which means that they’re relatable in a very simple way.

Heart Of Stone is one of the few songs on the album that came from before the month-long caravan journey. It comes from Dave’s trip with his wife to Haiti and meeting a woman who’d been imprisoned and it tells her story with a real sense of empathy. The sadness in the story provides an interesting counter to the upbeat nature of the music.

The album’s lead single Skylark is a little more claustrophobic in its approach in the verse, an intensity that serves the song well as it builds, harmonies and backing vocals kicking in over the chorus and as the song progresses to add a richness and a bruised romanticism to its message “the skylark only calls when it’s climbing, the road has been a little rough but I’m still moving.”

Those harmonies also provide an uplifting feel to The Water, as the guitars and pedal steel work their magic and allow the rich redolent tones of Dave’s voice to come to the fore. We’re only five songs in, but we’re struck by the variety of the record so far whilst still feeling like it’s a natural process, laid down as close to creation as possible capturing that magic of newness before songs get overthought.

Another Word For Home slows things down a little and sees Dave in introverted reflective mood, as he ponders “me, you, looking for the missing places” before declaring with an emotional understated emphasis that “you capture me before I fall to piece, you’re my only word for home.” It’s a very personal song, but one that outsiders can take and relate to their own situation, an impact that Dave has developed a real ability to create across his two records and why the songs build strong emotional connections.

Let Her Go is another older song that will be familiar to those who’ve seen Dave’s live shows. The chorus message is unequivocal in its advice “if you love her let her go” whilst vocal harmonies help again to lift the song and give depth and remorse to the line “love, I’m sorry for hurting you” as the guitars work their magic across the otherwise sparse musical canvas of the song.

Sum Of Days is even more contemplative, musing “leave me be, the heart’s a mystery to anybody” on the complexities of life. It does however end in a positive message, and Songs From Aurora does ultimately celebrate the good things in life amongst all the rubbish, that you shouldn’t look backwards but forwards “love, this day is over, never to be lived again.”

That said, the mood and the style of the record takes an unexpected turn on Will I Ever Learn? It’s steeped in blues tradition, just Dave and a guitar for the most part, a reflective edge to the lyrics plunging into the darkest recesses of the mind as he declares “told everybody to take it slow and then jumped head first out of that open window.” It sounds like nothing he’s done before, but it might just be the best thing on the record.

For You returns to more familiar ground, a positive outlook and an arm round the shoulder of someone going through a hard time in life “hopeful is how I will remain, looking forward to a better day, for you” whilst Breeze has a similar warmth and positivity running through it. With the risk of sounding repetitive, there’s something about Dave’s lyrics, both on I’m Not Here and more so across the twelve songs of Songs From Aurora, that deal in emotions and matters of the heart and mind rather than the bland and meaningless glib statements.

The album finishes with Home, a beautiful eulogy to Dave’s father, set to a funereal yet somehow reassuring piano and with the vocals lifted and the song’s sad subject matter softened by harmonies in just the right places. By the time the song comes to its end, everything stripped away other “I’m home” repeated over a single piano note, it’s almost not impossible to have something in your eye as the song is so raw and soul-bearing.

Songs From Aurora is an impressive varied piece of work, one that takes the songwriting template of I’m Not Here and fleshes it out, paints it in colour and covers it in a rich emotional tapestry that’s both evocative and honest in the situations it describes. It does so without wallowing in self-pity or pathos, instead encouraging people to focus on the positives, look to the future and learn the lessons and remember the good things from the past. It’s also easy, like its predecessor, to immerse yourself into despite the sometimes difficult subject matters and relate them to your own life and hopefully find solace, advice or solutions.

Our interview with Dave can be found here.