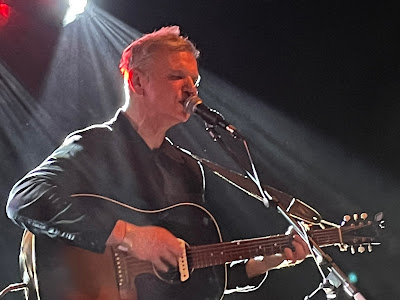 Postponed almost two years from its original date in April 2020, Sunday night finally saw Cherry Ghost play an extremely rare live show at Hebden Bridge Trades Club with a set spanning their three albums to date to an awe-struck reverent audience. Support came from a solo set from Liam Frost making his Trades Club debut.
Liam Frost's solo outings are not quite as rare as Cherry Ghost's but it's a rare pleasure to see him out performing again as he plots his return ahead of two shows at Halle St Michael's in Manchester at the end of the month. His set takes heavily from his last album The Latchkey Kid as well as a couple of new songs he's been writing whilst keeping his head down for the last few years. He's in the difficult position of not wanting to rest on the laurels of his 2006 debut Show Me How The Spectres Dance, in our opinion, and in that of a small but not insignificant population, one of the finest records to come out of Manchester this century and push the label forward with new material.
Two of those new songs - In Chrysalis, released under his Fountainhead pseudonym last year, and You Held My Love With You - are beautifully intense and claustrophobic, being played to zero audience chatter with just the clatter of glasses at the back of the room giving them an even more lived-in feel. The four tracks from The Latchkey Kid - Smoke, The Slow Knife with an achingly wistful mouth organ, When I'm Alone and Who's Gonna Love You - are stripped down by necessity from the recorded versions and this reveals the dark raw emotions of the song into even clearer sight. You can hear the pain, insecurity and uncertainty seeping out of every note and word. It demands full attention and it gets it. 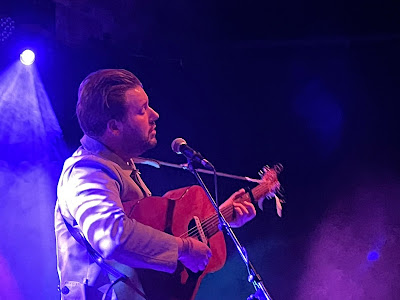 He finishes with two "really old songs" from Spectres - If Tonight We Could Only Sleep and The Mourners Of St Paul's - and a quick glance round the room sees people eyes closed mouthing the words to them. He introduces Mourners as a "death knell to sense and democracy" and fifteen years on it never fails to catch the heartstrings and bring a tear to our eyes in the way only truly special songs can.
He's on good form too, joking about wearing a coat on stage after eating the venue's excellent Chicken Rendang, introducing himself to a member of the audience and enquiring where he came from before checking he wasn't being sarcastic and generally charming the audience in his own inimitable manner. Hopefully the St Michael's shows and the new material aired tonight means we'll be seeing more of Mr Frost in future, because his music makes the world feel a better and more comprehensible place.
The sense of anticipation in the room for Cherry Ghost though is palpable. Live shows are so few and far between as Simon has understandably said regularly that he doesn't want to go out and tour without having new material to perform. As he's now busy doing co-writes for the likes of Liam Gallagher, and keyboardist Christian has hot-footed it up to Hebden Bridge from London where he's been rehearsing with Liam, it's unsurprising that there isn't any new material tonight, although he does tell us that it is "high time", not that anyone in the room is complaining, they're just delighted to have the opportunity to see him at all and, of course, it makes more space for all the old favourites that they know and love and mouth along to every single word of.
The set up is simple. Simon with a guitar and mic and Christian with two sets of keyboards, yet it's all that is needed for the sheer beauty of the songs to shine through. Delivered with an absolute minimum of fuss the focus is solely on the timeless magnificence of tracks from Cherry Ghost's three albums - 2007's Thirst For Romance, 2010's Beneath This Burning Shoreline and 2014's Herd Runners as well as well as opening with a stripped back version of electronic project Out Cold’s Sorrow and including a rare b-side Please Come Home in the encore. Simon's vocals have become richer and stronger with time, the sense that these songs have been lived in and through is very clear and apparent in the way they're delivered without bombast but with a modesty that makes the words even more affecting, accentuated by the close musical understanding he has with Christian and which Christian has with the songs. 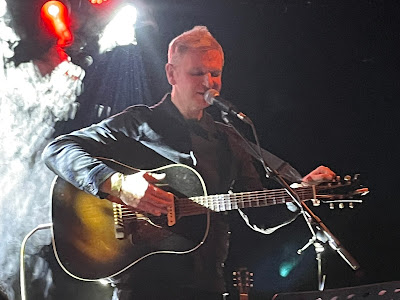 There's a real unassuming modesty at play that makes the music and words even more affecting. At the end of opening track Sorrow, Simon tells us "I had to revisit a lot of these songs, download a lot of lyrics and do a lot of listening to remind myself, and for the most part it was nice to find it was mostly good and not that shit" seemingly unaware of the life-affirming qualities of these songs to much of tonight's audience. He takes the piss out of himself for becoming someone who needs a music stand, laughs at the showbiz nature of the audience singing back to him on People Help The People and Mathematics. He's concerned that his mum is at the back of the room in case we think he's told her to stand there and half way through he recognises a shout from the crowd as one of his aunts.
Like Liam before him, Cherry Ghost may not have reached the heady heights they deserved to, but those fortunate to have crossed paths fall under the spell of not just the majestic wonderfulness of the likes of singles People Help The People, Thirst For Romance and Mathematics but the lesser-acclaimed tracks such as Herd Runners' title track, My God Betrays and Fragile Reign. Not once during the set does it feel like a song is letting the side down, the quality never falters, the battered bruised romanticism sitting on the surface of songs that feel both simple in their construction yet with a meticulous attention to the impact of melody and structure on the listener.
The only dissent is when after an hour Simon tells us the set is drawing to a close. By the list of requests being shouted out the show could have lasted three times as long until everyone was satisfied, but he laughs them off with their lack of rehearsal time because of other commitments before being stopped in his tracks by a shout for Wonderwall. There is an encore - although he once again is self-deprecating, laughing at the lack of a big rock and roll moment - but that's not where the appeal of Cherry Ghost lies. As the final notes of Drinking For Two draw to a close, the roar of appreciation for one of the country's greatest yet most unassuming songwriters is almost deafening. A Cherry Ghost show might not come along too often, but they're absolutely enthralling and unmissable when they do.
Cherry Ghost played Sorrow, 4am, Sacramento, My God Betrays, Thirst For Romance, False Alarm, Kissing Strangers, Herd Runners, Fragile Reign, People Help The People, Mathematics, Dead Man's Suit, All I'm Dreaming Of, Please Come Home and Drinking For Two.
Cherry Ghost's website can be found here, they are also on Facebook and Twitter.