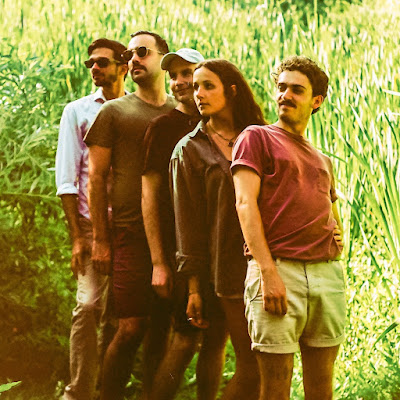 Vancouver's Sugarfungus formed during lockdown and recently released their debut EP Letting Go, Moving Still, six songs of addictive glorious electronic dream-pop tinged with a hint of melancholy. We caught up with them for a chat to find out more about them, the songs on the EP and their plans.

Could you introduce the members of Sugarfungus please?

How did you get together as a band?

We came together as friends for a songwriting challenge that we would hold on Zoom on Sundays during lockdowns in 2020/2021. We would each present and discuss a song idea. Then we’d collaborate and add onto each other's ideas until we had complete demos. We realised we have similar artistic visions and wanted to release the songs that would make Letting Go, Moving Still.

The name SUGARFUNGUS comes from the anglicised translation of Saccharomyces yeast, which Jackson and Alex both study for their PhDs at the University of British Columbia. We joked that that would be a cool funk band name early on and it was weird enough to kind of stick.

What difficulties did you have forming the relationships critical to a band coming together during the pandemic when you couldn't just get into a room and play together in the traditional way?

Some of the more difficult instances were inviting Ivan and Tess to the band. Bradan was friends with them but Alex and Jackson hadn’t met/heard either of them before, so we interviewed them over Zoom and sent them some of our demos to see what they would come up with. We had finalised our lineup in January 2021, and would meet once a week over Zoom to share ideas, but we didn’t meet in person as a full band until July.

How did that impact on your songwriting - would one of you present songs to the band or was it a more collaborative approach despite the constraints?

It was a mostly collaborative approach. One of us would present an idea; whether it be a riff, lyrics, or a fully fleshed out demo, upload it to the cloud, and the rest of us would take that and record our ideas overtop.

Has that changed in recent times or are you still working together remotely?

We now have regular rehearsals in person, but we still record and share ideas in a similar way as before. The nice thing now is that we can jam out the ideas in real time to see if they work.

Have you managed to play live yet - and what plans do you have to supporting the EP?

Could you tell us a little about the songs on Letting Go, Moving Still?

Catch & Release is a rainy walk home after saying goodbye to someone you’ve tried to be with but simply have never been in the right place or the right time. It’s falling for someone early on, but having them move away shortly after.

Retrospect laments a missed opportunity of love, reminiscing on a euphoric state despite feelings of deep regret. The lyrics describe “a broken mortal art… a broken bleeding heart” as someone who, in all of their allure, was impossible to pin down – impossible to win over.

What's A Used One Worth?

You know the saying ‘time heals all wounds’? Well sometimes you’re still bitter whether you’d like to admit it or not before those wounds can heal. It’s prime –winning past arguments in the shower– time.

This song is about social anxiety. It’s going to a party but talking to the dog more than people. If you’re not doing that, you’re acting like someone else and feeling kinda hollow.

Contagious love is the unease of navigating romantic relationships over the past two years.

Play Dead is a song about nostalgia particularly on Halloween. You have this date every year but the context surrounding it and your behaviour changes as you get older.  The lyrics are a bit surreal.

Are there any plans for a physical release of the EP?

We’re still evaluating if that’s the right move for us and how many people are interested in a physical copy from us.

What are your plans to follow up the EP?  Do you have a set of songs written and recorded for future releases given the time since you formed?

Yes, we have a follow up in the works and we’re already recording new songs. You’ll hear from us again soon!

You're currently based in Vancouver, could you recommend any other bands from the city that we should check out?

Club Sofa & Dante’s Paradise are super cool. You should check them out!

How would you describe Sugarfungus to someone who had never listened to you before?

Sugarfungus are on Facebook. The EP is available from their Bandcamp.

Email ThisBlogThis!Share to TwitterShare to FacebookShare to Pinterest
Labels: Sugarfungus