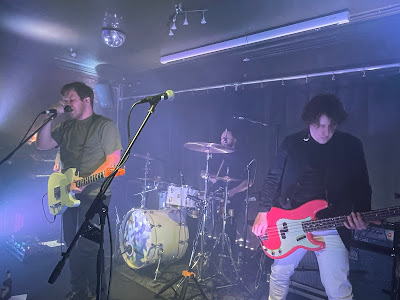 Ist Ist played the first of two extremely intimate Independent Venue Week shows at Manchester's 33 Oldham Street venue on Tuesday night. Tickets sold out in seconds for both shows when they were put on sale so there was a real sense of anticipation for a band playing to a tenth of the audience of their recent Manchester headline shows and they didn't disappoint with a twenty-song set that went all the way back to their debut single and forward to an unreleased track they're working on for their third album.
In an ideal world Ist Ist would be out on tour now, but with full-time jobs and the risk of one positive COVID test halting them in their tracks away from home has meant, like many others, a more risk-averse approach for musicians to the rest of society. We need live music, but we also don't need musicians putting themselves in a financial hole providing it to us. On a roll though after their hugely successful tour before Christmas before Omnicron was a thing, where they sold out circuit venues across the country, the desire to get their hit of the live buzz saw them announce first one then a second show at 33 Oldham Street, one of Manchester's newer venues after the first sold out instantly.
Tonight's set takes us on a journey through their work to date. Debut single Night's Arm is steadfastly refusing to be shifted, whilst Emily, from their debut Spinning Rooms EP, sits alongside its compatriots Preacher's Warning and I'm Not Here early in the set. These four songs have grown with the band, expanded with the addition of Mat, and feel even more potent and powerful around the big hitters from the two albums.
The bulk of the set naturally comes from their two albums to date - Architecture and The Art Of Lying in a confined space with a powerful PA that threatens to deafen anyone in the room but which still manages to convey the complex detail in these songs from Mat's keys, Joel's drums and Andy's bass as well as the raw emotional punches to the gut of Adam's vocals as he loses himself in the music, oblivious to the fact he's in a room full of people with their sight trained on him. The lack of the blistering light show that accompanied their recent Academy show might make this less of a visual spectacle, but it focuses the mind on the music. 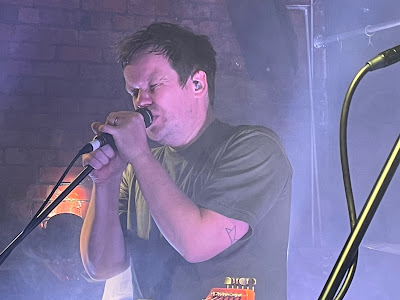 That's where Ist Ist have developed a real mastery and control and no more so than in the live environment. Songs like Preacher's Warning, New Love Song, Listening Through The Walls and the electro-waltz of Head On Spikes brim with an electric tension that's gripping and enthralling. When they let loose, such as on the second half of the standout The Waves or the jagged urgency of If It Tastes Like Wine the songs have an intoxicating all-consuming lift to them. They also have the more traditional radio-friendly tracks such as You're Mine, Discipline, Extreme Greed and Black that tip their hat to their influences but remain steadfastly true to the unique Ist Ist DNA. There's even space for a new song, Fools Paradise, which sees Andy take on vocals in the chorus and feels like it's exploring the outer boundaries of their sound as the songs from The Art Of Lying did when they redefined those boundaries.
You're Mine is loved so much that a bloke shouts for it even after it's already been played. Andy entertains playing it again as the bloke claims it's his birthday. Joel tells him he'll have to come the second night, whilst Adam's refusal is a bit more blunt, but laced with humour as he holds up the setlist to show it's already been played then changes the opening line of Black to "I won't play You're Mine for you again" before blowing him a kiss. At one point the bloke moves towards the stage as they start the final song Slowly We Escape, but thinks better of making a scene. Wise. 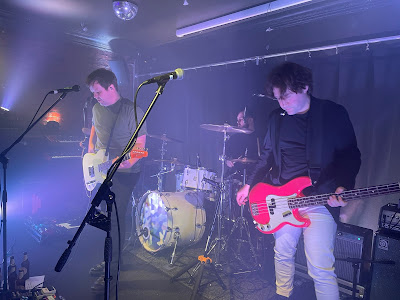 It's testament to how far Ist Ist have come that these two shows have the feeling of being something special as their audience continues to expand. Many of those in the room tonight have been there since the start or have become devotees along the line, forming a growing hardcore fanbase that eulogise them to anyone who'll listen. 2022 will see them increase that further, spread their wings nationally and internationally and work on album three. They're now becoming a big deal, just how big we'll have to wait and watch.
Ist Ist played Wolves, You're Mine, Watching You Watching Me, Fat Cats Drown In Milk, Emily, Preacher's Warning, I'm Not Here, Discipline, The Waves, Middle Distance, New Love Song, It Stops Where It Starts, If It Tastes Like Wine, Night's Arm, Fools Paradise, Heads On Spikes, Extreme Greed, Listening Through The Walls, Black and Slowly We Escape