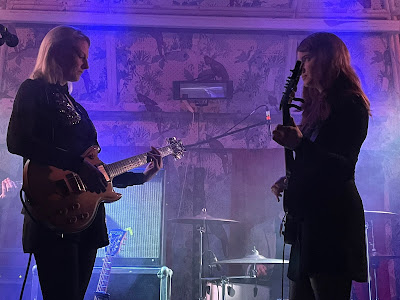 Smoke Fairies brought their first tour in two years to Manchester's Deaf Institute on Saturday night with a set leaning heavily on 2020's Darkness Brings The Wonders Home album. Support came from a stripped-down Samana.
Samana usually perform as a five-piece but for these shows they're playing as a trio without a rhythm section, just guitar, keyboards and vocals. The core duo of Rebecca and Franklin are present and correct though and the essence of this project is very much apparent as their half-hour set, performed barefooted, feels like a spiritual journey full of drama and passion. Vocal harmonies from the guys augment the centrepiece which is Rebecca's showstopping voice that stops you in your tracks and draws you in. That intensity is replicated in the visuals as the three of them are absolutely lost in the moment of their art. 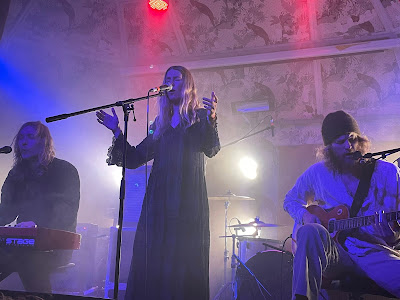 They play.a mix of songs from their Ascension debut album and its follow-up All One Breath that is released next month including its lead single Patience which is augmented by an instrumental section that recalls Chris Isaak's Wicked Game. They finish with last year's lead EP track Live For The Road, which Rebecca describes as a mantra to be repeated and joined in with. It's a statement that encapsulates what Samana are about and stand for - a means of escape through music that shuts everything else out and focuses on the mind and soul.
It's fifteen years since Smoke Fairies emerged on the scene and testament to their belief in their art that they're still making music that matters to them and to the crowd of disciples that have gathered in the Deaf Institute's music room, the perfect setting for them in many ways. The vocal interplay between Katherine and Jessica is at the centre of each of the fourteen songs they perform, whether it be one taking the lead and the other providing backing vocals or, and for us when they're at their most potent, where the two combine and the songs are given a lift.
The great thing about a band that has been together for so long is that they take you on a journey of their own musical evolution. There's moments of the softer folk melodies that characterised their early work and you can map their evolution through the course of their albums which are all represented here to the potent more direct band that they are today, augmented live by John J Presley on bass and Sean Fallowfield on drums. The power isn't a blow-your-head-off one, it's more subtle, building through the set, but it's impossible to not be drawn in. 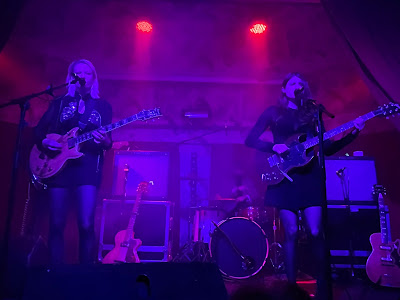 There's a sense that they'd still rather be playing the music and not have to do to the chatting between songs. A couple of vocal audience members don't necessarily help matters as a simple statement about being happy to be back in Manchester ends up going via Wigan, pies and Jessica reminding Katherine that she threw a banana into the crowd last time they were here.
Sunshine sees Katherine perform one of a number of outstanding guitar solos with her back to us but Jessica makes sure her band mate gets the acclaim it deserves at the end of the song. Darkness Brings The Wonder Home's lead single Elevator appears mid-set, described by Katherine as "my thoughts on Valentine's Day" to which Jessica replies that all the songs are.
The encore is just Jessica and Katherine and they perform Film Reel, which they have to restart as Jessica's guitar lead falls out and a magical River Song that goes back to their very early days. They stand at one point facing each other and a small smile cracks on both their faces. It's a rare show of emotion, Smoke Fairies very much let their music do their talking and bidding for them and that is more impactful now than it's ever been as they sign off this phase of the band and leave us awaiting their next moves.
Smoke Fairies played Super Tremelo, Don't You Want To Spiral Out Of Control, Coffee Shop Blues, Sunshine, Eclipse Them All, Out Of The Woods, Summer Fades, Elevator, Left To Roll, Shadow Inversions, Disconnect, The Three Of Us, Film Reel and River Song.
Smoke Fairies' website can be found here are on Facebook and Twitter. They play London Lafayette (February 15) and Southampton Joiners (16).
Samana's website can be found here and they are on Facebook and Twitter. They tour All One Breath at Bristol Crofter's Rights (March 21), Manchester Gullivers (22), London Paper Dress Vintage (23), Brighton The Brunswick (24), Margate Elsewhere (25) and Faversham The Hot Tin (26).
________________________________
Follow Even The Stars on Twitter at @eventhestarsuk and like our Facebook page for all the latest updates
Posted by Even The Stars at 10:29