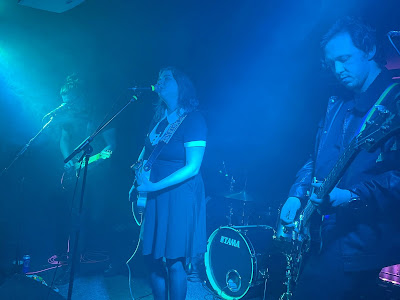 Sprints played their first date of 2022 in the smoky basement of Manchester's Yes on Thursday night, the opening show on their UK and Irish tour in support of their forthcoming second EP A Modern Job. An enthusiastic crowd were drawn in by the infectious energy emanating from the stage as Sprints' no holds barred approach to their art continued their seemingly unstoppable rise. 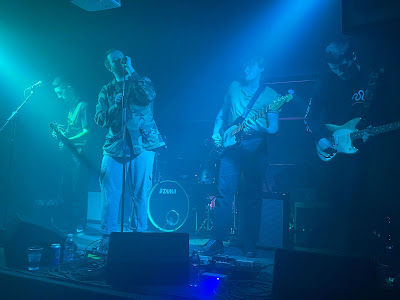 DEAFDEAFDEAF open up the evening and the five-piece deliver their own brand of accessible post-punk including recent singles Nothingness and City Song. Made for dark smoky (and hell there's a ridiculous amount of smoke machine in the room tonight) basements like this. Their songs are heavy and claustrophobic with Nathan's dark intense vocals the perfect foil for the wall of guitars and tight rhythm session that swirl around it and the crowd respond well to them. Singles City Song and Nothingness are highlights in a seven song set that features a couple of new tracks in amongst the already released material. There's a lot of bands currently making music like this, but DEAFDEAFDEAF stamp enough of their own personalities on it to stand out.
After their sold out show at The Castle across town back in October, we were surprised that Sprints' next show wasn't in a much bigger room than this, the capacity of the Yes Basement being not much greater. However with the sold-out signs once again on the door that's immediately forgotten as they take to the stage and deliver a fifty-minute twelve song set that includes both their Manifesto and A Modern Job EPs in full, early single The Cheek, an unreleased track Heavy and an encore, including Natalie from Loose Articles who's brought out of the crowd, of Wet Leg's Chaise Longue.
It's impossible not to be drawn in by the sheer energy of their performance, whether you be the young women down the front singing every word or the older of tooth around the fringes who feel the spirit of Sprints' unadulterated punk ethic that's missing from so many bands that dilute themselves in search of wider appeal. Sprints show that you don't have to do that and right from the opening bars of Drones that energy transmits from stage to crowd and amplifies back. 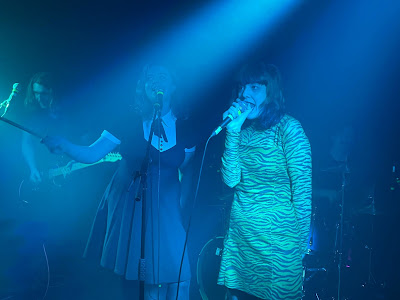 The raw propulsive energy that runs through the set in the songs that are unfamiliar still (but not for long) to the crowd as much as the Manifesto songs that are sung back verbatim is contagious. Karla is their leader, immersed in the moment, the release of her words etched across her face as she delivers them either on stage or down amongst us, but Sprints are very much a band of friends, the knowing glances, the resting of heads on shoulders, the vocal interactions between her and Sam and the intuitive feel that these songs have all adding to the sense of community and togetherness between them and which extends to us.
They're fun too, the beaming smiles across Karla's face as she addresses the audience, demanding their friends at the back put their hands up, and their tongue-in-cheek but blistering cover of Wet Leg's Chaise Longue that forms their encore with Natalie from Loose Articles brought up to duet with her on it. They're clearly at home on stage, their natural charm endears them to the audience if the music somehow doesn't do that already and there's a real joy to being in the crowd watching them. With an album in the offing, if Karla's introduction to Heavy was heard right, then Sprints are only just starting. Those bigger rooms we thought they should have gone to will definitely be next on their journey.
Sprints played Drones, Swimming, Ashley, Heavy, Manifesto, A Modern Job, Delia Smith, I'm In A Band, The Cheek, Little Fix, How Does The Story Go and Chaise Longue.
Sprints' website can be found here and they are on Facebook and Twitter
They play Leicester Soundhouse (February 25), Cambridge Blue Moon (26), Brighton Hope And Ruin (28), Bristol Strange Brew (March 1), London Moth Club (2), Dublin Whelans (4, with Yard Act), Belfast Ulster Sports Club (6) and Dublin The Grand Social (10).
DEAFDEAFDEAF are on Facebook and Twitter.
________________________________
Follow Even The Stars on Twitter at @eventhestarsuk and like our Facebook page for all the latest updates
Posted by Even The Stars at 07:30