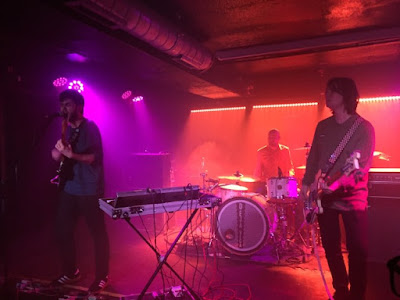 Déjà Vega are on a roll. The night after their biggest ever headline show at Manchester Gorilla, the band make their way north to play their inaugural Scottish show. Stuart Ralston went home for the evening and, like the rest of the audience, was blown away.
Déjà Vega are in town to promote their second album Personal Hell. At the end of a busy week for the band and only hours since playing their biggest headline gig to a sold-out Manchester crowd, you’d forgive the band if they were a little bit jaded. There’s no chance of that though and before they even strike the first notes of It’s All Gone Wrong, guitarist and vocalist Jack is clearly fired up.
It’s All Gone Wrong’s opening synths sound like there’s an evacuation about to take place before Tom and Mike come firing in. This high-octane opening is the perfect introduction and from here on in, there’s no let up in the 70 minute set which is drawn heavily from new album Personal Hell. There’s no difficult-second-album-syndrome from Déjà Vega. Personal Hell builds and expands on the self-titled debut and sounds magnificent in the live environment.
Spitting Gas sounds like a theme tune for a Marvel Comic superhero before the Kraut-rock infused Harmonia takes over. For a three piece, Déjà Vega make an incredible sound. Jack creates a magnificent array of sounds via his fx, sampler and synth racks. The “disco rock” of Chasing shifts the style once more. 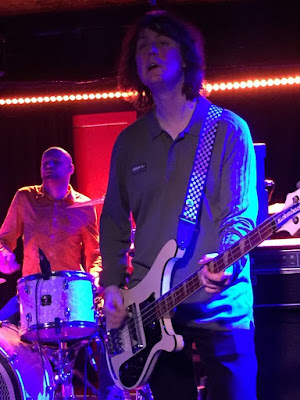 Slow & Steady veers towards jazz and you can almost see Deja Vega play storming sets in jazz clubs before they ramp up another gear with the dance infused psych rock of Banshee. The band could easily draw Slow & Steady out into an extended improvised jam, but it stops after just 4 minutes; the potential is there for much more though. You can feel the audience reaction building after each and every song. Banshee visits territories previously occupied by The Lucid Dream and is a real departure for Deja Vega. It gets the best response of the night from Glasgow’s enthusiastic crowd so far although the reaction to Who We Are tops that - the audience clearly love Jack’s use of the cowbells.
Balancing Act is another tune that they could stretch out to epic proportions and yet another hit with the crowd. It’s easy to see why Déjà Vega are so loved and celebrated on this form. There’s an incredible chemistry and intuition from the three members. First and foremost, they make this magnificent music for themselves but are attracting an ever-growing army of fans such is the intense yet uplifting sounds they conjure up. The intensity only increases as the set draws to a close. Penultimate track Eyes of Steel turns it up another notch. Jack is truly in his element, owning the stage and commanding your attention. Mike’s dynamic bass lines and big whilst out the back Tom creates a massive sound to hold it all together and drive Eyes Of Steel along.
An epic twelve minute The Test is dedicated to superfan Cami who has flown all the way from Utah to catch their shows this week. The Test crams more into one tune than lesser bands can cram in a career. As the set ends, there’s an air of euphoria from band and audience alike, followed by a healthy queue at the merch desk and much talk about when Déjà Vega visit Glasgow again.