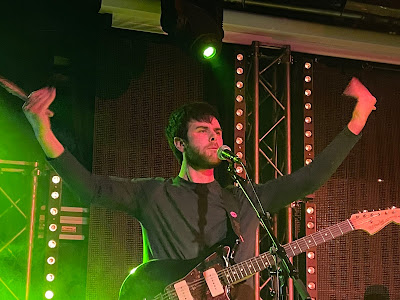 Déjà Vega's much-delayed tour to support the much-delayed release of their second album Personal Hell called in at Manchester Gorilla on Saturday night for a triumphant sort-of-homecoming show in front of a fevered crowd drawn in by the cathartic majesty of a band that had always been seen as an underdog but who are now filling venues across the country.
The Zangwills open up proceedings and the five-piece give a good account of themselves in front of a growing crowd that give them a warm reception as they deliver a half-hour set of seven songs that acts as a singles collection with Could I, 212, Horrors Of Sobriety, last year's Never Looked Back and Judas On The Dancefloor taken from their releases to date sitting alongside their forthcoming single The Feeling and an unreleased track with the wonderful title of Lucifer Is Making Me Dance. 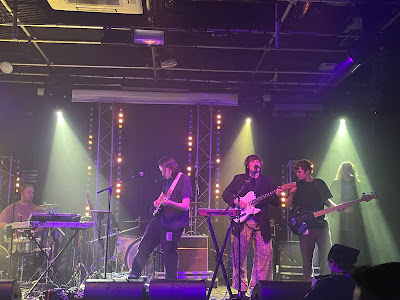 Augmented to a five-piece with a female backing vocalist that provides a great contrast to Jake's vocals and gives the songs extra lift and takes them out of the "four lads in a band" territory that it's easy to fall into, it shows The Zangwills understand that the need to stand out from the crowd. They've got a fan base of their own who fill the first few rows for their set who know every word to all these songs including the unreleased ones and they play the set like it's their own headline, unfazed by the size of the room and audience. They've been around for a few years now and their next aim must be to get to being the top name on the bill in spaces like this.
It's been a long hard slog for Déjà Vega to get to this point, having spent what seems like an eternity playing on the undercard of bills across the North West, but particularly in Manchester where, although they hail from Winsford and have an army that's here from there tonight to support them, they've sort of found a spiritual home musically. Where once we'd know everyone in the crowd in cramped spaces like The Castle, Peer Hat and Aatma, we look around tonight and recognise that same couple of dozen faces who followed them when they were still Deadbeat Echoes and little more than that. With growing audiences and sold-out signs across the country in circuit venues, it finally feels like they're getting the reward for their hard slog and their unswerving belief in what they do. 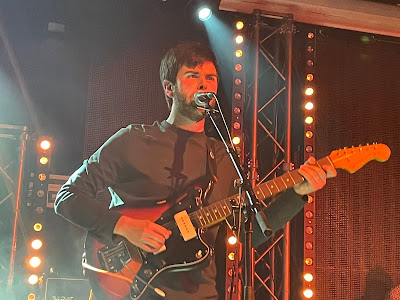 They wowed a bigger crowd across the road at The Ritz last August when they stole the show at the one day event celebrating one of their biggest champions John Hall, who they play quiet tribute to by having a picture of attached to one of their amps, before he was taken from us. John would be looking down, probably slightly appalled at the crowd's poor attempt at the "DEJA" "VEGA" call and response chant, but reveling in the chaos of the moshpit and Jack's crowdsurfing during the final twenty minute monolith of their traditional set-closer The Test.
Their set takes heavily from their recently released second album Personal Hell, a record that takes the thrilling headrush of their self-titled debut and adds to it the light and shade and subtlety whilst retaining the blunt punch to the gut that sets the crowd going from the very first bars of Personal Hell's opener It's All Gone Wrong to the final melee of The Test.
Old favourites from the debut - Mr Powder, Chasing ("we're going to play you some disco") and Eyes Of Steel are more powerful, bolstered by the confidence that comes from having 600 people in front of you losing themselves completely in what they're doing and needing to step up to not be overwhelmed by the power of the new. 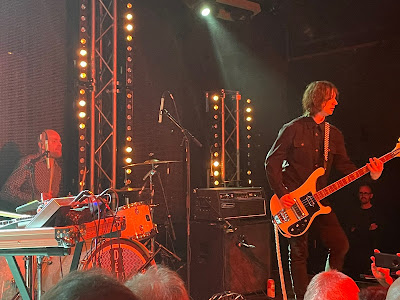 The songs from Personal Hell make up a significant chunk of the middle section of the set - the gorgeous grooves of Slow And Steady, the more experimental and explorative synth-laden Banshee and Catharsis and the bludgeoning rawness of the album's final track Outside Now. The two singles Spitting Gas and Who We Are, released way back in 2020 when the album was originally due for release and this show was originally scheduled for Club Academy, might be more familiar but here they pack a punch even more powerful than they did at their last headline in the city back in February 2020.
Visually, Jack is the focal point, a man lost in the music, feeding off the energy in the room, a manic grin appearing on his face as he surveys the heaving carnage ensuing in front of him. But Déjà Vega are about much more than their front man. The rhythm section of Mike on bass and Tom on drums is every bit as critical to their sound, the fluid yet rock solid base for everything about this band. In the moments when everything stops and drops down to just the two of them, the primal underpinnings of this phenomenal wall of sound are revealed as is the intuitive nature of the relationship between the three of them that comes from three best mates forming a band and living for it for going on a decade now. 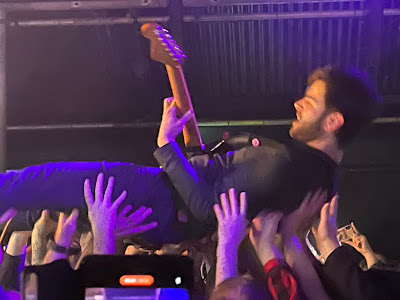 They finish with The Test, all twenty two glorious minutes of it, a song with more ideas live than most bands possess in a career, every time different, pushing the boundaries, one minute tearing the head off anyone within a mile radius, the next stripped down to just bass and drums with Jack at the helm directing operations, one minute twisting new sounds out of his synths and pedals, the next in the audience with a drum pad as it parts for him like the Red Sea. As it crashes to its conclusion, he's left on stage as Mike and Tom depart, not wanting to leave, vocal effects reverberating around the room as he looks for anything to create a new sound from.
Tonight is a genuine triumph, a culmination of a decade's hard slog in the underground scene finally getting its place in the sun. Whilst other parts of the city revel in the nostalgia of past scenes, Déjà Vega are part of a growing list of bands emerging from the small venues that are the vibrant beating heart of the current Manchester music scene following the path that The Slow Readers Club showed could still be trodden and others are following.
This was their night though, a celebration, a coming of age and a statement. Yet it also feels like a stepping stone to bigger things as evidenced by the sold out signs that got placed on the door and the growing crowds elsewhere on the tour. We fully expect them to be across the road in The Ritz the next time they come around.
Déjà Vega played It's All Gone Wrong, Mr Powder, Spitting Gas, Harmonia, Chasing, Slow And Steady, Banshee, Catharsis, Who We Are, Balancing Act, Outside Now, Eyes Of Steel and The Test.

Email ThisBlogThis!Share to TwitterShare to FacebookShare to Pinterest
Labels: Déjà Vega, The Zangwills