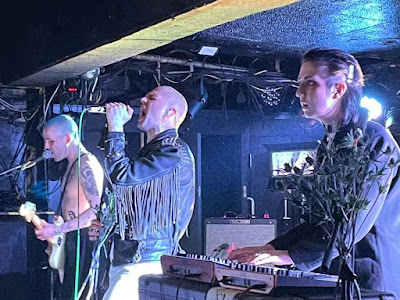 Delayed from December, VLURE's triumphant end-of-tour homecoming at Glasgow's King Tut's Wah Wah Hut was the hottest ticket in town on Friday night. Coming home with the release of their debut EP Euphoria in their back pocket and about to embark on a tour across bigger halls supporting White Lies, this was a celebration amongst friends of a band that's destined for greatness.
Tuts is absolutely rammed, the busiest we've ever seen it as VLURE's tour manager Euan Pennycook delivers his Sexy Leather Jacket Shaggers Crew poem in honour of the band. It's bellowed back word for word with its references to the songs from VLURE's Euphoria EP before the drums and synths of opening track Desire kick in and the floor is turned into one heaving mass of bodies for forty minutes.
Whilst their front man Hamish, who slowly strips off layers of clothing as the set progresses and the intensity and heat in the room builds and builds and is absolutely possessed by these eight songs, VLURE are absolutely more than the sum of their constituent parts. Alex's synths and backing vocals give subtlety and light and shade to the quieter moments such as The Storm and the glorious haunting intro to Euphoria that the audience sing along to, whilst Niall and Carlo's rhythm section provide the indestructible framework for the huge anthemic powerhouses like Desire, Heartbeat, Shattered Faith and Show Me How To Live Again while Conor is almost as animated as Hamish. 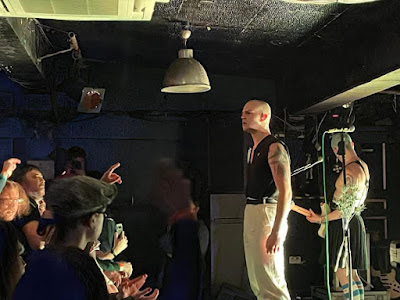 These songs are about life. The live for the weekend of Euphoria, the Monday morning resigned sigh to the excitement and hedonistic escape of the weekend that runs through Heartbeat and Show Me How To Live Again. The ghosts of the past haunting the mind in the present of I Won't Run (From Love), a moment that is meant to take the set down but simply makes the anticipation of the furious ending even more thunderous. The tenderness of The Storm that explores those dark moments alone where we question everything.
They're lived out in front of us by Hamish. He's amongst us a couple of times, one second veins in the next pumping as he reveals everything that's in his soul and mind to us in the lyrics to these songs, the next stopped dead still, staring across the crowd, surveying the mayhem with a sense of wonder and amazement before allowing a smile to appear across his face. 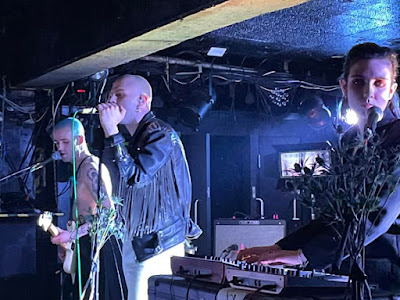 Even their cover of God Is A DJ feels like it was written for VLURE, the way music brings people together and allows them to express what you can't always build the courage to do on your own. Later on in the evening as the Tuts DJ spins some classic songs, Depeche Mode's Personal Jesus being one, we remark rather than it would be interesting to hear their take on the song that VLURE could have written this in another age. They have that the potential - to write era-defining music that will transcend boundaries and time, if they haven't already.
A sold-out Tuts gig is a rite of passage for a band from this part of the world, a legendary venue far beyond the city's boundaries. As you walk up the stairs you see a list of bands that have graced this stage over the years that have gone on to dominate the music scene for years. In a decade's time people will walk up them and VLURE will be the name people are looking for. Whether that's as one of the biggest bands in the world or a glorious shining star that exploded in a fleeting moment unforgettable to those that witnessed it, time will tell. But for now they are the most exciting exhilarating new band on the planet and the possibilities out in front of them are endless and this is a gig that will go down in legend.
VLURE played Desire, Heartbeat, I Won't Run (From Love), The Storm, Show Me How To Live Again, Shattered Faith, God Is A DJ and Euphoria.

The Euphoria EP is out now, with vinyl to follow in March.