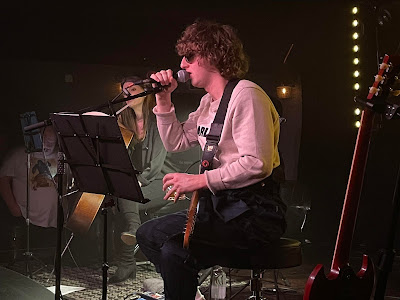 Wednesday night saw Jack from The Snuts perform a much-rescheduled set of songs from their number one debut album accompanied by a cellist in front of packed and vocal Manchester crowd at The Blues Kitchen. Support came from Newcastle solo artist Heidi Curtis.
The show is opened by the impressive Heidi Curtis who's opened recently for Sam Fender amongst others. She deals impressively with the sound coming from the bar at the back which carries badly due to the shape and acoustics of the room with a six-song set of five self-penned tracks and a cover of Chris Isaak's standard Wicked Game. Either on guitar or seated for final track Piece Of Our Wilderness, her songs are immaculately crafted and she delivers them with a voice that makes you feel like she's lived them and which draws your attention to her. 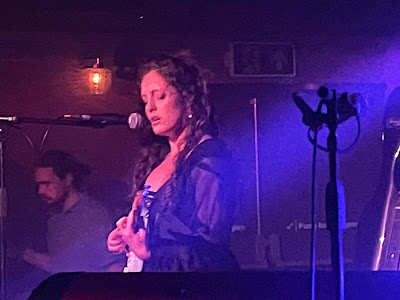 Like all good storytellers, she explains the stories behind the songs; two new ones about a friend who sold her ex's clothes on Depop (Out Of Sight) or the joys of going to Berlin and spending time discovering some of the city's lesser known attractions (Tempelhof) being particularly impressive. Those down the front listening give her a deservedly warm reception.
There's a real sense of anticipation as Jack takes to the stage accompanied by cellist Heather. It's a very different set-up to a traditional Snuts performance where the energy coming from the crowd fuels the audience which in turns stokes the band's fires even more. That sense of community and coming together is very much still apparent though, at times Jack is drowned out by the crowd singing back at him even though him being seated means that anyone further than three rows back might only get a glimpse of the top of his head given the low stage and roof at the Blues Kitchen.
"We're just gonna have a drink and sing a few songs" Jack tells the audience as he takes his seat to a deafening roar before adding "no talking during the show." With the majority unable to see much, that's optimistic when he's not playing, but the minute he kicks into opening track Glasgow, the only voices are a few hundred singing every word with him. Even though he tells us he hates playing songs acoustically, preferring his mates around him on stage, you wouldn't know unless he told you.
Jack regularly expresses his astonishment during the night that people relate to these songs he and his mates wrote in a flat in Glasgow or at a low time when they were taken out to Los Angeles to write, but it's the connection they make, being young, skint and not sure what the world is going to throw at you is a universal emotion and one that The Snuts managed to capture as they stormed the charts last year, helped by the multi-formatting and events like this. It's one thing to play those games but it's another to create such a community around them to fight their corner that they have. That extends to him sharing out his bottle of whisky with the front rows, joking with a super fan about him coming round for Christmas dinner before pleading "don't kill me." It's done with a Glaswegian modesty, charm and a little self-deprecation about wearing shades on stage, declaring that no one but him will care about the Dylan cover Don't Think Twice It's Alright and asking people to sing along that makes you warm to him. 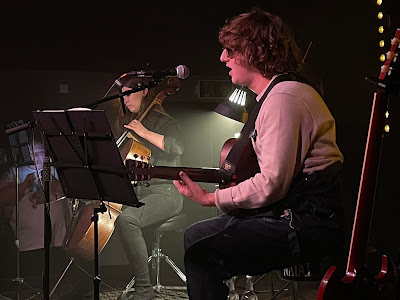 It's testament to the quality of the songs that stripped down to just guitar, cello and vocals they lose little of their impact and the stories Jack tells adds a little more context and history to them that makes them more affecting. Always is about being in love when everything is going to shit around you and the audience choir sings it back as if they'd written it themselves, Coffee & Cigarettes sings about two of life's simple pleasures while Top Deck and 4 Baillie Street go all the way back to their days in a rundown council flat when they felt nothing was going to happen for them. He recalls a then unknown Lewis Capaldi singing What's Going On back to him at T In The Park after posting it on Facebook nine years ago. The night finishes with a mass singalong of Boardwalk and No Place I'd Rather Go, aptly songs about coming together with those you know and love.
The Snuts might appear to the outsider that they're an overnight success, but as Jack talks more, it reveals that they've been at this for almost a decade, a group of mates who got a break which they've made the most of. They've won the hearts and minds of an ardent group of fans who turn out in force at every opportunity, some a little over-exuberant at times, and champion them to anyone who'll listen.
The Snuts played Glasgow, Always, Coffee & Cigarettes, Top Deck, 4 Baillie Street, What's Going On, Somebody Loves You, Seasons, Don't Think Twice It's Alright, Boardwalk and No Place I'd Rather Go.
Heidi Curtis's website can be found here and she is on Facebook and Instagram.
The Snuts' website can be found here and they are on Facebook and Twitter.
________________________________
Follow Even The Stars on Twitter at @eventhestarsuk and like our Facebook page for all the latest updates
Posted by Even The Stars at 21:14

Email ThisBlogThis!Share to TwitterShare to FacebookShare to Pinterest
Labels: Heidi Curtis, The Snuts